Whenever I go along to a cookery class or a food event I go with the intention of learning something. In most cases, the tutor or teacher has acquired a certain level of knowledge and is keen to pass it on. In the case of my recent masterclass for food bloggers and writers with Marco Pierre White, we had the added benefit of being shown three recipes by a British chef, who by the age of 33 had been awarded three Michelin stars. That’s quite something and it was certainly a privilege to be invited into Marco’s kitchen again to watch him cook. 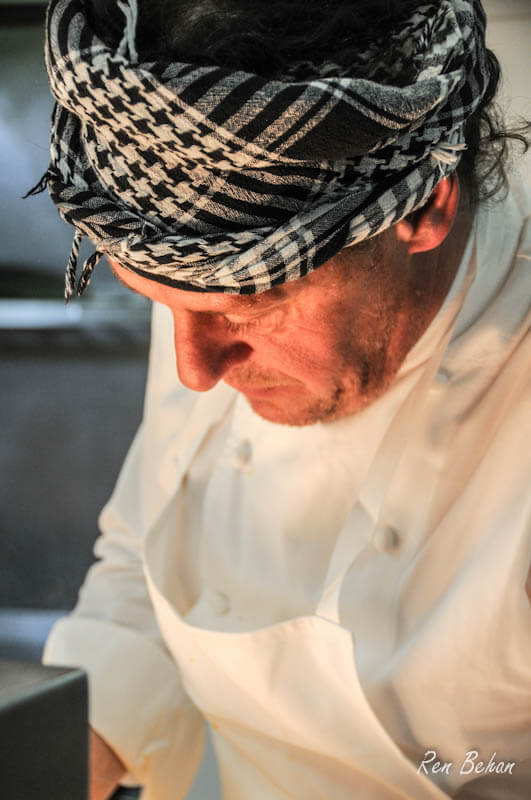 It has to be said, that the majority of home cooks don’t go to the trouble of regularly making their own stocks from bones, as they do in most professional kitchens.  Having said that, the quality of some ready-made stocks is pretty good and most home cooks are likely to have a stock cube/pot or two in their cupboards.

Since retiring as a professional chef and famously handing back those stars, Marco Pierre White has been able to focus on commercial relationships and on his fleet of restaurants. It was at one of his restaurants, Marco at Chelsea Football Club that he stepped back into his kitchen to cook for us. Marco has also worked as a brand ambassador for Knorr UK for some time and so the recipes we were shown were recipes that he has developed for Knorr. On this occasion, Marco used fresh seasonal produce, basic store cupboard ingredients and some Knorr Stock Pots.

The idea was not to prove that ready-made stocks are any better (or worse) than homemade stock, but to demonstrate how to build layers of flavours in your food. In particular, the day’s cooking focused on ‘one pot’ cooking and on how to enhance the flavour of your finished dish by using fresh fruit juice, such as carrot juice or tomato juice along with a stock pot. Marco also boosts his beef stews by mixing a beef stock pot with prune juice or dark ale. In the same way, a chicken stock pot can be mixed with apple juice when cooking pork. 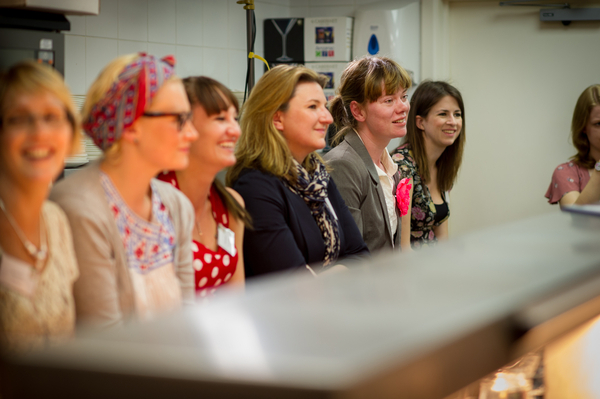 Having been trained by Albert and Michel Roux at Le Gavroche, as a young chef Marco was taught not to waste anything. And so it was, that Marco used every bit of the asparagus spears, adding the trimmings to the stock, rather than snapping them practically in half and throwing the woody ends away. He was also told by Albert Roux to “never be intimidated by the stove” and that advice is perhaps something that many home cooks could take on board, too.

As Julia Child once said, “The only real stumbling block is fear of failure. In cooking you’ve got to have a what-the-hell attitude.” I would say that Marco was a little more disciplined than that, but the basic point is the same; don’t be afraid to experiment with flavours and do give new things a go. 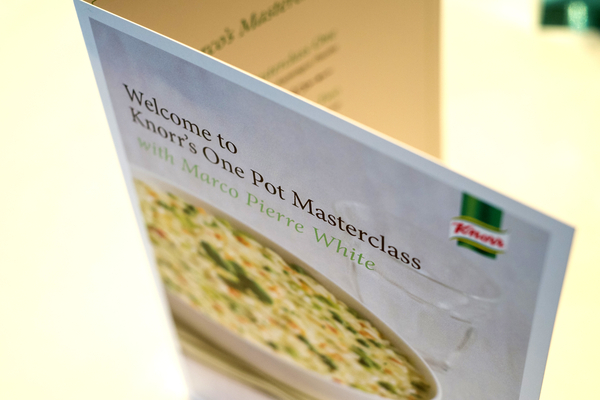 Marco’s Top Tips of the Day

Through these three recipes, we were shown some simple tricks on how to build flavours in a one pot dish, without over-seasoning or piling in extra salt. 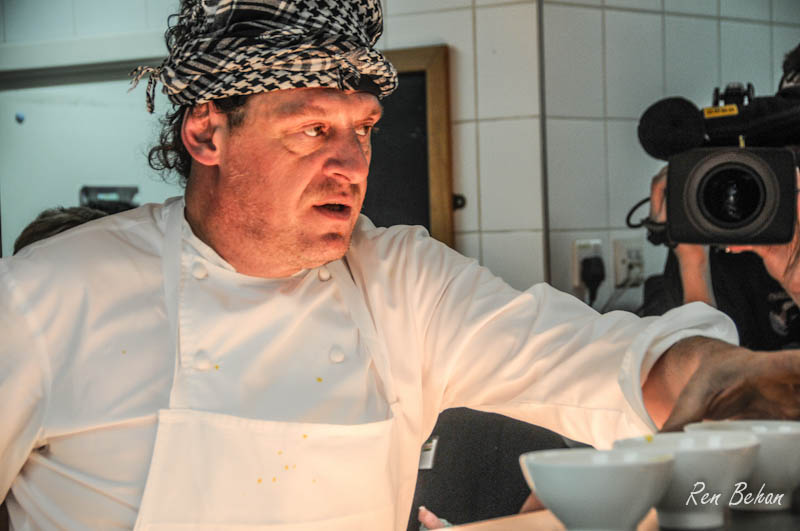 Although Marco used a pumpkin in his first recipe, you could just as easily use a butternut squash, sweet potato or even seasonal carrots to get the same idea here.

Just a few ingredients were used in this recipe, but the result was a smooth, silky, sweet yet savoury soup. My children are big fans of this soup and mixing the carrot juice with the stock is an excellent way of adding extra nutrition to a simple supper.

You can find the recipe and watch a step-by-step video here.

Again, the emphasis is on building flavours whilst keeping the cooking straightforward. Many people are fearful of cooking risotto, but as Marco says, don’t let the stove intimidate you. Prepare your ingredients, set aside twenty minutes, and follow these steps.

We love risotto as a family and I will definitely use my washed asparagus and other trimmings as a way of adding more flavour to my stock in future.

You can find a Spring Vegetable Risotto recipe here. 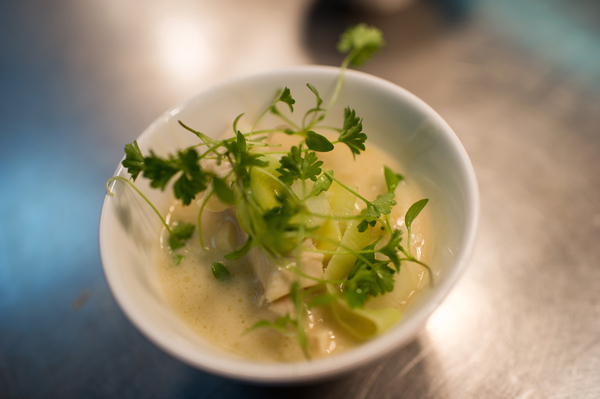 Marco’s top tip in this recipe was to use a pre-roasted chicken. This is because chicken cooked on the bone (and roasted) will add more flavour and the meat will also be tenderer. If you are roasting a chicken for dinner, you could roast a second one and use it to make a quick casserole. If you are pushed for time, you could even buy a pre-roasted chicken from the supermarket.

Having tried Marco’s casserole and more recently at home his recipe for Chicken Chasseur, I can now see that you can cook a casserole in around twenty minutes without compromising on the flavour. Using flour at the beginning, by either making a roux or coating your chicken pieces in flour before pan-frying, will add to the thickness of your finished sauce.  No more watery casseroles!

After the high heat of the kitchen, we were all keen to get out into the restaurant to try the finished dishes. I certainly came away with plenty of new tips to try and incorporate into my kitchen at home. I hope you’ve found them useful, too! 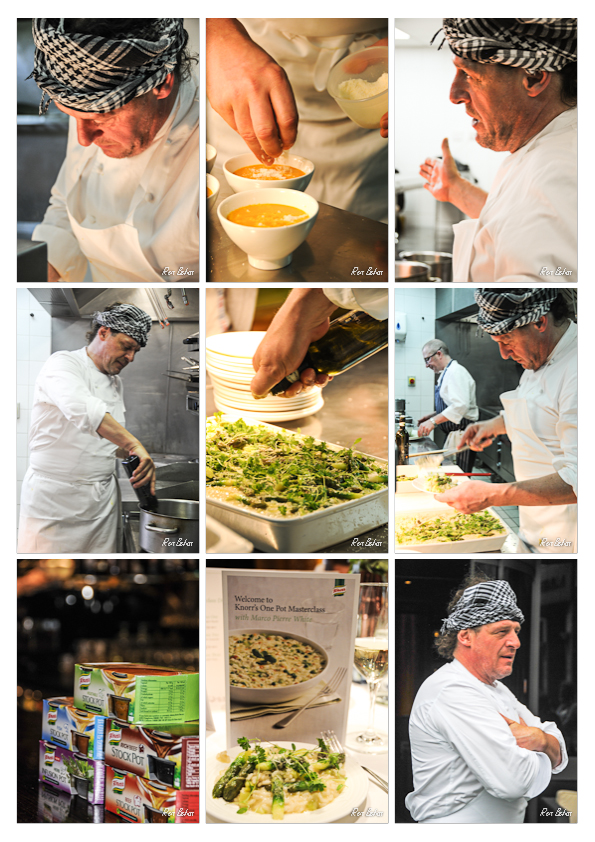 With many thanks to Knorr and Marco Pierre White for an informative day.  Knorr did send me away with some stock cubes, but the stock cubes did not influence me to write about  my experience.

I will be working with Knorr and selected food producers over the coming months to try more of Marco’s recipes at home and will be offering you the chance to win some ingredients, too.

Have you ever tried mixing stock with fruit juice? Are you a fan of Marco and his cooking?!