Last week I was invited to attend an event hosted by Knorr to launch their new ‘Best of British’ campaign. Now I don’t usually get that excited about stock cubes, as such, but add in an invitation to Marco Pierre White’s restaurant ‘Marco’ at Chelsea Football Ground and throw in the man himself and the excitement levels are building! Aside from having the most complicated lead-up to attending an event in the world (on my side) when I did finally get there, I had a great time and most importantly, came away with plenty of tips to share. 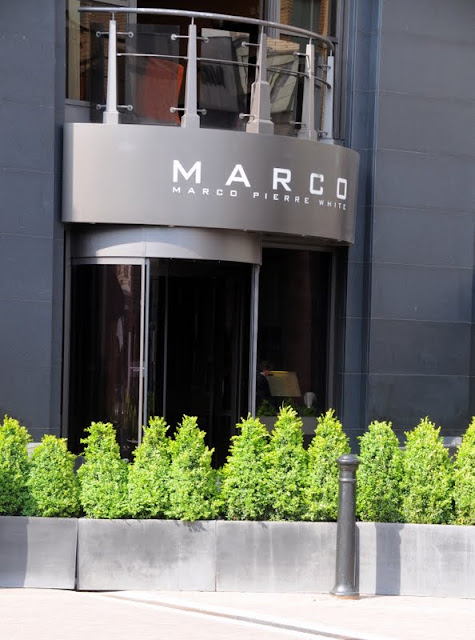 If truth be told, I was probably a little bit apprehensive before the event. After all, Marco Pierre White has something of a fierce reputation; ejecting diners who make rude requests from his restaurants and putting celebrities through their paces on Hell’s Kitchen. But there is no doubt he is a culinary legend; one of the very first celebrity chefs and certainly one of Britain’s finest. Having been born and bred in Yorkshire, he began his training in Harrogate before moving to London to train under Michel and Albert Roux at Le Gavroche and then under Pierre Koffman and Raymond Blanc before branching off on his own and very quickly rising to the top. By the time he was 33, he had been awarded three Michelin stars; the youngest chef ever to have done so. 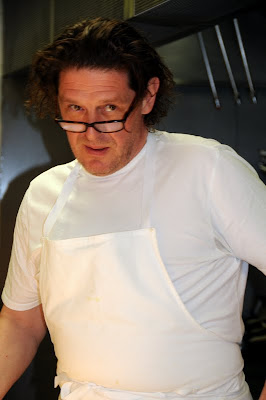 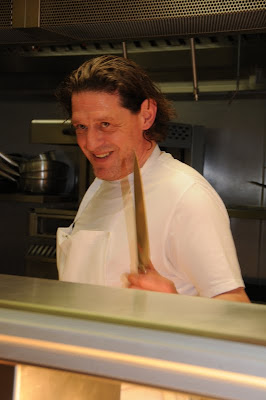 The kitchen is most certainly Marco’s domain and aside from being in possession of a very sharp Japanese knife (he only uses one, a sashimi knife) and theatrically clattering a few plates around, he was actually very warm and keen to share snippets of his knowledge and ‘philosophies’ with us. When asked about what influenced him, he told us that he believes we are all influenced, in some way, by the food of our childhood. He joked that it took him years to admit that he loved salad cream and that, in that actual fact, he used Knorr stock cubes long before Knorr approached him to endorse the brand. He was also asked about his thoughts on ‘sustainable fishing’ and replied that, in his opinion, throwing under-sized fish back into the sea demonstrated “all the logic of a madhouse” (my favourite quote of the day). We also quizzed him about the provenance of his produce and he replied to all our questions in a very friendly manner. I think, perhaps, Marco has mellowed. 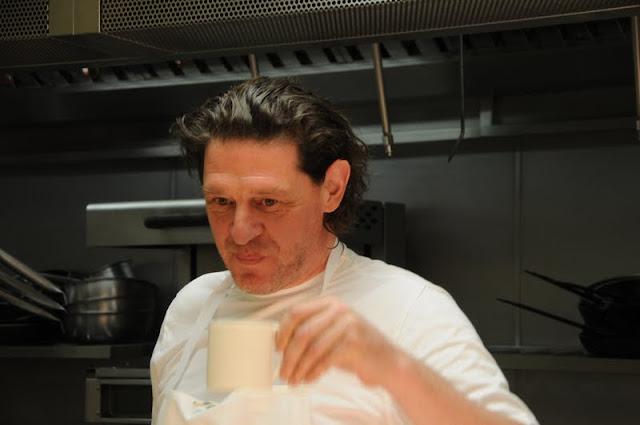 So, apart from getting to meet Marco, what did we learn? Well, the focus of the day, was, obviously, Knorr Stock Cubes. Marco was quick to point out that they are a very versatile kitchen ingredient and that he always has them to hand. He uses them in his own cooking, not simply to create stocks, but as seasoning and to help ‘build’ flavours (a very cheffy term). There really is no great secret when it comes to cooking great tasting food, though, as Marco says, a stock cube will help you along, as will some good quality ingredients. Marco is also keen on ‘thinking outside the box’ when it comes to cooking. So, for example, rather than just making up a stock cube with boiling water, Marco mixes them with other liquids – pure apple juice when making Pork with Cider, with prune juice when making Beef in Guinness. (If you are cooking for kids and are worried about the salt levels Knorr has a range of Reduced Salt Stock Cubes available which are worth keeping an eye out for.)

Aside from this, Marco has also developed a technique for making a quick paste to use as seasoning, which was the main technique he focused on using during the masterclass.  By simply mashing a stock cube with some good olive oil and a few herbs of your choice and then rubbing this paste onto meat or fish, you can make a plain steak, or even a piece of chicken or tuna, taste really good. No other seasoning is required.
For the steak seasoning, Marco made a paste using a chicken stock cube, some olive oil and finely chopped rosemary, which was rubbed into a rib-eye (Marco’s favourite cut) before being cooked in a very hot griddle pan. Seasoning with a stock cube rather than with just salt means that the flavours seep in rather than bringing the water out. 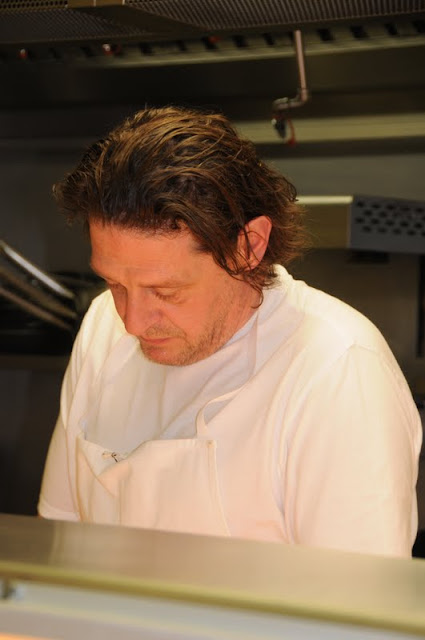 The Knorr seasoned steak did indeed take very good and the paste was easy to make so this is definitely a technique I’ll be using at home. There is a video on the Knorr wesbite which shows you how to do it –Marco’s Steak Challenge
Marco then showed us how to make a delicious fresh tuna steak, again using a Knorr chicken stock cube to make a paste. This was served with a caper, olive and fresh tomato sauce. It was good to know that a chicken stock cube paste works really well with tuna, so there’s no need to buy or use a fish stock cube if you don’t have any to hand. 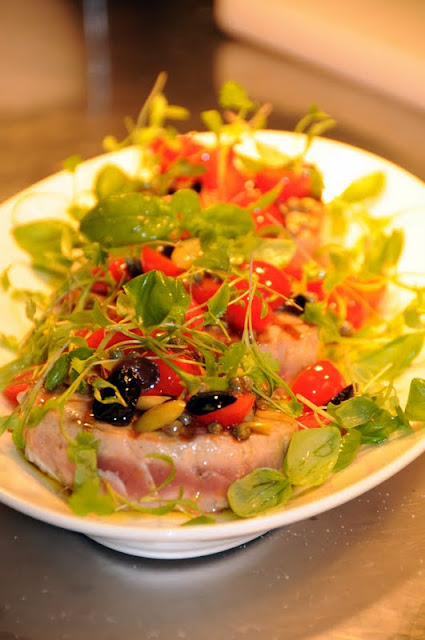 Here’s the recipe for Marco’s Grilled Tuna Steaks ‘a la Nicoise’
Finally, after jointing two chickens in seemingly just a few minutes with his super sharp sashimi knife, Marco seasoned chicken breasts, this time by rubbing in a paste made of a chicken stock cube, olive oil, then adding lemon zest and thyme. His top tip here is to place the chicken breasts, with their skin on, into a cold pan, rather than a hot pan. This allows the fat on the skin to render down slowly and become really tasty and crisp, rather than putting them directly into a hot pan which will make the skin rubbery. This technique also works for duck breasts. He added the thyme stalks into the pan too, cooked them skin side down for around six minutes and then placed them in a hot oven to finish cooking. 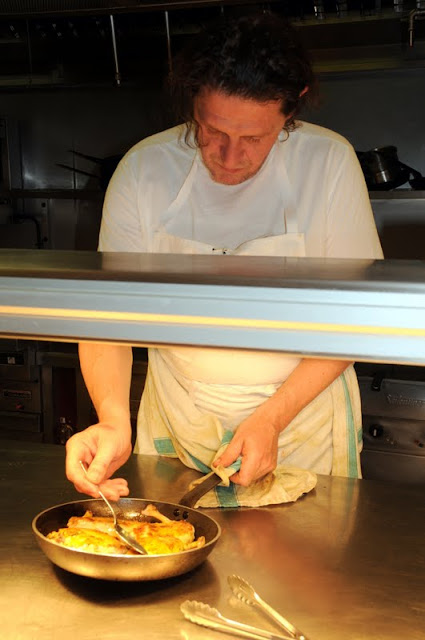 Masterclass concluded, Marco took our orders for lunch (steak, chicken or tuna – I had the chicken as it tasted so good) and we were treated to a few lovely glasses of wine at our tables as well as having an opportunity to chat with Marco and the other guests. One of the sides served with our meal was really worth a special mention – a lovely carpaccio salad of beetroot, goat’s cheese and walnut, drizzled with olive oil – which, along with new potatoes, made the perfect accompaniment to our ‘well seasoned’ lunch! 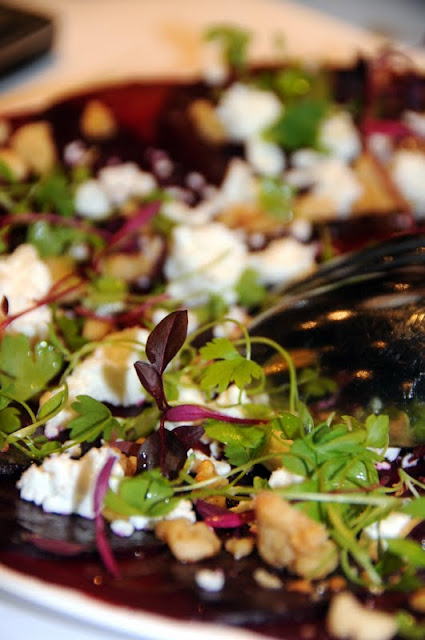 Look out for more recipes from the Knorr ‘Best of British’ campaign to come featuring plenty of seasonal British produce as well as some classic British recipes. Knorr will also be kindly sending me some seasonal vegetable boxes and more recipes to try at home which I will be sharing with you over the next few months. 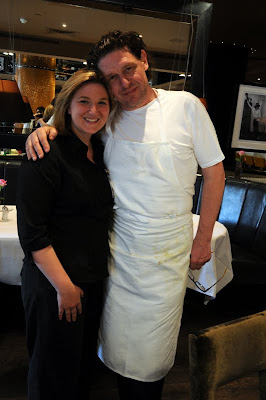 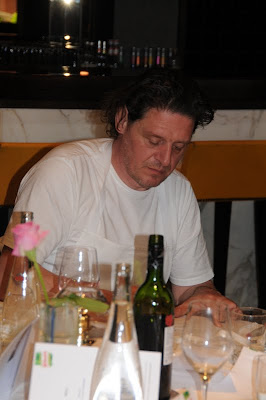 With many thanks to the team at Golin Harris – Jen, Neil and Alistair and to Knorr for the invitation to the event.