The Queen’s Diamond Jubilee weekend is getting closer and I’ve been getting creative in the kitchen with a lovely box of ingredients, sent to me by online British gourmet food specialists, Forman and Field . The chaps over at Forman and Field love a good party, so they challenged a fine group of bloggers to create “a fabulous, magical, celebratory and most importantly delicious cake or sweet treat in honour of Her Maj’s Jubilee.”

Forman and Field are no strangers to quality events and catering, they recently catered for an Ascot polo party where, according to the Forman and Field blog, Her Majesty commented that Forman’s gluten-free brownies were the best she had ever tasted. With that in mind, I knew the ingredients would speak for themselves, so I wanted to mess around with them as little as possible!

I did however, want to create something special; a taste explosion with an unusual combination of ingredients, but with a classic twist. We were told to “Think British! Think street party! Think pretty!” I was particularly lured by the Forman’s own home made Crème Anglaise and the Forman’s Lemon Curd and I though both would go make a jolly good trifle…paired perhaps with seasonal British raspberries and lashings of fresh double cream… 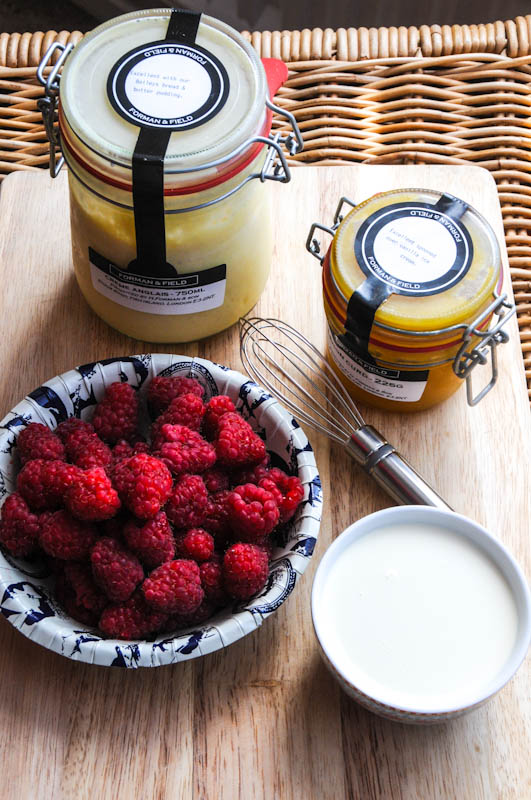 I then began to think about tray-bakes, again, perhaps with pears, the chocolate, the elderflower liqueur, but my mind kept on coming back to the lovely Forman’s home made Crème Anglaise and the Forman’s Lemon Curd. With the weather being so sunny, I didn’t really want a hot pudding. So, I came back to the trifle idea on the basis that no street party would be proper without one, and came up with these… 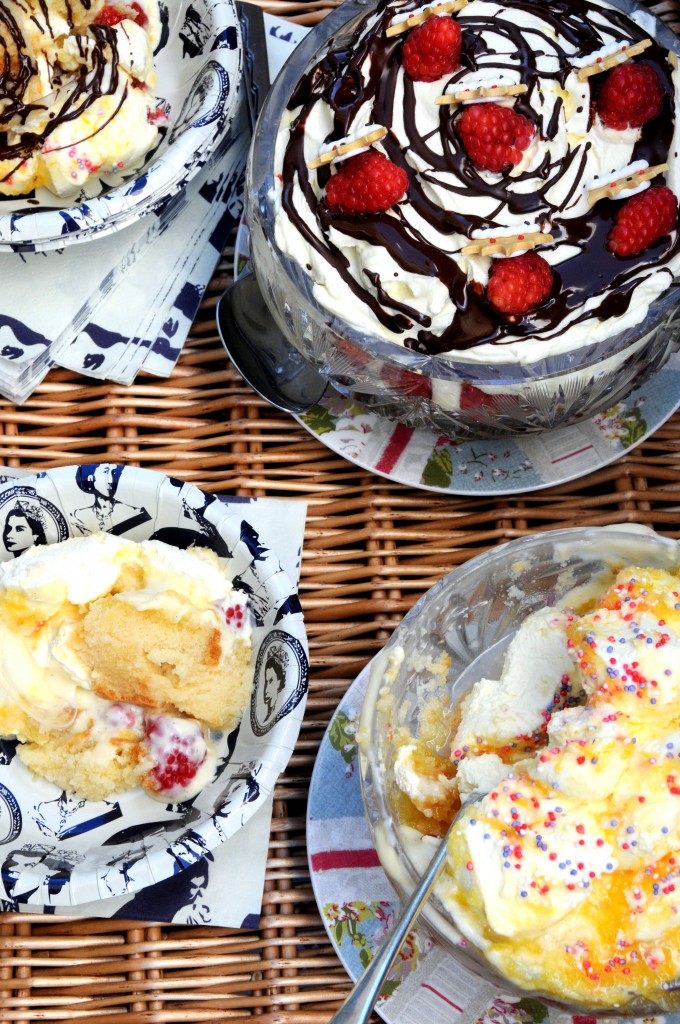 The first one (and my entry to the competition – see recipe below) was made with a basic sponge using the Dove’s Farm organic flour and the farm unsalted butter. If you have less time on your hands, just use a plain Madeira cake, left over cupcakes or even sponge fingers.

I then enlisted the help of the British elderflower liqueur (after a quick tipple with some crushed ice, it was a hot day!) soaking up small pieces of the sponge in the liqueur before placing it into a trifle bowl. Next came a burst of fresh British seasonal raspberries, with a good few dollops of  the Forman and Field zingy lemon curd over the top. Along came lashings of Forman’s Crème Anglaise, just poured over the sponge and raspberries. Finally, I then whisked up some double cream for the top.

I was left with the dilemma of whether to go all out and use the Original Beans Cru Virunga chocolate buttons. After sampling a few, I decided to melt the rest in a bowl over a pan of simmering water.  I left the chocolate to cool a little (hoping it wouln’t melt the cream). Then I was brave and drizzled around half of the melted chocolate over the cream with a teaspoon, finishing off with a few raspberries and six golden crowns. If you save a bit of the melted chocolate, you can also use it to drizzle some over individual portions to make them look extra pretty! 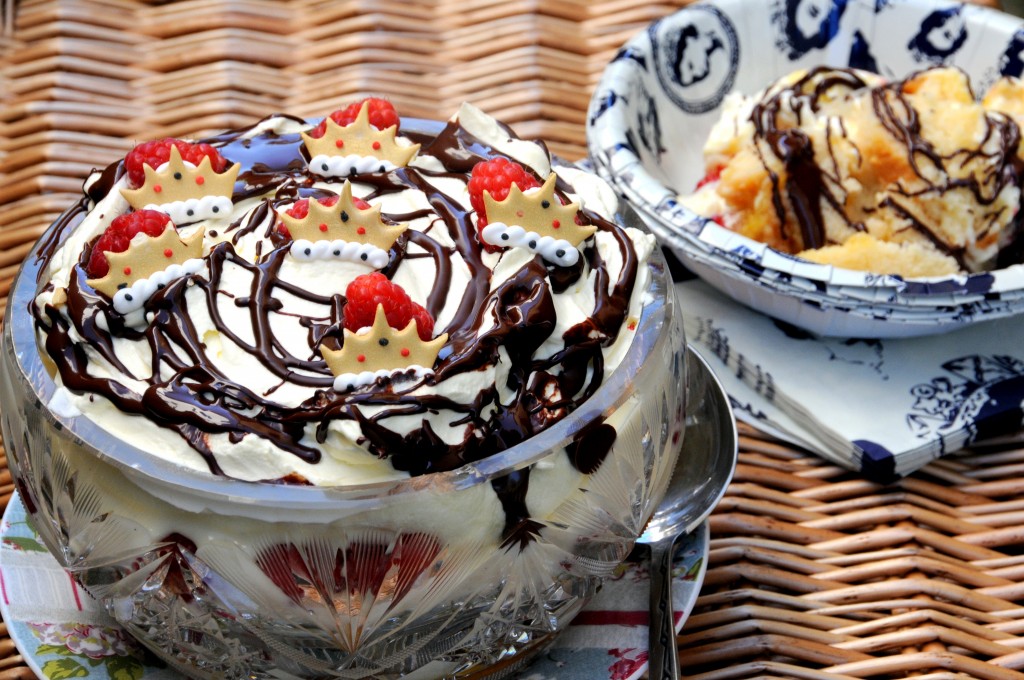 The second trifle was a bit of an after-thought. The children were hovering and were desperate to try some, so whilst they licked what was left of the melted chocolate bowl, I made another trifle, using apple juice instead of the Elderflower liqueur, drizzling more lemon curd over the top instead of melted chocolate as well as a good dose of Jubilee sprinkles. 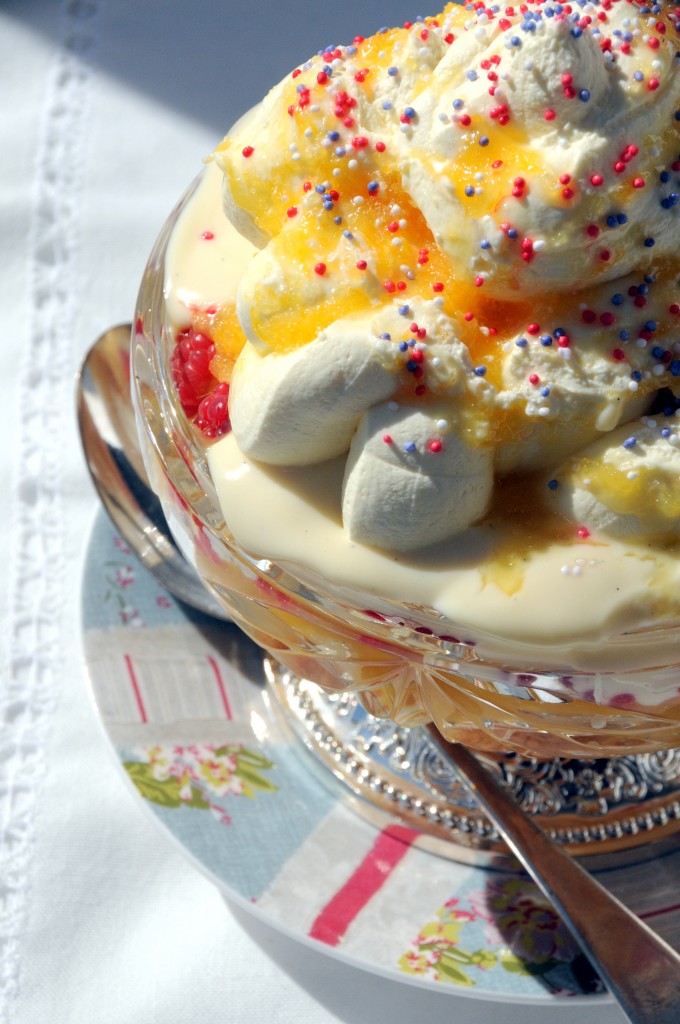 After all my trifle making, I was torn as to which one to enter into the bake off! I thought they were both equally delicious. The first one was special as it contained so much of the lovely Elderflower liqueur. The second one had a bigger zing because I used more of the lemon curd. I will be making both for our own Jubilee Street party, but since the elderflower and chocolate trifle used two extra ingredients from the box, I’ve decided to go with that one as my entry to the Bake Off! 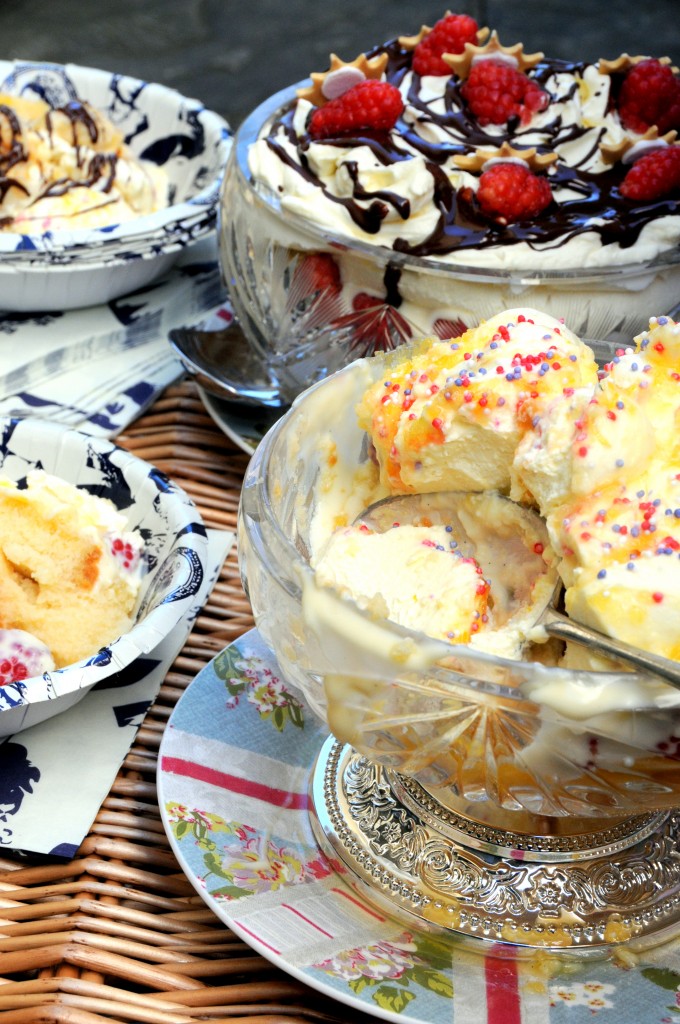 Since I’m in with a chance of winning an amazing Olympic dining experience at Forman’s Fish Island restaurant, I hope I manage to beat off some of the stiff blogging competition I am up against. I also hope I’m not playing it too safe with a trifle!? It did contain some extra-delicious ingredients, after all and you really can’t have a street party without one!

Only time will tell!

A chef at Forman and Field will be judging all our entries on 31st May 2012. He/she will then chose the winner and a runner-up. You can keep up to date with news from Forman and Field through their blog and by following their tweets on Twitter on either @FormanandField or by searching the #FormansJubileeBakeOff hashtag.

With many thanks to Forman and Field for the extra-special box of ingredients, the quality of the produce I could chose from was really exquisite!

What would you have made with the mystery box of ingredients?!