My mother (who is an amazing cook) can always make ‘something out of nothing’ and I’m hoping that this recipe will always remind me of that. 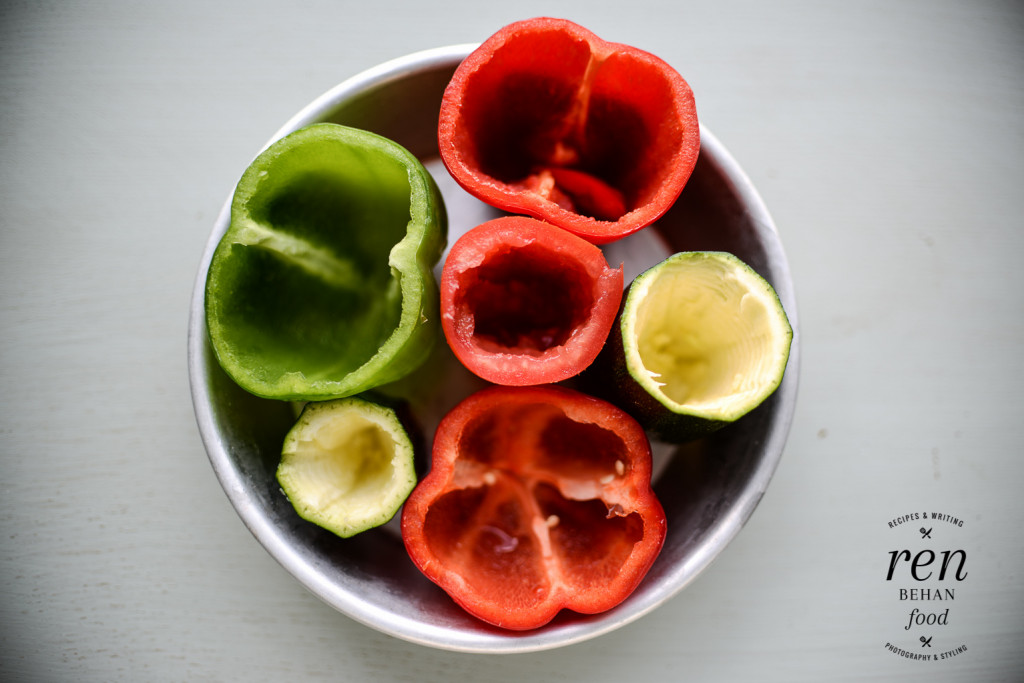 Last week, when my mum came to stay, I was completely on the back foot. I hadn’t managed a big shop and the fridge was uncharacteristically empty. We found a few red and green (bell) peppers, two courgettes, a plum tomato, a stick of celery, a carrot and a cup of leftover peas. There was also a chunk of Parmesan cheese. The obvious solution would have been to make a pan of soup, but I fancied something a bit more substantial than that. “We”ll stuff the veg!” declared my mum, and after a quick whizz of my cupboards she found some vegetable stock, a tin of tomatoes and one of those two-minute pouches of rice. Yes, I have those in my cupboard. 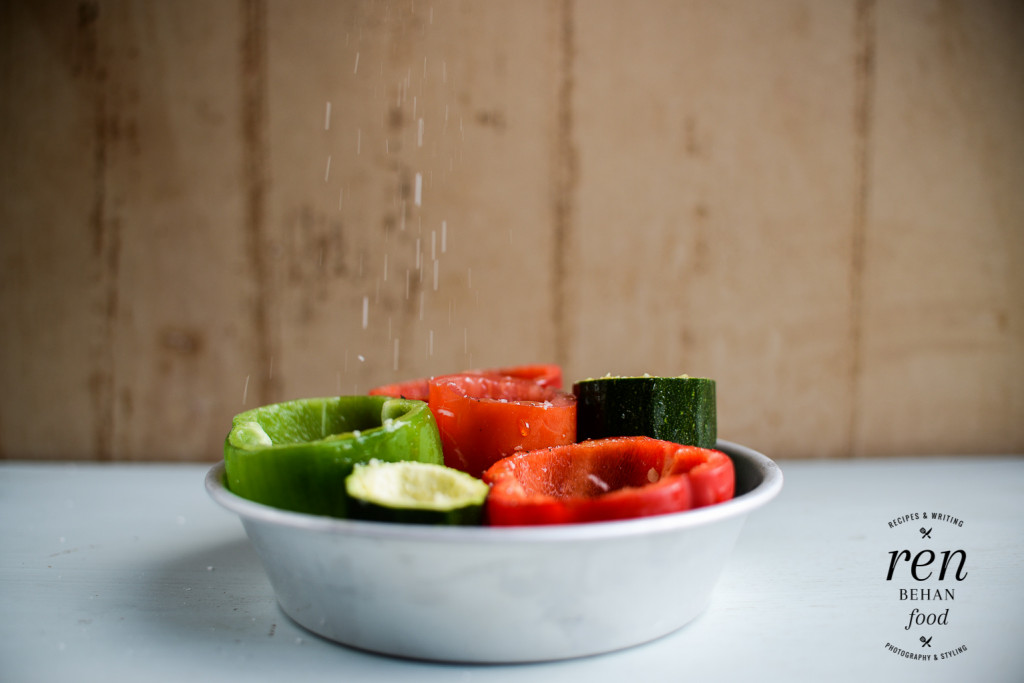 Within minutes the kitchen was filled with the aroma of a bubbling ‘quick’ risotto and after a sprinkle of some sea salt and fresh pepper, the vegetables began baking in the oven. 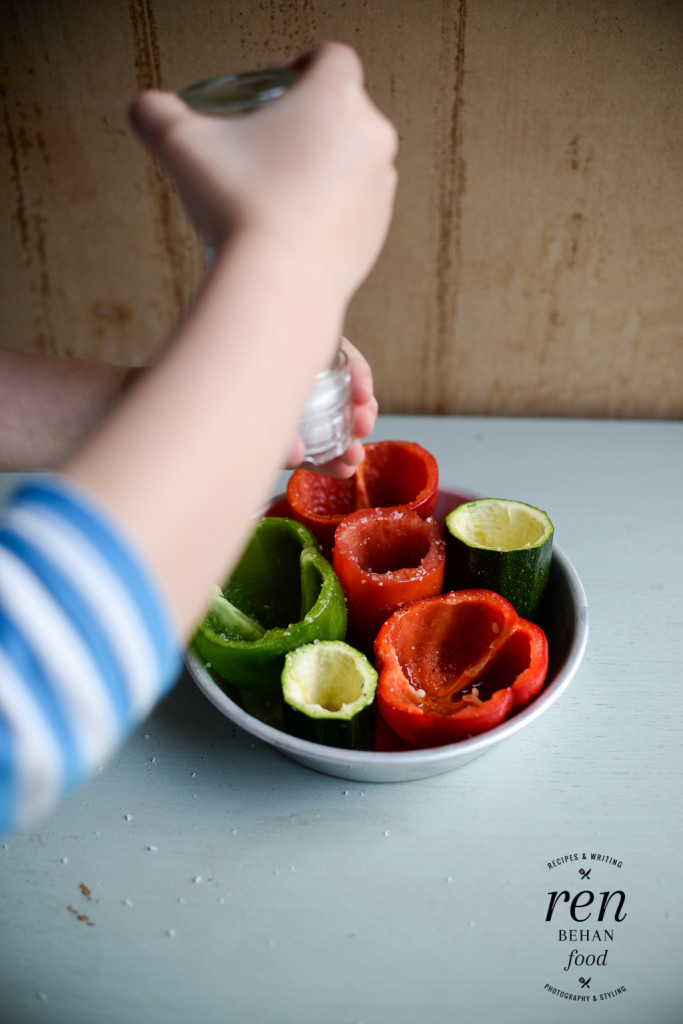 The pre-cooked rice was really the key to the speediness in this recipe – you can shave off a good ten minutes. If you had some leftover risotto, it would be quicker, still and you could just use that to stuff the vegetables with instead. You can also buy a quicker cook ‘pronto’ version of risotto now in pouches, too, though I haven’t tried those. You can even make it with ‘easy cook rice’ – you’ll just need to simmer it a little longer. The rice should be ‘almost’ cooked before you stuff your vegetables with it. 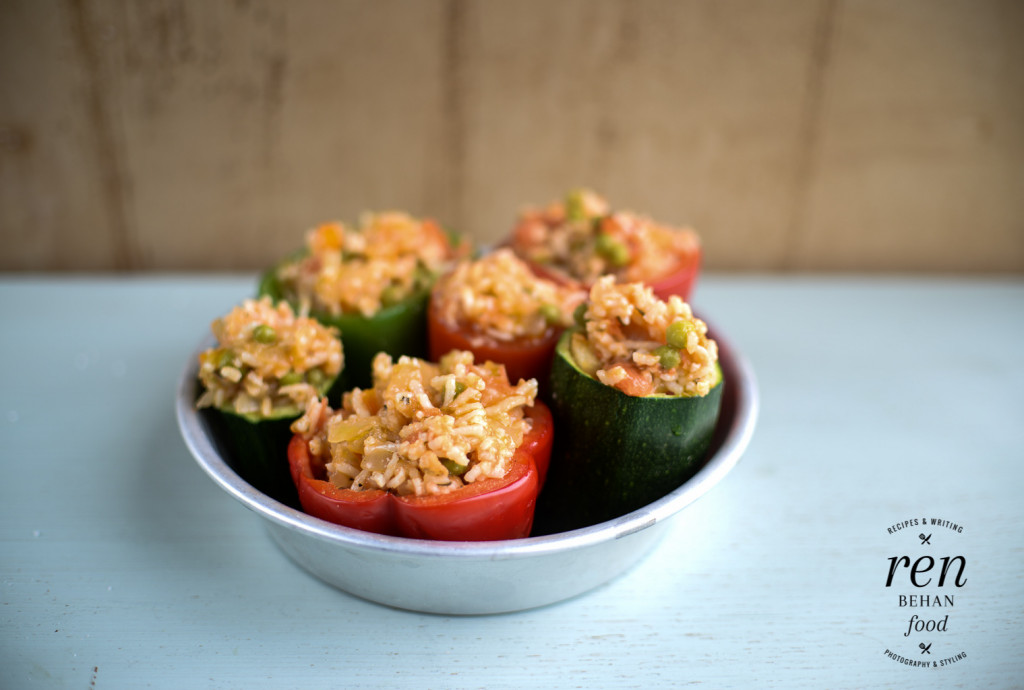 Once you know how to stuff veggies (always pre-bake them for at least ten minutes before stuffing just to get them going a bit) you can make all kinds of fillings. You can even stuff them with a bolognese ragu like this one.

And look what you end up with – Risotto-Stuffed Vegetables – fit for a King or Queen. 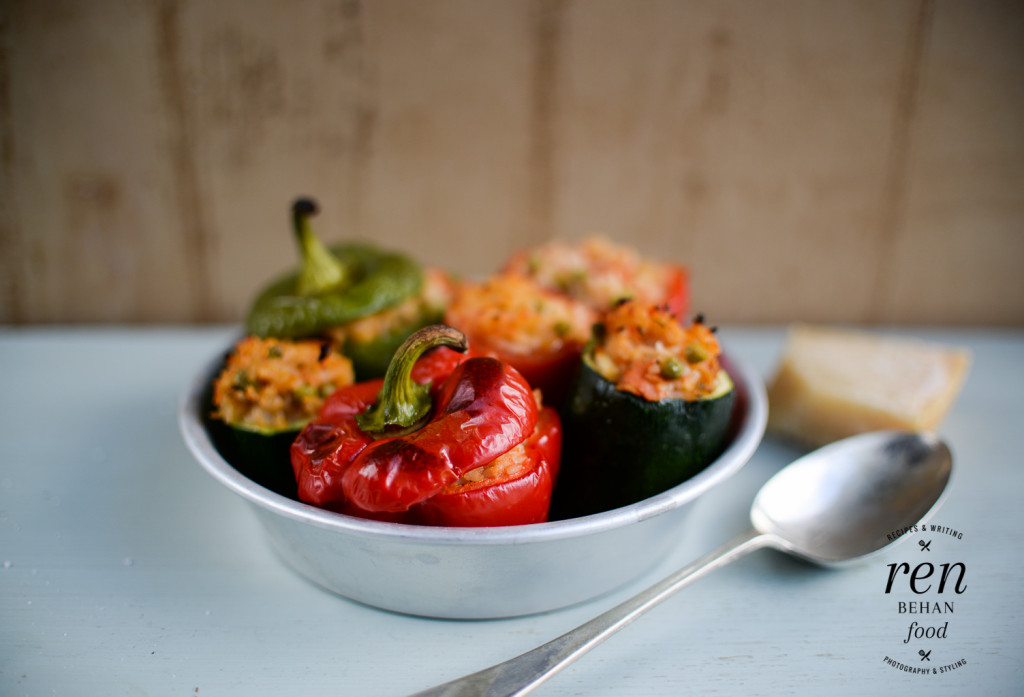 We serve ours with some tiny cubed courgettes and a really good sprinkling of Parmesan cheese. 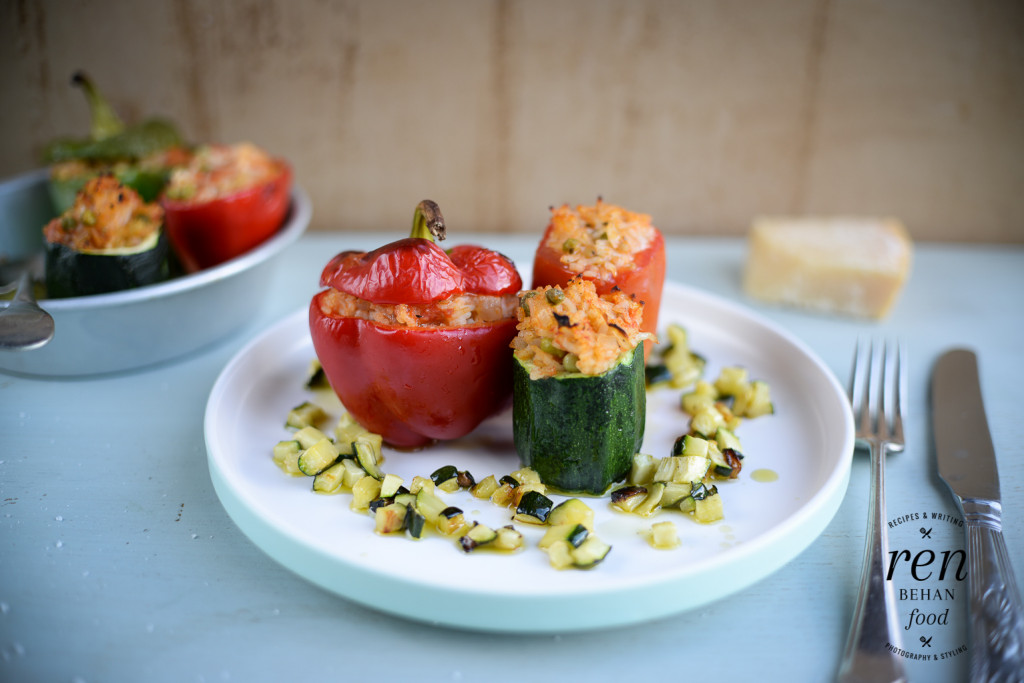 My mother might just be the cleverest cook in the world. She’s always an inspiration to me.

I hope you’re enjoying the (slightly blustery) autumnal weather! If you are not, make these instead, then stay inside and keep warm and happy. 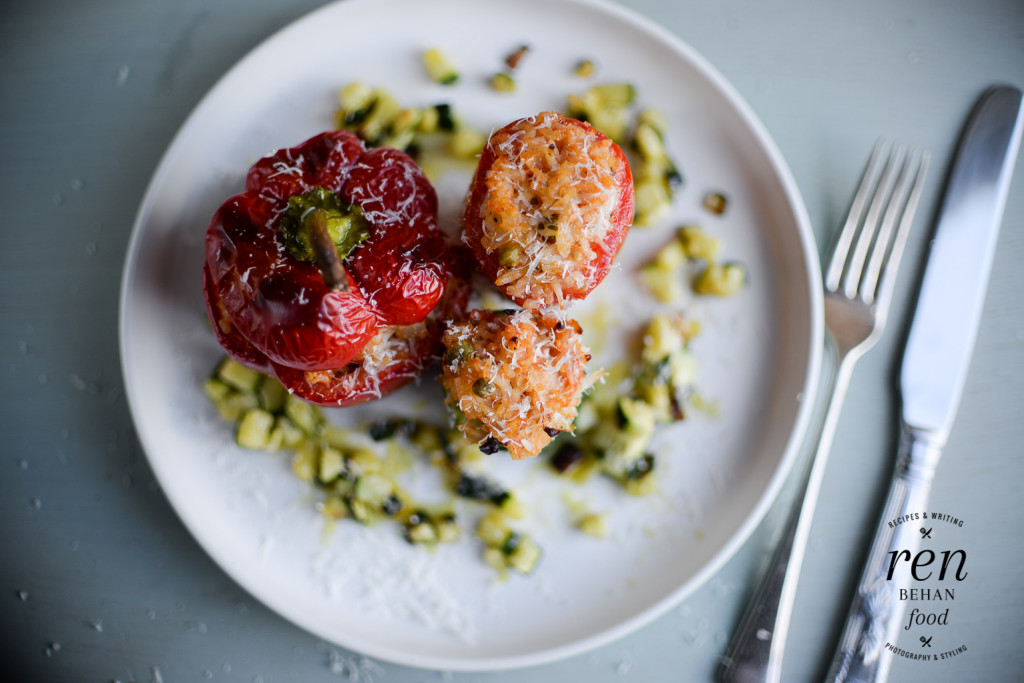 Ooh, if you wanted to stuff your veggies with a traditional risotto – follow my tips over on JamieOliver.com here.

Read all about my trip to Lombardy and Piedmont, with Riso Gallo, who produce one of Italy’s best brands of rice. 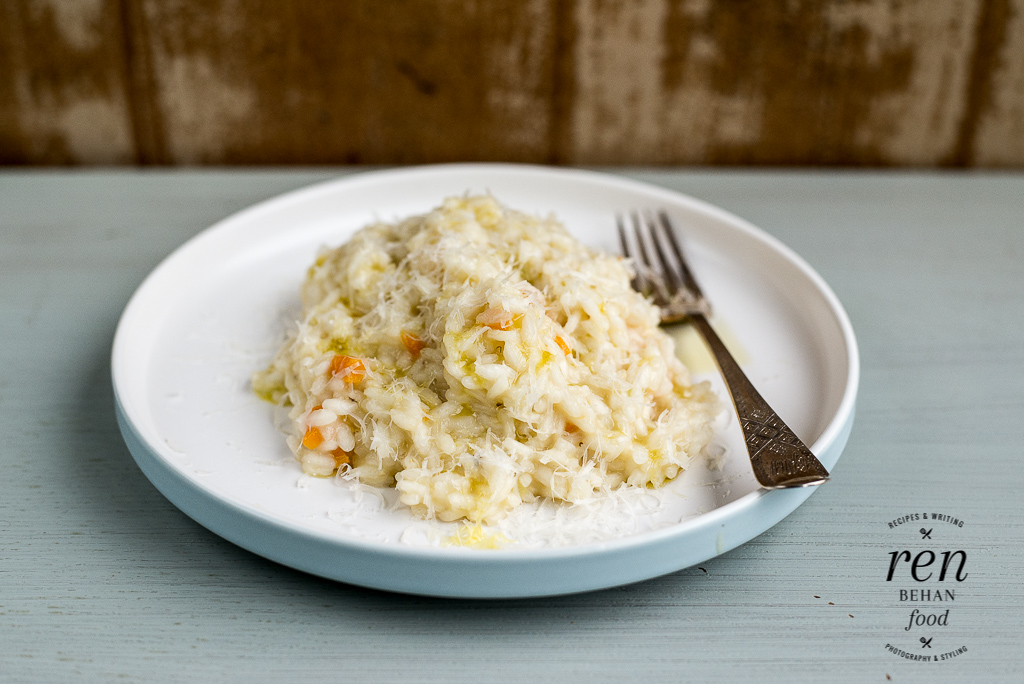