So, my event-of-the-year is fast approaching, although it is actually last year’s Christmas present from the lovely Rich and Anna. It is an invitation for hubby and I to attend an Evening with Raymond Blanc at the luxurious Le Manoir Aux Quat’ Saisons.  I’ve waited almost a whole year, still in the same level of shock as when I opened the envelope on Christmas Day.  With just two weeks to go, I am now actually tempted to make a little Raymond Blanc advent calendar for this very special occasion.

Monsieur Blanc is my culinary hero.  His passion for food is infectious and he seeks out only the best.  A day at his cookery school at Le Manoir in Oxford last year confirmed this.  There was an amazing buzz about the whole place despite the fact that he was out filming that day.  His influence is always present.  He is mysteriously all-seeing and all-knowing despite his physical whereabouts.

As a cookery school student for the day, one of the things that struck me was that Raymond keeps no secrets.   In his kitchen, provenance is king and he is happy to shout about it from the rooftops.   The provenance of every single piece of fish or meat sourced is documented and cataloged.  In most cases, even the animal’s mother is listed and named (obviously not in the case of fish!)  Many fruits and vegetables, if not sourced locally, are grown at Le Manoir’s most beautiful gardens, meaning that seasonal produce is in abundance and is most often used.   In his pursuit of the freshest and best Raymond works through hundreds of tastings of fruits, vegetables, meat and poultry to develop and source only the best breeds possible.

Happily cruising along at the cookery school, having picked some of our own ingredients from Le Manoir’s abundant garden, we were shown how to cook (and in some cases left to cook ourselves) an amazing array of fabulicious and visually stunning dishes.   They included New Season Asparagus with Poached Egg, Shetland Organic Salmon with Spring Vegetables and Chevril Jus, Sauteed Squid with Chickpeas and Pak-Choi, finishing off with Crepes and a tantalising Caramelised Banana and Semolina Souffle.  And yes, I have since managed to recreate some of the recipes myself at home, so no Michelin stars required to cook them. 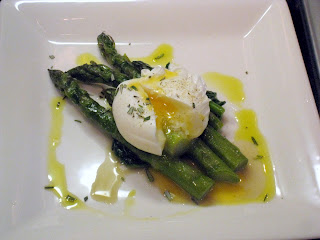 The highlight of the day?  As though cooking and eating all of this amazing food wasn’t enough, was Raymond himself arriving back at Le Manoir after a busy day of filming for the BBC’s The Restaurant.  Dressed in a pristine designer suit (which subsequently got splashed with olive oil)  Raymond walked straight into the cookery school kitchen.  Brushing aside Vladimir Niza, the tutor, Raymond promptly began finely chopping his parsley to personally demonstrate his Lamb’s Liver with Persillade recipe.

As we tasted the lamb’s liver, which incidentally was truly delicious, Raymond insisted that a portion of our next dish, Spaghetti with Vongole, be brought straight up to his office.  So technically, I can say I cooked for Raymond Blanc, right?  With a warm “Thank you and good bye” as if speaking to old friends, Raymond left as quickly as he had entered, leaving a tiny bit of his passion for food behind.  Just enough to make me desperate to go back again.

And so, back to my two-week countdown.  Perhaps I can fill my Raymond Blanc advent calendar with Valhrhona Chocolate, which happens to be the chocolate that Raymond proudly uses at Le Manoir.  I am bursting with anticipation at the thought of actually eating at Le Manoir, sipping Ruinart champagne and listening to my hero giving us a Taste of his Life.  I can hardly contain myself!

How about you? Is there a chef who fills you with awe? Have you met them and what did you think?