This week I was invited back again as a guest on Nick Coffer’s Weekend Kitchen on BBC Three Counties Radio. I’ve really enjoyed popping into the studio over the last year with my ‘Ren Recommend’s’ slot, where I let people know what seasonal treats to put in their basket for the week, but it’s always extra fun to be invited in as a guest. If you haven’t heard the show, it’s a two-hour dinner party over the radio, where three guests come in each week with food that they’ve cooked, to chat about their foodie interests and backgrounds with host Nick Coffer of My Daddy Cooks, who is a keen cook himself and a cookery book author. Guests are usually local and based in the Three Counties, but anyone can tune in online via iPlayer and the show is available up to the following week too.

For the last couple of weeks, the food during the show has had a festive feel to it, featuring Italian Christmas food, as well as vegetarian Christmas food by fellow St Albans food blogger Clare Rudd of The Vegetarian Experience. Nick and producer Emma thought it would be interesting to tap into my Polish roots to talk about Polish Christmas food, so off I went to the studio to warm everybody up, armed with a Winter Mushroom Soup, Pierogi (stuffed dumplings) and a Sernik, a Polish Baked Cheesecake with Raisins and a Cranberry Compote. 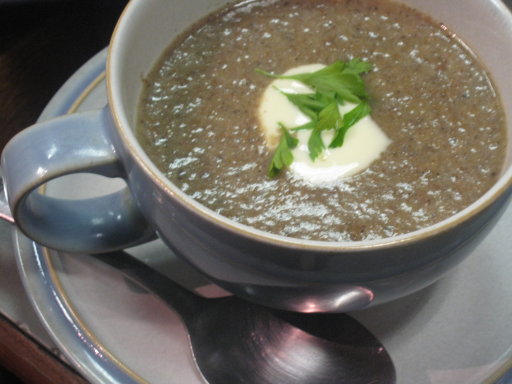 Great fun was had by all as this week, the usual wine matching element had been replaced by festive cocktails mixed by Islay Kennedy. Islay knocked our socks off with her Christmas Fizz cocktail, well worth making on Christmas Day! We also tried a wonderful cocktail made with Islay’s own Griffith Park Sparkling Wine, with an added dash of elderflower cordial and a slice of cucumber.  All the cocktail recipes are also on the fact sheet.

Fellow guest Lee Moynes, also a food blogger at  Grub “n” Grog had cooked some fantastically tasty food which would make a great alternative to Christmas dinner, or even a festive dinner party. Lee made Parma Ham Wrapped Turkey Escalope with a Spiced Butternut Squash Stuffing and a Tomato and Mushroom Sauce, as well as Apple and Cinnamon Puffs with Vanilla Cream for pudding. Both courses were delicious, the plates were polished clean!

The fact sheet containing all the recipes is available here – it really is worth downloading the fact sheet every week as you usually get at least five free recipes that the guests have brought into talk about.

It was quite a challenge bringing in Polish Christmas food, not least because the Poles begin their Christmas celebrations with a twelve (!) course meal on Christmas Eve, called Wigilia, or the Vigil meal. Obviously, we didn’t have time for twelve courses of food, but I was able to talk about some of the symbolic elements of the meal, for example, how the twelve courses represent the twelve apostles. Also, when setting the table, we set an extra place for the unknown guest and traditionally we would lay hay or straw under the tablecloth to remember the manger.  The meal begins when the first star appears in the sky and we start the meal by sharing oplatki, Christmas wafers, which would have been blessed by the priest. We then go on to enjoy a warming bowl of barszcz, a beetroot broth with uszka, mushroom filled ravioli. In some houses, there might be an alternative, such as the wild mushroom soup that I took in. Although the meal on Christmas Eve is meatless, fish features heavily, usually pickled or creamed herrings and fried carp. The meal also includes pierogi, which are Polish filled dumplings, a little bit like Italian ravioli or an Asian dim-sum, though boiled rather than steamed. On Christmas Eve Poles would traditionally have pierogi with cabbage (sauerkraut) and mushroom, although I took in my favourite kind that my Mama had made with cream cheese and potato, as we’ve always enjoyed them the most on Wigilia. 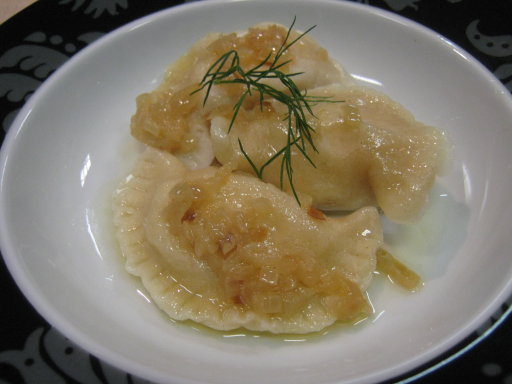 As you can imagine, there usually isn’t a lot of room for dessert, but traditionally a poppy seed cake called Makowiec would be served along with a fruit compote. I decided to put my own twist on things and take in a Sernik, which is a baked cheesecake, as it is one of my favourite Polish desserts and one which I have always wanted to try making myself having eaten it in many Polish households over the years. 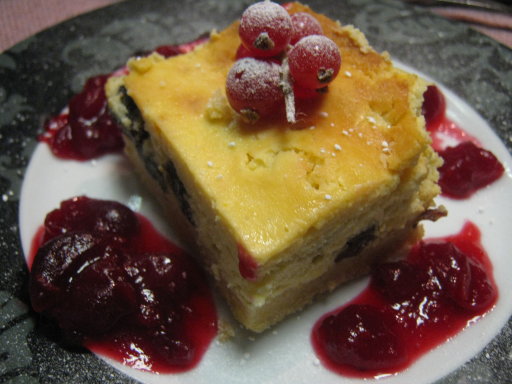 My advice to Nick was to try making the pierogi himself in the New Year, or to befriend a Polish person to make them for him. Luckily, he has just moved into a new house with a Polish neighbour next door so I’m sure he’ll be in for more Polish treats soon!

If you’d like to listen to the whole show, it is available on iplayer for 7 days, the fact sheet should stay up for longer.

In the meantime, here’s the recipe for Pierogi with Cream Cheese and Potato

Pierogi with Cream Cheese and Potato

For the cheese and potato filling:

Thank you very much to Nick and Emma for inviting me back and to Emma for taking the photographs.