There’s very little room left for anything in the kitchen at home, so when I was looking last summer for a new kitchen scale, I knew that bulky, heavy mechanical scales – however iconic – were never going to make the shortlist.

I needed a kitchen scale that I could store with ease, but that was reliable enough to survive being taken out and used pretty much every day. The Salter Slim Design Electronic Kitchen Scale (sometimes sold as the Salter Disc Electronic Kitchen Scale) was cheaper than I had budgeted (update: it was £19.99 last year, but at the time of writing this review is now available for £10 here). It looked smart in the online pictures in black and in white (I chose white), had the features I was looking for in a set of everyday scales, and was advertised with a Salter manufacturer’s fifteen-year guarantee. 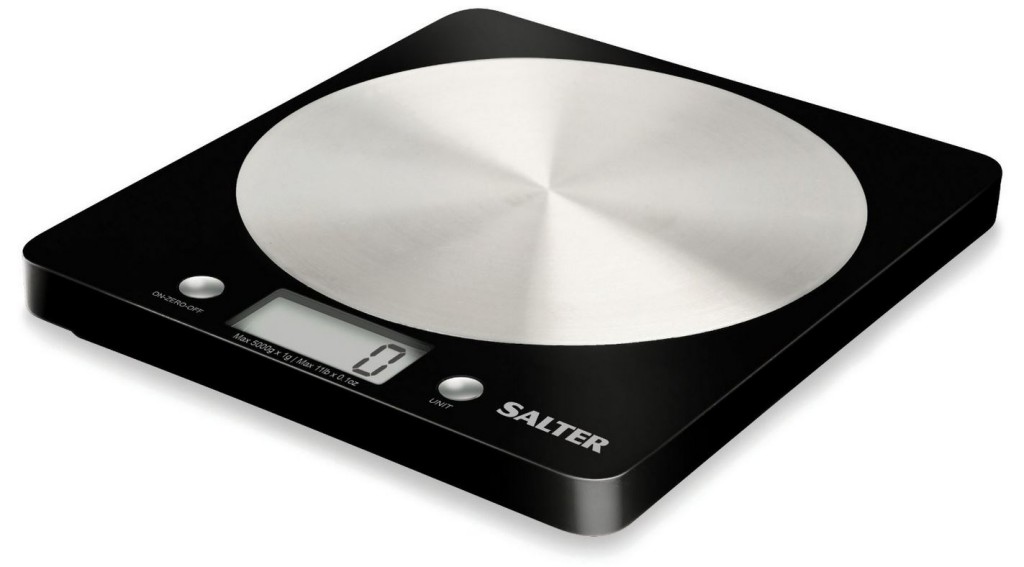 When I took the Salter Slim Design Electronic Kitchen Scale out of its box, I was immediately pleased that at 16cm x 18cm x 2cm it was small enough to be stored in a kitchen cubby hole, but not so fragile and wafer-thin that you worry that it will get damaged by a clumsy hand within the week.

The top of the scale is dominated by a large, wipe-clean stainless steel disc platform for measuring ingredients directly. In front of the disc are two usefully large buttons, located either side of a central, easy-to-read LCD display.

You press the left button to turn the electronic scale on and, when held down, off again.

The right button is used to cycle metric and imperial measurements:

The left button can be pressed at any time when the scale is on and the reading will promptly zero. This is a huge time saver. Rather than having to weigh an empty bowl and mentally note the weight you’ll need to take off the combined ingredients and bowl, Salter simply lets you put the bowl on the scale and press to zero, before adding the ingredient until the required amount is showing on the LCD screen. If you need to add a further ingredient to the same bowl, zero the weight again before adding away. As often as you need. No maths required.

Having used the scale hundreds of times now, I have two tips to pass on that will help you:

– to keep the scale thin, Salter located the LCD screen on the top side. This means that very wide bowls have the potential to cover the LCD. Most of the time you are fine, but it’s something to be aware about.
– the LCD screen displays the current weight in large, easy-to-read digits but the unit measurement is in small text. You’ll sense quickly which is which but until then, don’t forget your glasses if you require them.

I’ve found my Salter scale to be incredibly straightforward to use. It is accurate and the weight displayed always settles quickly. If you are moving away from mechanical scales for the first time you will be amazed at how much time and hassle you save. Highly recommended.

For your chance to win one of two brand new Salter Slim Design Electronic Kitchen Scales (£19.99 RRP) complete with a fifteen-year Salter guarantee, please enter telling me which colour scale you would like, black or white.

Disclosure: Own purchase, I was not asked to write a review, nor offered any incentive. Giveaway sponsored by Ren Behan. Affiliate link included. Giveaway featured on sites including loquax.co.uk and ThePrizeFinder.com