You may remember that a little while ago I attended a bloggers event courtesy of Knorr UK where I had the opportunity of meeting Marco Pierre White to watch him cook. Marco was really lovely and showed us some great tips – which I shared with you all in the ‘Meeting Marco’ post.

Knorr have stayed in touch and have sent me another exclusive seasonal recipe to try called Marco’s Quick Lamb Stew, which I’ll be posting on Fabulicious Food! in the next few days.
In order to try the recipe, Knorr have kindly organised for Forman & Field, an independent online gourmet food producer to put together a lovely box of British ingredients for me which included everything I need to make tonight’s supper (and a bit more!) Forman & Field offer fresh, seasonal, British foods directly to your door. Handy.

Marco’s recipe involves using lots of lovely fresh seasonal vegetables and is suitable for the whole family – so it’s right up my street. 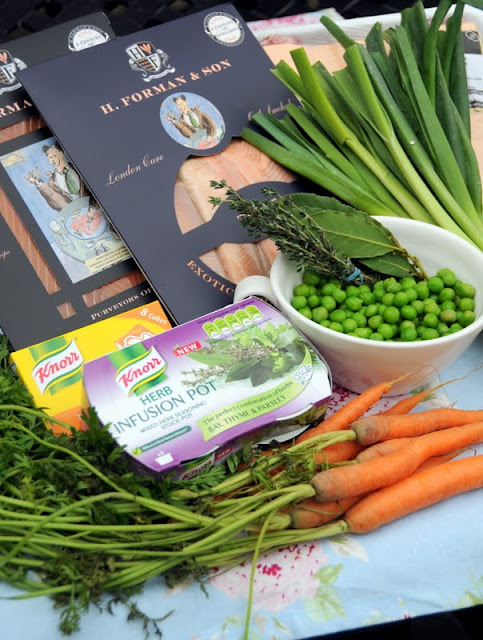 The recipe also involves trying out a new Knorr product called the Knorr Herb Infusion Stock Pot, which is essentially a vegetable stock blended with a selection of herbs, such as bay, thyme and parsely, reduced into a pot that can easily be thrown into soups, stews, risottos and sauces to give a herby taste. The pots are particularly useful if you don’t have fresh herbs to hand and if you do, they will provide an added boost of flavour.
So, whilst I get cooking, I’m also hosting a competition for one lucky reader to win a special prize pack of Knorr products, including the Herb Infusion Stock Pot,  as well as seasonally-inspired veg and some extra gourmet goodies from Forman and Field for themselves.

THE GIVEAWAY IS NOW CLOSED – WINNER TO BE ANNOUNCED.

The winner will be notified on Friday 19th August and announced in a subsequent post on Monday 22nd August 2011 and the box will be sent out on Wednesday 24th August 2011.
Good Luck and look out for the exclusive Knorr recipe by Marco PIerre White in the next few days.