I’m not too sure how I stumbled across Fay’s Family Food.  It was probably a very frustrated search for recipes that would work for the whole family.  With a toddler and a weaned one-year old ready to tuck into proper food I was keen to start cooking food we could all eat.  More than this, I was keen to avoid the slippery slope of spending all day trying to get or keep food down my two children, only to head back into the kitchen to cook adult food once they were asleep.

Enter Fay Ripley, an actress best known for her role in Cold Feet, who happens to have found herself in exactly the same situation as me.

First off, I was pleased to see that there was no gimmicky food, just nice-looking recipes, many of which involved some kind of bung-in-the-oven principle.

Another plus is that at the bottom of most recipes, Fay suggests ways of adapting the recipe for babies, kids and sometimes how to add a bit of kick for the adults.  For example, for the Mini Tuna Burgers she says:

You: Yours can be served without the bun on a fresh green salad dressed with lemon and oil, if you prefer. Try adding a teaspoon of wasabi paste to your mayo!

Simple enough suggestions, but always handy to have good ideas pointed out to you rather than resorting to the default-option of reaching for a jar or getting stuck into a fussy-eater rut of fish fingers and chips or ham sandwiches.

We began with trying Chicken Souvlaki with Peach Salsa.  This is a really yummy but simple kebab-type recipe which involved leaving the chicken to marinate in olive oil, sweet smoked paprika and fresh thyme leaves.  Once cooked the chicken came out golden, succulent and tasty.  My kids found the peach salsa quite fun since they wouldn’t normally eat fruit with their chicken (double bonus).  As Fay says, “It’s on a stick, so the kids will automatically love it.”  We agreed!

Since the cold and blustery nights have set in, I have also tried a couple of winter warmers.  The One-Pot Chicken with Lemon and Thyme Rice has become a real family favourite (see below) as has the Orange and Ginger Casserole which works particularly well in my pressure cooker (once you get over the scary sounds-like-its-about-to-blow-up noise!) 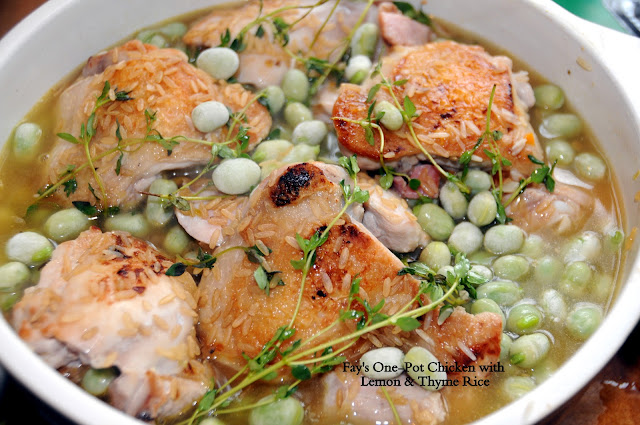 My favourite recipe in this book has to be the Baked Spaghetti Carbonara.  It deviates from a classic carbonara in that it introduces asparagus to lovely pancetta.   Although I used lean bacon instead of pancetta since I felt compelled to compensate somehow for the carton of single cream.  It is also baked in the oven with fresh breadcrumbs on top, giving it added texture.  I actually made this in a tiny kitchen caravan in Wales when we had visitors to stay and it was a real winner for the adults and the kids alike.

For Friday nights (peak take away delivery night in our house) there is also a gratifying recipe for a Chinese take out; Sticky Ginger Chicken and Chinese Roast Brocolli.  I found it so quick and tasty that I could almost have deleted that speed dial to The Lucky Wok.  Much less salt in involved and no grease on the plates.  There is also a Tandoori takeaway recipe if Indian floats your boat.

The book is divided into uncomplicated sections, such as Breakfast (I am converted to Parker’s chese on toast which adds pesto) No Meat, Don’t Panic and Don’t Panic Puddings.  My favourite section is called ‘It’s my party party and I’ll eat sugar if I want to’ – probably because I have an insatiable sweet tooth.  In it I found a sticky yet light chocolate and pear upside-down cake, a simple but deeply satisfying chocolate torte, great standy-by creamy lemon pots and a charming ‘Good afternoon’ apple cake all of which really hit the spot nicely, thank you.  I made the apple cake with Bramleys from my garden which made a delightful afternoon treat.

For any aspiring Dad cooks, I would suggest Dan’s bung-it-in-the-oven Bolognese or Bob’s Bay Bird both of which are straight-forward but impressive dishes that children will love.

All in all, Fay’s Family Food did not disappoint me.  It has made me cook food that we can all eat and many of the recipes are super-quick to prepare which is an added bonus.  I really liked Fay’s down-to-earth style and surprisingly, all the recipes I have tried turn out looking exactly as they do in the photos!

My Daddy Cooks – Easy, family cooking with or without kids!

Prepped! – Great for people who like to batch cook/multi cook for the whole family