Hot off the press, the latest cookbook to hit my shelf is Nick Coffer’s ‘My Daddy Cooks’. Things are very exciting in the world of cookery books at the moment as more and more non-TV/non-celebrity cooks and food writers are making themselves heard. This is partly due to the growing popularity and phenomenon of Internet blogging, which is literally thrusting ‘up and coming’ foodies straight into the hands of publishers who seem to be keen on bringing the very best of such ‘new voices’ forward. It seems there is room for new talent and I believe there should be. Whilst they may not soar quite as quickly as books written by or endorsed by the ‘big guns’ of the food world overnight, I say, look out -there is some real talent emerging.

Enter Nick and Archie. I first met Nick when I was asked to appear as a guest on his BBC radio show (I have the very lovely English Mum to thank for our introduction.)  Nick was in the process of writing his first cookery book (though he has always kept the show and his blog/book quite separate). It was clear to me that his love of food was all-encompassing and that his enthusiasm would propel him forward at great speed.

Nick had drawn a great deal of attention by way of his My Daddy Cooks Video Blog, filmed in a small kitchen in Watford with his one-year old son, Archie, as his helper. Having watched his drinks business fold under the strain of the recession in 2009, Nick had found himself a stay-at-home dad. As anyone who spends the majority of their day at home with a child may know, oddly, there is a lot of time to fill – so they filled it by cooking together in their kitchen. Within a matter of weeks of their first ‘video-blog’ hitting the Internet, Nick and Archie had gained a huge following. They found themselves on the front page on the London Evening Standard, signed a cook book deal and Nick was given the chance to host his own food and drink based radio show through the BBC. And so now to the book… 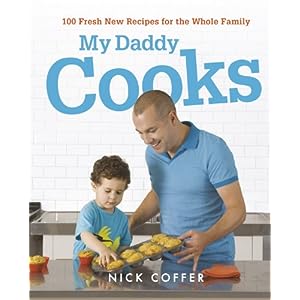 I won’t call this a ‘review’ since it is obviously quite difficult to be impartial when you know the person who wrote the book. What I will say is that this is a ‘cookbook I like’ and the best way, I think, of working out whether a book is any good or not is to cook from it (you’d be surprised how many people miss out this stage). So, I’ve cooked and I’ve tested and I’ve picked out my favourites. I’ve also entered into something of a ‘tweet-cook’ with a fellow foodie who is also cooking her way through the recipes…and so far, so good!
My Daddy Cooks (the book) is not a children’s cookbook nor is it a book just for dads. It’s a recipe book filled with ideas for family meals, which have been tested by Nick and Archie in their kitchen – meaning that many of the recipes include activities that little people could help you with, under supervision. This is a book offering proper rather than fancy food, which is easy to put together for anyone, whether they have a toddler ‘assistant’ or not.

I am very pleased to report that there are no jacket potatoes that have been made to look like mice, nor are there any individually ramekinned shepherd’s pies, hidden vegetable sauces or gimmicky foods. Phew. I think there are quite enough of those type of books out there already.

There are ideas for breakfast in  the first chapter named Beyond Toast (including Oven-baked french toast and Baked eggs in ham cups) as well as ideas for Lighter Bites, plenty of one-pot dishes (such as Oven-baked risotto, Sausage jambalaya, Quick sesame beef chow mein) along with chapters named My Daddy Cooks the Classics, Foolproof Grills and Bakes, Puds, Sweets and Treats (the Baked cinnamon apples and Muddy flourless chocolate cake are post-it noted). All the ingredients required to cook the recipes are readily-available in the shops and there are no store-bought sauces or artificial ingredients in any of the recipes.

Nick has come up with some very clever short-cuts to make food fun and easy to make (he calls it “giving it the My Daddy Cooks treatment”) and other than a few pots and pans and a set of scales, no fancy equipment is needed. A fair amount of recipes are cooked in the oven, though this is because it is often easier to stick something in an oven out of a toddler’s reach. Some of the recipes can be cooked on the stove, such as the recipes in the chapter called ‘Wok on the Wild Side,’ and there are even recipes for microwavable cakes for those moments when you only have enough time to “ping and ding”.

First up, Nick and Archie’s Mexican Lasagna.  It first came to my attention when I caught Nick and Archie cooking it live on stage at The Real Food Festival a couple of weeks ago. It must have been pretty stressful to cook it in front of a live audience with a toddler who may or may not have co-operated on the day, but Archie was hilarious and it was clear to see that he’s a complete natural when it comes to cooking and that he enjoys it hugely. Archie’s version of the Mexican Lasagne included a load of red wine vinegar and whatever else he could find to throw into his bowl. Nick’s version was a little closer to the recipe in his book, though I think the best thing about all of the recipes is that real parents sometimes do have to improvise in the kitchen. As Nick says in his intro, “All the recipes in this book have been devised to survive even the most catastrophic interventions” which is handy, whether you have a toddler ‘assistant’ or not. 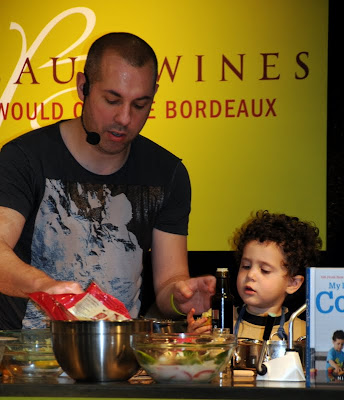 The notion of layering flour tortillas up with chilli shouldn’t work (I’m not a fan of sogginess) but my goodness, it does. The tortillas actually don’t go soggy, they stay remarkably intact and just end up being like chewable pasta – which the kids loved. Keen to re-create the yummy dish I had tasted at The Real Food Festival, I attempted the Mexican Lasagne on the afternoon of a toddler tea party in my garden. I had made the sauce a few hours before just to let the flavours develop and then my kids helped me ‘build’ the lasagna a bit later on. Four ‘under fives’ wolfed it down and asked for more. We re-heated the rest later in the evening and it was still as good, if not better, despite Nick saying in the book that it should be eaten straight away. Just to check it really was as good as I thought it was, I  made it for the second time this week, re-naming it ‘The Mex’. I also tweeted Nick to ask him to dedicate a Facebook page entirely to this one recipe. Enough said about this one (my photos below). 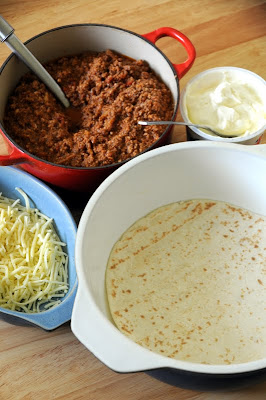 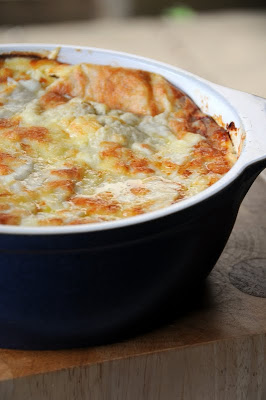 Next I was drawn to the Sticky baked salmon with sesame noodles (it looks so good in the photo in the book) and with a quick substitution of asparagus for the red peppers owning to my silly allergy, I re-created the dish with no hassle at all and it was super-tasty. 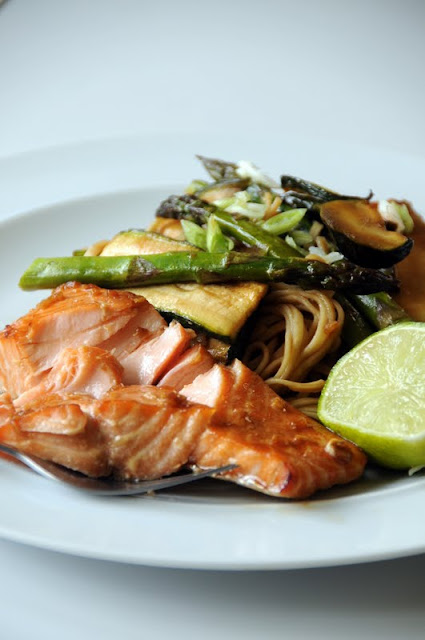 Intrigued by two recipes for microwaveable cakes, I tossed a coin and went for the Microwave chocolate steamed pudding (with its own chocolate sauce) over the Microwave lemon treacle pudding (though that will be next). It took a matter of minutes to put together, there are no eggs in the recipes though somehow, in just seven minutes I had a perfectly cooked, soft, squidgy, chocolaty pudding ready to serve. As my fellow tweeter Laura also said of the recipe, this is a dangerous one to have in your repertoire on the basis that chocolate cake fixes, reminiscent of comforting childhood or school puds, really shouldn’t be so easy to come by. 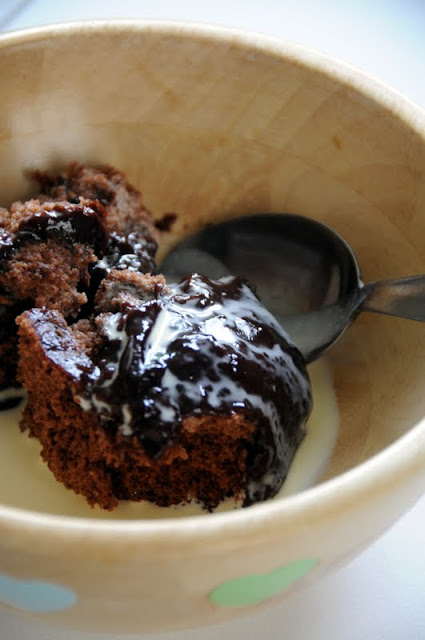 Next on my list of recipes to try will be: the second aforementioned microwave cake, the Muddy flourless chocolate cake, Miso-glazed grilled fish (on the table in less than 30 minutes) Baked penne with courgette and home-made Italian sausage (another front runner in the ‘favourites’ category) Minced lamb and pea curry (I may never have to call for a takeaway again) and Turbo-quick shepherd’s pie (I like the name and it’s nice to see a twist on the classics with sliced potatoes cutting down the preparation time). All the recipes we’ve tried so far have gone down a treat! 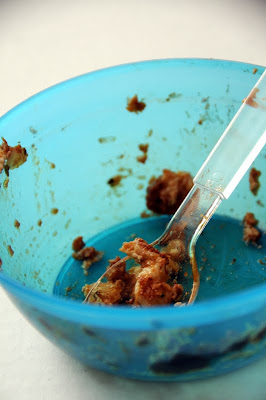 As well as fun family mealtimes, I think you would even be able to turn to this cookbook to entertain friends. For a vegetarian dish I’d go for the Thai vegetable green curry or the Baked aubergines (Iman Bayaldi – a dish I love but have never tried to make myself before), Crispy Duck Pancakes (we could all now be just one hour in the oven away from re-creating this Chinese classic whenever we fancy) and for pasta in a matter of minutes, I would go for the No-cook lemon, cream cheese and smoked salmon sauce.
Not even the publishers could keep this one back, up against some of the most well known names in the cookery world it is holding its own already in the Top Ten of Amazon’s ‘Hot New Releases’ and I hear that Amazon have even been sending out copies ahead of its official publication date. At £8.83 on Amazon

(the RRP in shops is £16.99) I think its a bargain and well worth the spend – not least for the fact that there are some great ideas in here (with a good proportion of photos) AND the recipes actually work as my own photos hopefully show (I own many books where they don’t!) If you’d like a little taster of Nick and Archie’s recipes you could always check out their Video Blog, or look out for their feature in The Times this coming Saturday.
Good luck to Nick and Archie on their continuing culinary adventure!