“Eat Food. Not too much. Mostly Plants”

This is not a new book, published in 2008, but nevertheless it is a good one.  I usually read it in January, to help me a long a bit with my healthy start to the year.  It reminds me of things that I already know, but often forget.  It makes me want to eat healthier food.  And that, can only be a good thing!

Michael Pollan, an American writer, opens his book with a few short words of advice: “Eat food. Not too much. Mostly Plants.” Sounds simple, and according to his beliefs, it really is.  These seven words, are in his view, more or less, “the short answer to the supposedly incredibly complicated and confusing question of what we humans should eat in order to be maximally healthy.”

As well as being crammed with facts and information, In Defence of Food offers the reader an Eater’s Manifesto as well as balanced dietary lessons to help us re-gain a simple but enjoyable relationship with food.  Packaged food is out, real food is in.  Pollan warns that our industrialised, modern, Western diet is literally killing us.

We are faced with an epidemic of chronic diseases – obesity, diabetes, heart disease and several types of cancer – and as cultural and traditional eating habits fade, the modern, processed diet is taking hold.

Far from banning food, such as meat, Pollan tells us to eat, but not too much.  We should also cut out constant snacking, the “fourth daily eating occasion” that we seem to have added to breakfast, lunch and dinner.  We should eat at a table and not alone. We should avoid eating in the car (American gas stations now make more money selling food than gasoline, but we should consider what kind of food this is.)  We should cook and, if we can, plant a garden.  We should pay more for better quality food (as the French do) and eat less of it.

Despite the fact that obesity rates in Europe are rapidly catching up with America, Pollen believes that a traditional diet, whether it is Greek, Italian, French or better still, Asian, is far superior and better for our health.

Pollen says “That food and eating stand in need of a defense might seem counterintuitive at a time when “overnutrition” is emerging as a more serious threat to public health than undernutrition.  But I contend that most of what we’re consuming today is no longer, strictly speaking, food at all, and how we’re consuming it – in the car, in front of the TV, and, increasingly alone – is not really eating, at least not in the sense that civilization has long understood the term.”

Simple lessons, for a better way of life.  Food for thought. I read, and re-read In Defense of Food.  It is certainly a book that convinces you to start thinking and can help us kick into touch those difficult-to-break habits.

Which books do you enjoy reading to help you kick-start new habits?  Leave a comment in the box to let me know. 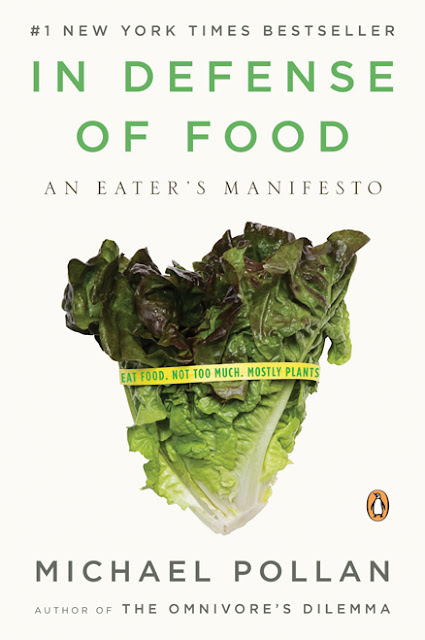