This month, I have been determined to take part in Dom’s ‘Random Recipes’ challenge over at Belleau Kitchen. Dom’s recipe challenge has been running for over a year now and as each month passes by, I find myself drooling over the round-up posts, wondering why I hadn’t taken part.  The rules are that you must select a book randomly and cook a recipe from it. This is great, as it encourages people to turn to books they might otherwise overlook and neglect. The book I randomly selected (from an ever-growing pile now overtaking the whole house) was Leemei Tan’s Lemongrass and Ginger. Leemei is a UK-based food photographer, who also writes a successful blog called My Cooking Hut. Leemei has recently had her first cookery book published to the theme of ‘Vibrant Asian Recipes’ and vibrant they are, too.  It is worth looking out for, it is a very impressive first book, with recipes from Japan and Korea, China, Indonesia, Thailand, Malaysia, Cambodia and Vietnam and India and Sri Lanka.

This month, Dom wanted us to focus on the first or last recipe in the randomly selected book, as very often, we skip through to the middle sections (or in my case usually straight to the sweet recipes at the back) missing some potential gems in between. In Leemei’s book, the back contains a number of basic recipes, including pastes, stocks, sauces and advice on how to cook rice and noodles. The last full recipe is Sri Lankan Crispy Pancakes and I happened to have almost none of the ingredients to hand (yeast, coconut milk, rice flour etc) so I flipped to the front feeling a little more hopeful.

The very first recipe in Leemei’s book falls into a chapter named ‘Japan and Korea’ and it is a Chicken Teriyaki and Onigiri Bento. Onigiri are shaped rice balls, the word itself meaning “taking hold of something with your hands.” A bento is a single-portion home-packed meal, very common in Japan. Since I’ve never made or eaten a bento, I decided to give it a go.

Described as “healthy and convenient” by Leemei, a bento usually contains meat or fish, rice and vegetables, but there are many variations. Leemei uses de-boned chicken legs, short-grain rice, baby leaf spinach and cherry tomatoes. I had chicken thighs, sushi rice, asparagus, broccoli and baby sweetcorn, so that’s what I cooked and put in my box!

It was delicious and also happens to be a really good way of using up left-overs. I had never thought of making cold rice balls to add to a lunch box and the chicken and vegetables were as good cold, as they were warm, too.

I found a guest post written by Leemei on a site called Rasa Malaysia for her Teriyaki Chicken. In her book, Leemai uses Shoyu, which is a type of soy sauce. I used Tamari (wheat-free) sauce in place. Leemei also suggests adding a finely grated, 1cm piece of root ginger to the marinade. Once you’ve thrown together the teriyaki marinade, you can use it to marinate salmon, pork or even beef before cooking it, adding whatever accompaniments you fancy to your bento lunch box. The onigiri balls are made by taking some warm, boiled rice, wetting your hands and then shaping the rice into a ball before sprinkling with toasted sesame seeds.

Now that I have tried one recipe and found it to be very simple and tasty, I am encouraged to dive in and try and few more. I would love to try making some Japanese Pork Dumplings, I was shown how to make them once by my mum’s lodger so now I have a nice recipe to try. There are also some wonderfully fragrant curries, as well as some tempting Thai dishes. There are only a few dessert recipes in the book, but the Sweet Peanut and Seasame Balls look delicious, too.

Thank you to Dom for hosting the Random Recipes challenge. Hopefully, my first attempt and first recipe from Lemongrass and Ginger will pass the test! 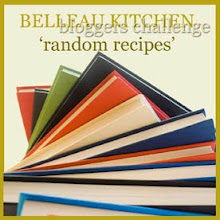 What would you put in your bento box?!