My visit to Pizza East Portobello was quite memorable for two reasons. Firstly, it was the first place in which I ate burrata, a fresh Italian cheese made from mozarella and cream made in a tiny village in Puglia. The Independent described it as “Britain’s new big cheese. Ultra-soft, creamy burrata is replacing mozzarella as the grande formaggio on all the best menus.” If you try it once, you’ll know why. It was the best food discovery for me in 2011 and I can’t wait to try it again, particularly during asparagus season as it is said to be the perfect match. I’ve since only eaten it once more locally, with a ripe tomato and basil salad, at a restaurant called The Akeman in Tring. My mission this year is to find more of it!

The stunning interior of Pizza East Portobello was designed by Martin Brudnizki, who also designs many of the Jamie’s Italian chains. Since Jamie is opening one in St Albans very soon, I am as hopeful about the decor as I am about the potential arrival of the burrata.

The second reason this trip was memorable was that I happened to be sitting next to American chef Anthony Bourdain whilst at Pizza East. If dining there is good enough for him… 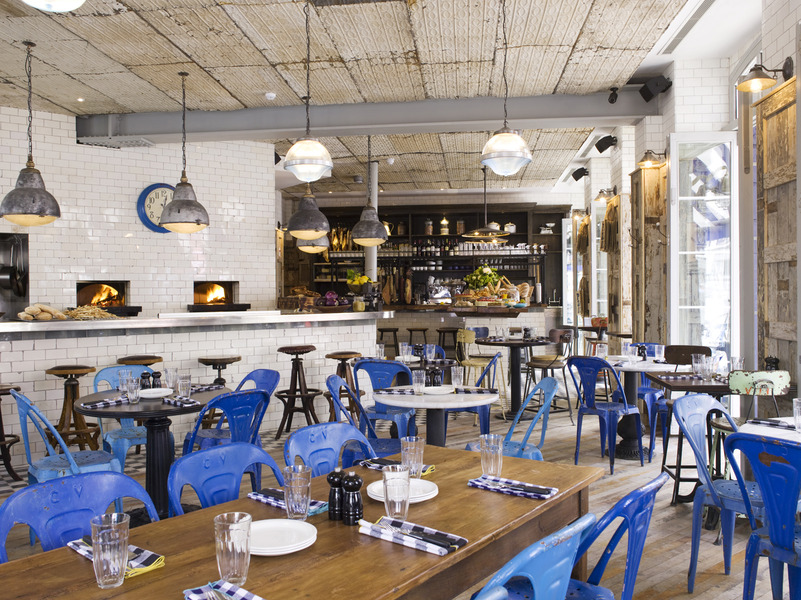 Pizza East Portobello is the latest Soho House Group restaurant to hit West London and, yet again, is bang on the money. As the group has proved already with its East London counterpart, affordable food made with good quality ingredients offered in fashionable surroundings is a winning combination.

A bold blue and white striped balcony now beckons visitors from its corner location on Portobello and Golborne Road, once occupied by The Fat Badger. Pizza East Portobello captures the modest charm of a traditional Italian American pizzeria, whilst offering the trendy crowd of Portobello some eye-candy in the way of reclaimed mismatched café chairs and distressed wooden and marble tables.

A beautiful dark wooden ‘deli’ bar is adorned with vintage weighing scales, salami hanging on hooks and a gelato counter to the side.

Tall windows across two floors of seating allow the light to flood in from every angle, particularly at breakfast-time, as the day is started with house-made sourdough bread, duck-eggs and good strong Italian coffee. By lunchtime the ‘All Day’ menu kicks in and doesn’t really stop until late in the evening. Throughout the day, deli produce, in the form of cured meats and cheeses, is available to take away.

White tiled walls and an exposed white metal ceiling ensure that even at night, as pretty tea lights sit in empty conserve jars and the warmth of the open wood-fired pizza oven glows, the packed atmosphere is cosy yet unconfined. On the tables, red wine is served in tumblers and rustic chunky cutlery sits on chequered napkins, which match the striking black-and-white chequered marble floor.

There is a very quick turnaround at the deli bar and open pizza counter as locals stop in to take a pew and share antipasti. The Bone Marrow Bruschetta (£5) and Chargrilled Squid with Salsa Verde (£6) are big hits, as are wooden counter boards with deli produce (choose any 3 for £12). Peroni is on constant tap, served in tall, chilled glasses. The wine list (almost exclusively Italian) offers a fantastic regional selection.

Whatever takes your fancy on the menu, make sure it includes burrata – a fresh, creamy mozzarella cheese sourced from a village in Puglia barely able to keep up with demand. By the end of a busy week it may not even be available. Pizzas (between £7 and £11) are hand-stretched and slow- proved; the Burrata, Tomatoes, Olives and Thyme Pizza is the number one choice though other wood oven specialities, such as the Crispy Pork Belly (£13) also compete for attention. Salads and sides follow the seasons and change almost monthly. If you have room, the Salted Caramel and Chocolate Tart (£4) already has something of a cult following.

Pizza East Portobello is proving to be very popular from the outset, carrying the Soho House Group badge of quality as well as offering its own unique edginess. Attention to design detail and good service prompt the feeling that Pizza East Portobello has always existed. Pizza East do not offer a reservation system, but the quick turnaround at the deli bar and two floors of seating mean that you should have no problem being served. 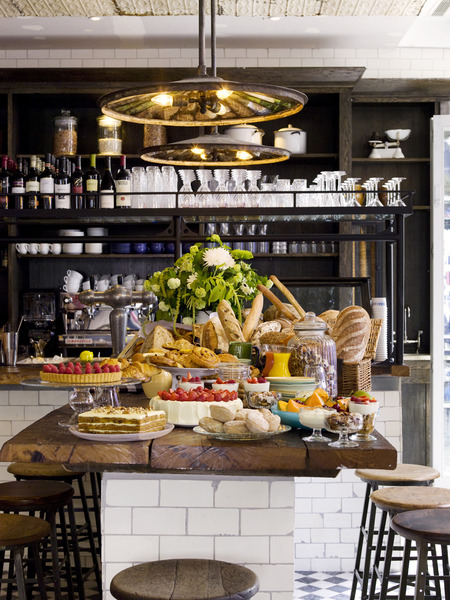