Yesterday, I wrote about Day One of the Martell Pure Gourmet adventure, in Cognac, France. Our bright and breezy second morning began with a visit to a traditional French market, in the nearby town of Saintes. 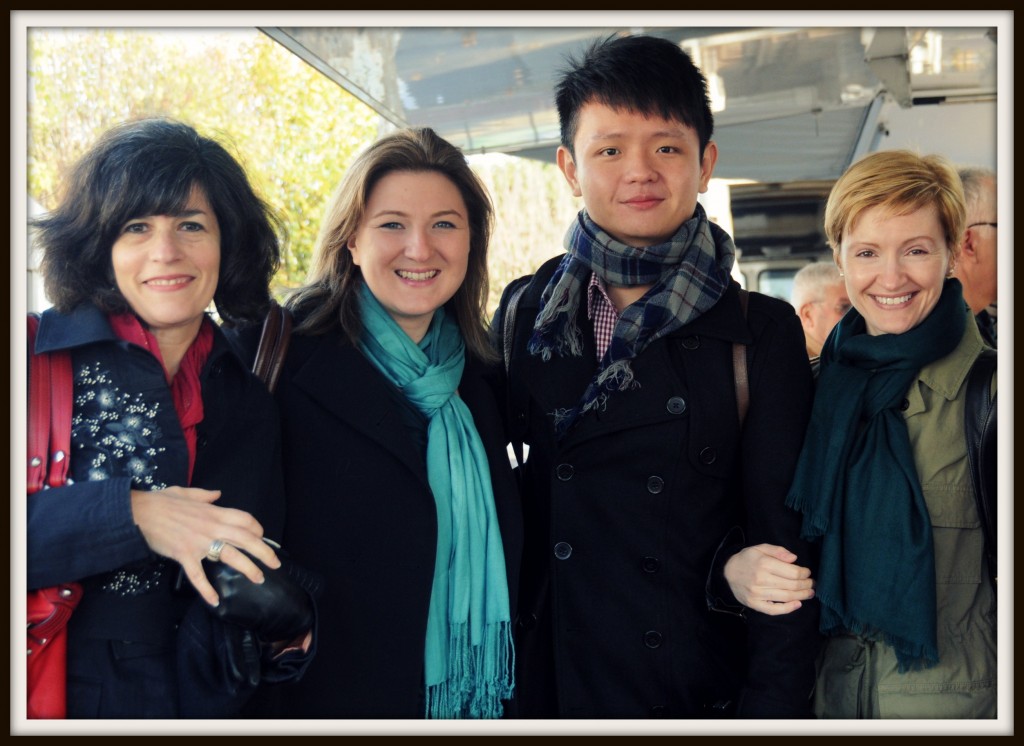 Jamie, myself, Brad and Helene at Saintes

The trip was really to enable us to appreciate just how rich and diverse the local produce is and by all accounts, this was a small market compared to other days. Even before we reached the main part of the market, we could see the lady at her magazine stall selling a few cèpes that she’d probably found on her way to the market herself. Oh, how I wish we could find these at my local market! 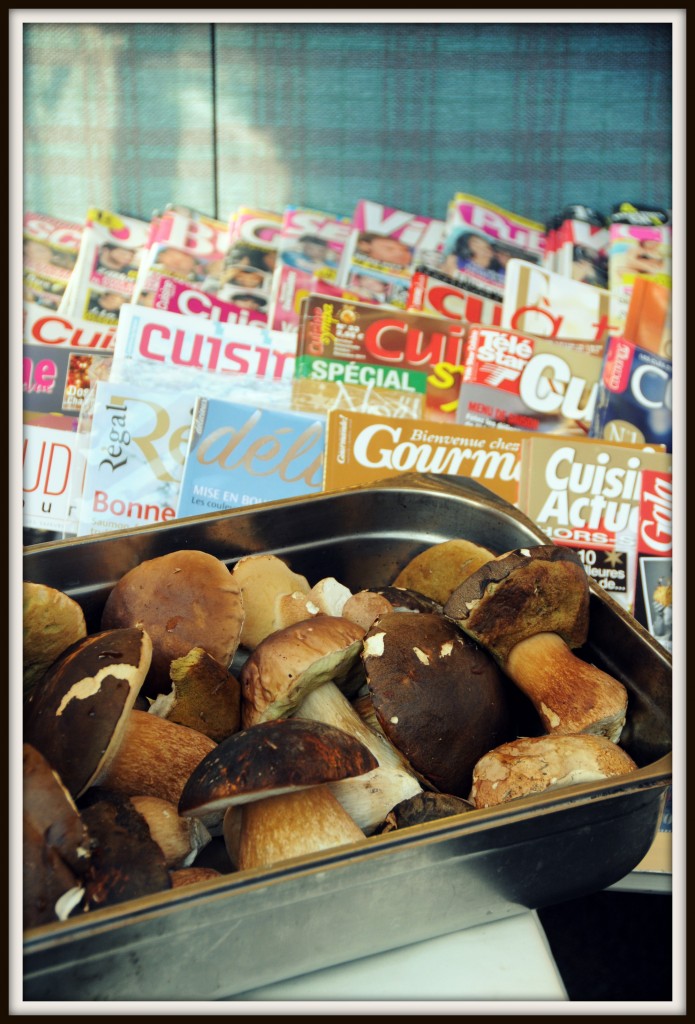 We also stopped at the Fromagerie Moreau, where the market stall owner was pleased to answer any questions we had about the vast array of local cheeses on offer and some from further afield. I did notice that many of them were marked AOC or AOP, the certification granted to certain agricultural products, including wines, cognac, of course, cheese and even butters within designated geographical areas.  The French are particularly proud of provenance, which, for me, was a wonderful thing to see and to appreciate, as we see it more and more in Britain. 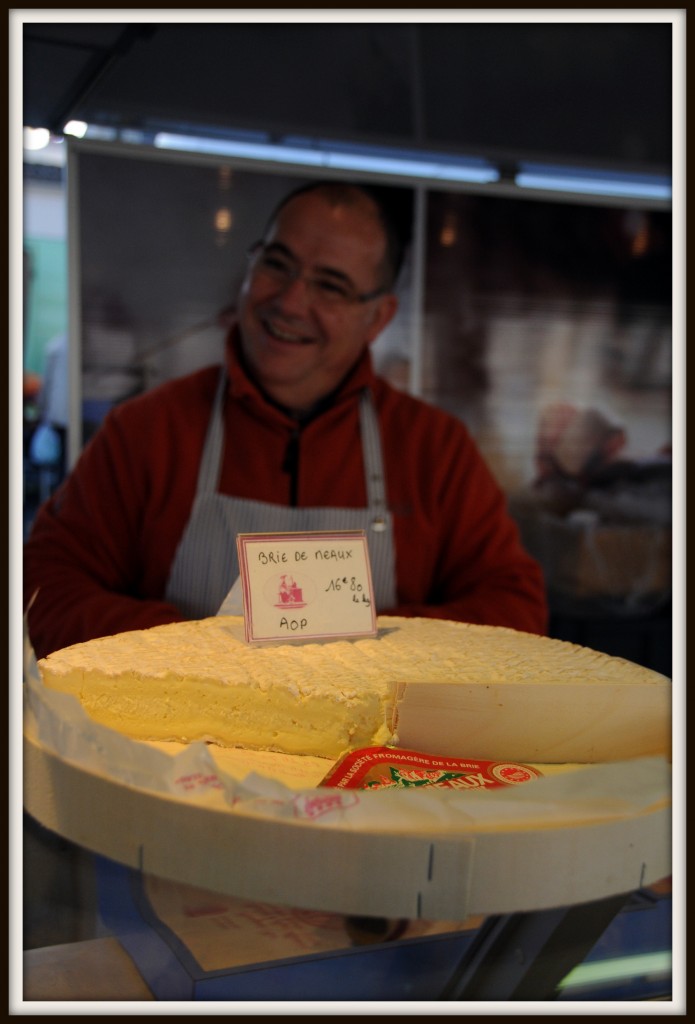 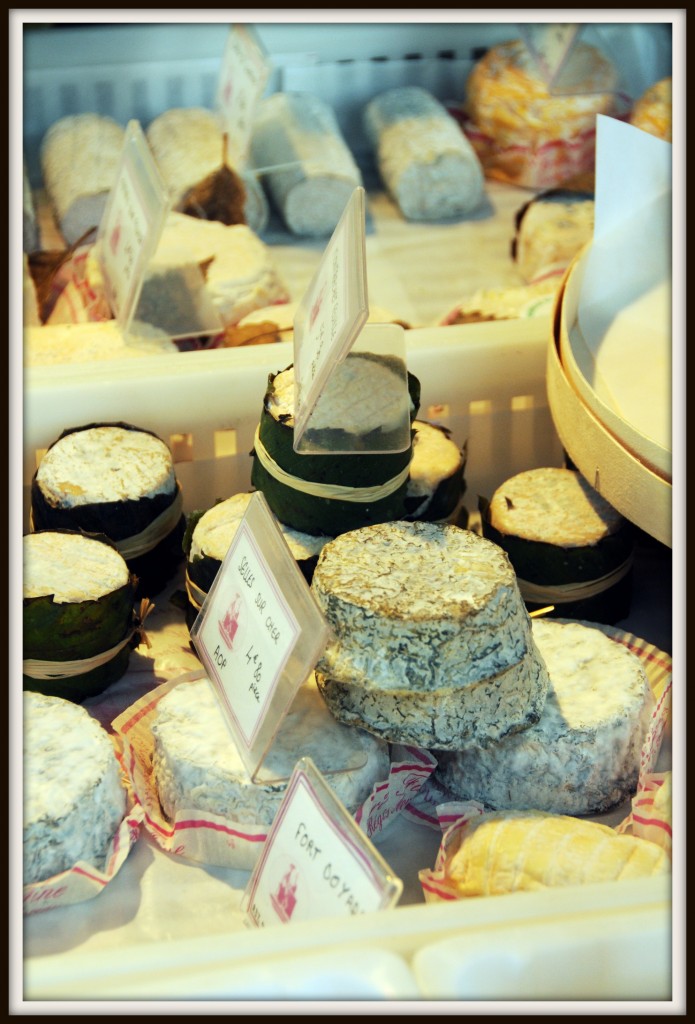 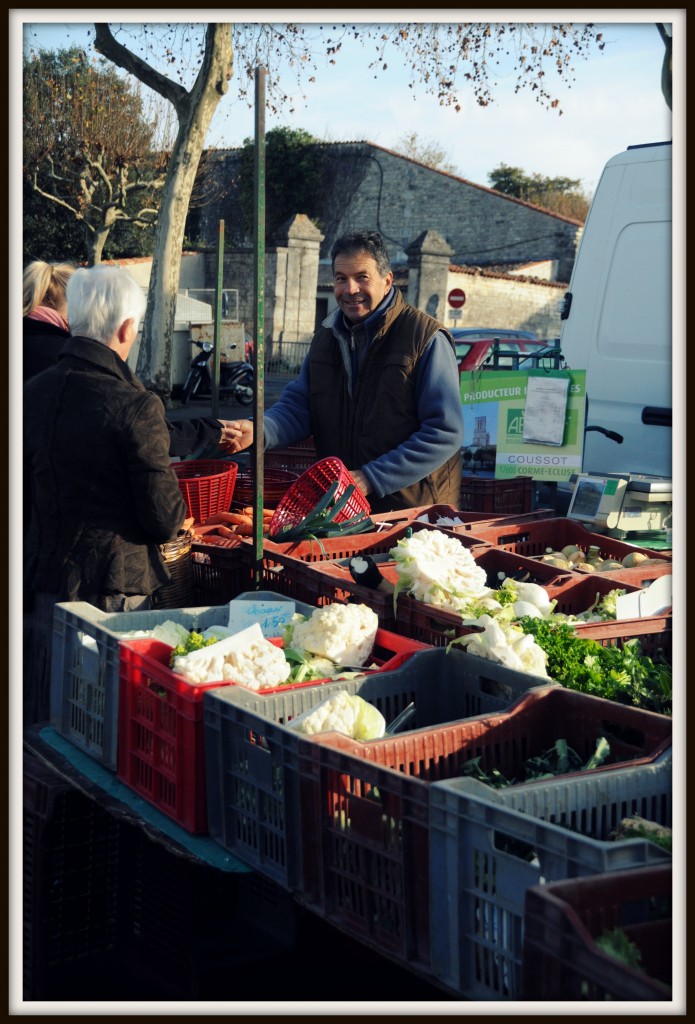 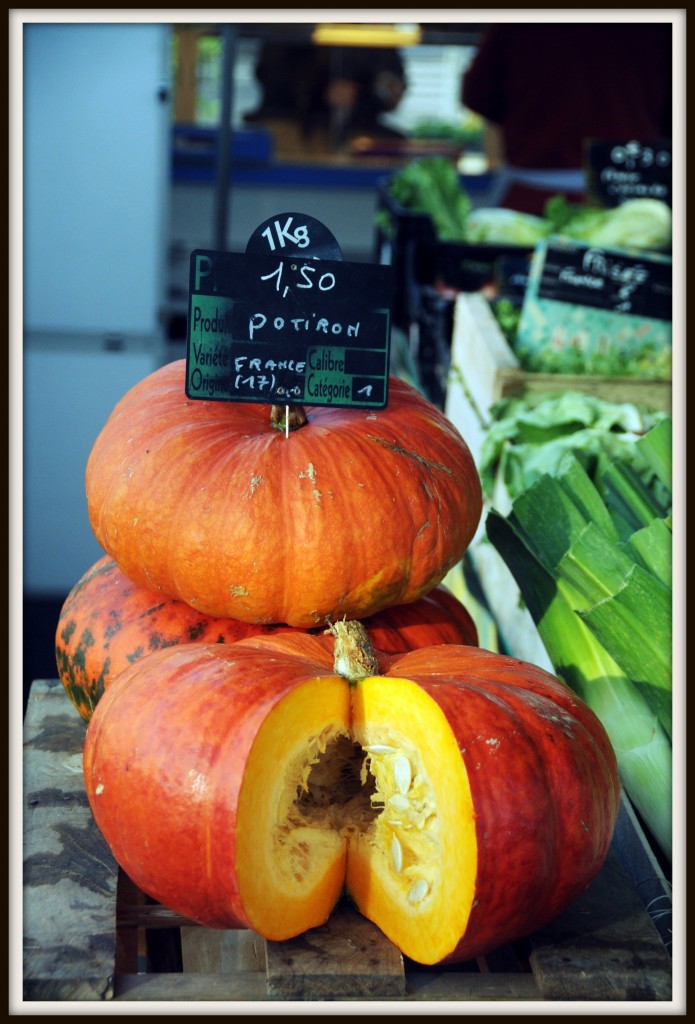 I can also never quite believe how small our world really is. I had ‘tweeted’ my whereabouts and my friend and fellow blogger Karen from Lavender and Lovage exclaimed that Saintes was in fact her local market town. This was so strange as I had only met Karen a couple of weeks earlier when she had popped over to visit me in my local market town whilst on a visit to England. I had mentioned how lovely it would be to one day visit Karen’s part of the world! What are the chances of ending up in a tiny, rural part of South West France and being that close to someone you know? Anyway, I was very grateful that I was able to leave the rest of group for a short time to meet Karen and her husband for a quick French café au lait, whilst the others went to visit another local producer of fruit and vegetables. 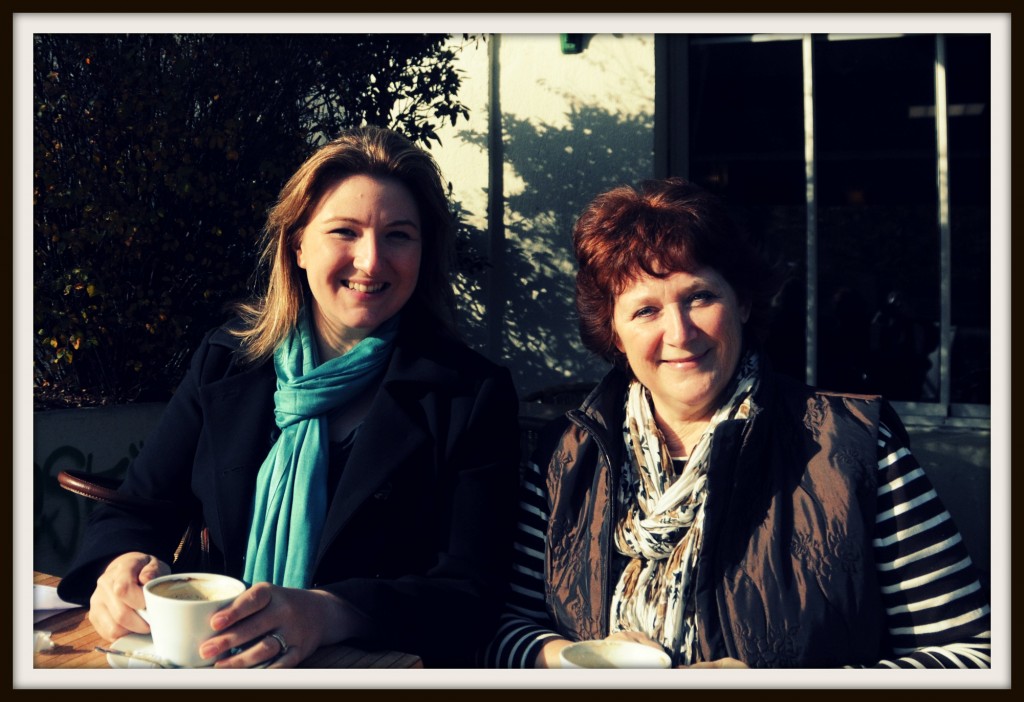 I just about made it back (after a particularly interesting taxi ride where my A-Level French failed me) for a spectacularly fresh seafood lunch at the Château. There really was a remarkable display of local seafood on offer, fresh oysters, which we had seen earlier on at the market, salmon, langoustines, fresh crab, all accompanied with, yes, you guessed it, Martell cognac. Of all the individual pairings so far, I absolutely loved cognac with seafood. If you think about it, a very simple Marie Rose cocktail sauce at home can be elevated to something else with a splash of cognac, so it really would be a beautiful idea to serve a small glass of cognac with any seafood starter over the festive period. 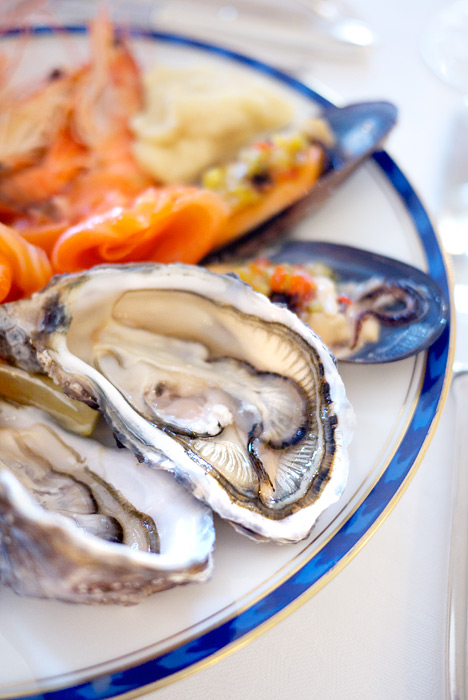 After lunch, we were divided into two smaller groups. We started with a welcome into the kitchens of Château de Chanteloup, where the hard work of the Pure Gourmet adventure really happens. As I mentioned in my earlier post, the House of Martell have a resident team of chefs, led by Eric Danger and Christophe Pienkowski, who work together to create some remarkable dishes and cognac pairings for Martell guests from all over the world. We were shown how to make a dessert of crêpes with lemon, fresh berries and an orange suzette sauce, paired with VSOP cognac. The second team made madeleines with honey which were paired with Martell XO. I’ll be trying the recipes at home and will hopefully be able to share them with you soon. 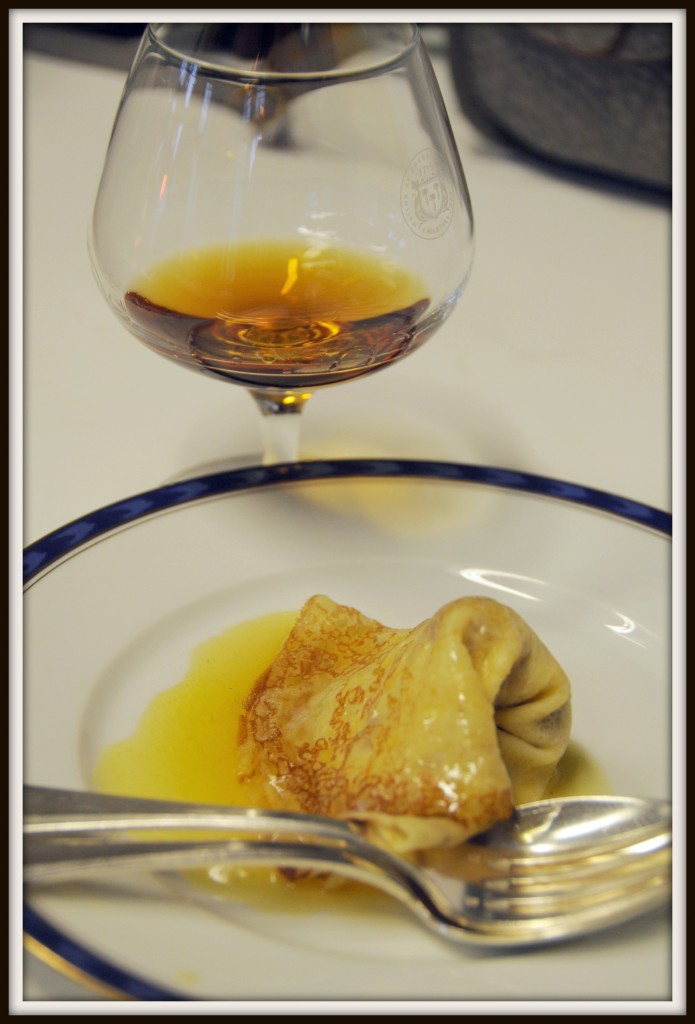 We also went back to the Martell Distillery for a ‘vertical’ tasting session with Jeremy Oakes, or Cognac School, as I preferred to call it. We began with a younger Martell cognac, Noblige, which was created by Martell in reference to the saying “Noblesse Oblige”, referring to the responsibilities carried by the aristocracy.  This was a very special cognac, myself and Jamie both took a bottle home with us, although it is rarely available on mainland Europe. If you do see it, try it, you won’t be disappointed. Next, Martell’s signature Cordon Bleu, which had tried earlier on with the seafood lunch. This is the cognac of choice when it comes to important matters, for example, it was enjoyed at the signing of the Armastice, it was also offered by Air France on Concorde and on the Orient Express as well as being featured in films. There is a light mocha coffee flavour, which is why it matched particularly well with the “grand cru” coffee bean sauce during the Pure Gourmet meal. The third cognac was an XO or Extra Old which was more earthy, with hints of candied peel, hazelnuts and walnuts. It has a superb after-taste and really lingers. This is under the Christmas tree for my husband! We moved onto a second tasting of the very exclusive Chanteloup Perspective that we had tasted the evening before at the Château on the night of its launch in Asia. Next, we tasted the very special Martell Creation Grand and as we did so, we were almost at the very top of the range. This definitely had a stronger fruitiness, with maybe even hints of marmalade or dark berries and spicy notes. Quite frankly, the fact that I remember any of this detail is remarkable! 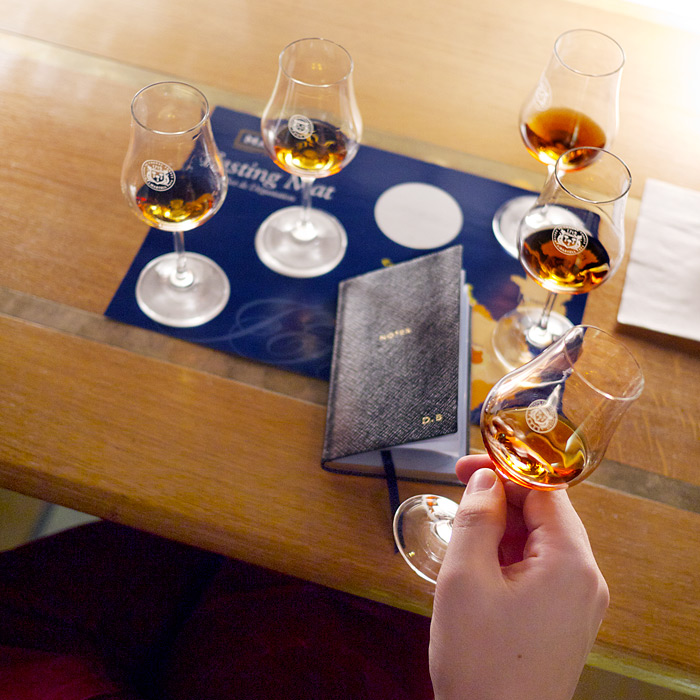 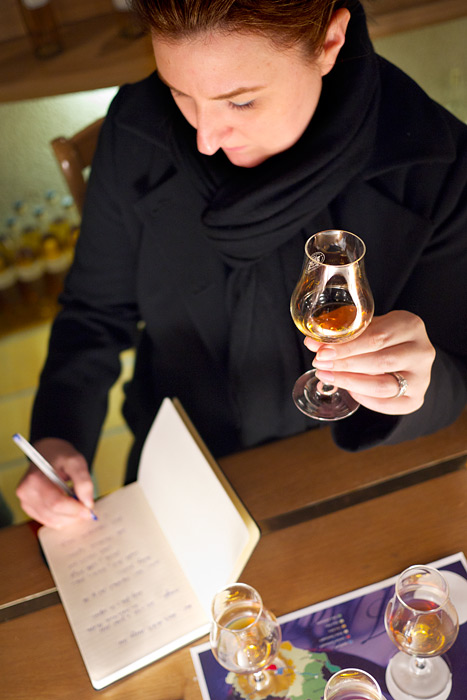 – both photographs by Anne-Laure Jacquart

The really special treat was waiting for us right at the end. We were taken into the Paradise, or Jean Martell’s Cellar to taste L’Or de Jean Martell, which is a blend of several hundred eaux-de-vie, some of which have been hidden in the Martell cellars for over a century.  Martell have some of the oldest stock of cognac in the business, the oldest dating back to 1802. They describe L’Or de Jean Martell as “the culmination of Martell’s 300 year quest for perfection.” So, if you should ever win the lottery, you will know what to buy youself.

After a much needed rest back at the Château, we prepared ourselves for dinner which was a premier of Asian-inspired recipes. Highlights included a Shellfish Stock with a Celery and Royal Crab Ravioli. We discovered that adding a tablespoon of cognac into the soup once served really complimented this dish.  We also had homard, or Lobster with a Mango Vinaigrette and Young Salad Leaves followed by Beef Tenderloin with Exotic Peppers, Eggplant and Tempura. Dessert was the ultimate supreme moment and it was, for me, the very best cognac match of all, a Velouté au Chocolat (Fleur de Cao), with a Yuzu Ganache and Crystallized Oranges. This was a silky, smooth chocolate dessert, with a layer of yuzu. Yuzu being a very aromatic Asian citrus fruit, which as I discovered, goes very well with chocolate and cognac.

We spent the rest of the evening chatting in the lounge (with perhaps a spot of singing) along with a couple of glasses of champagne. How was I still standing?!  To finish off our stay, we were presented with our very own engraved bottle of Chanteloup Perspective as well as a madeleine tin and group photograph. Christmas really had arrived early! 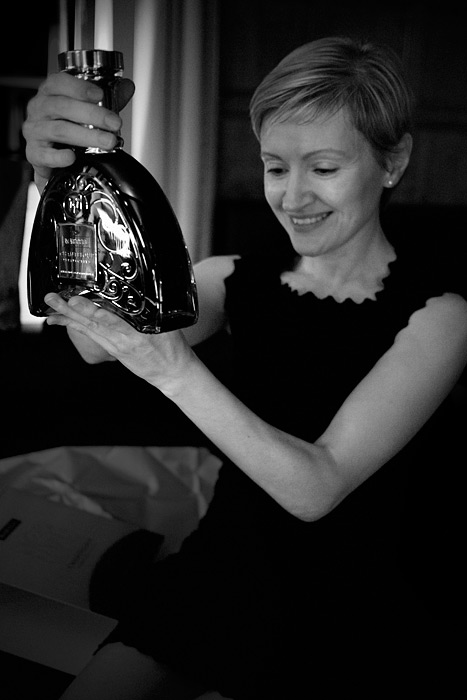 As I sat on the train back to Paris and then onto London very early the next morning, I felt as though I had left my parallel universe and my Château life far behind, but what an adventure it had been. There had been so much to take in and to enjoy, to discover, to learn, to taste.

Part of me is hopeful that Château de Chanteloup will open its doors to more people one day, to enable them to experience this Pure Gourmet adventure for themselves. You can visit the Martell distilleries, as we did, which is really worth a trip in  itself, though a stay at the Château remains by the invitation of Martell.

I very much look forward to continuing to watch Martell interacting with their consumers, the ultimate keepers of their fate, without letting go of the very unique elements of tradition, prestige and luxury that Martell, as the oldest cognac house in the world, so firmly holds. Profile raising within this new age of social media is challenging, but I think that Martell have made an excellent start so far. As we were the first group of bloggers ever to be invited to Château de Chanteloup, it was a great privilege for me, as a British food blogger, to be part of this chapter of Martell’s history.

With thanks to Katja Graisse and the team from Balistik*Art in Paris for the invitation, the House of Martell and the Martell team, including  Tiffany and Bérengère, for their hospitality. Return travel, food and accommodation were covered by Martell, along with a madeleine tin and gift bottle of Chanteloup Perspective as a memento. We were also joined by photographer Anne-Laure Jacquart. Credit is given to Anne-Laure underneath any of her photographs used in this post. All other photography my own. The decision to write about the adventure was my own. 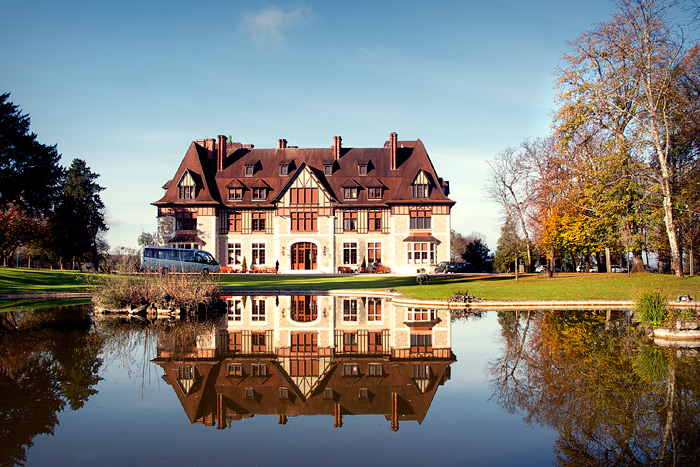 You can find links to many of the Pure Gourmet recipes through Martell’s facebook page too.