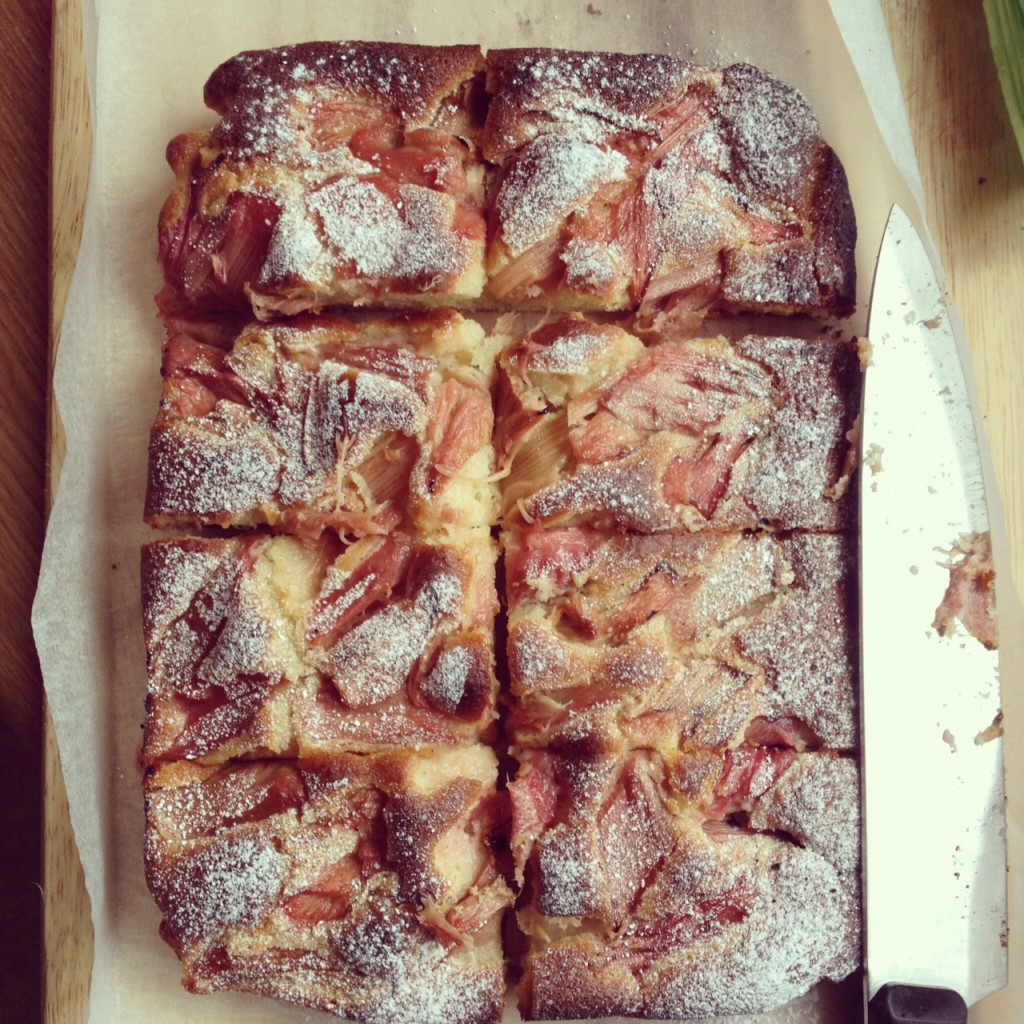 I made this rhubarb traybake in super-quick time and snapped a very quick photo on my iPhone – not thinking a great deal of it since I make it so often. The cake batter is made to a recipe given to me by my mother (on most occasions, over the phone) but this time I’ve made the effort to write it down and share it. It’s the kind of traybake that is so simple to make and can be adapted to use any fruit in season. I often add stewed apples with cinnamon, or ripe pears and you can even use berries or at a push, tinned fruit. Using vegetable oil or very light and mild olive oil and yogurt keeps this cake lovely and moist – it is perfect with a cup of tea!

We are getting to the end of forced rhubarb season now, generally available from January to April. It is grown indoors, in almost total darkness and is harvested by hand in candlelight. The rhubarb is covered and pink shoots begin to appear as the rhubarb tries to grow and find light. It sounds very strange, but the method was developed so that dessert fruit would be available when other seasonal fruits were not available. British rhubarb tends to be grown in West Yorkshire and forced rhubarb tends to be sweet and delicate. From around April onwards, you will more likely be able to find outdoor rhubarb, which is slightly tougher and may need more sweetening. Interestingly, although rhubarb is botanically a vegetable, it is considered to be a fruit because it is most often used in desserts. Rhubarb leaves are toxic, so if your rhubarb is from the garden, wash your rhubarb well and throw away any leaves rather than composting them.

My mum uses a highball tumbler glass to measure when baking rather than scales, which in fact, holds the same weight/volume as American cups. I have converted the recipe into grams, below.

I’m sending this recipe across to Nazima of Working London Mummy who is hosting this month’s One Ingredient Cooking Challenge – Rhubarb. Laura from How to Cook Good Food will be hosting this in May. I’m also linking up to April’s Simple and in Season here on Fabulicious Food! There are still a few days to enter your easy, seasonal recipes. 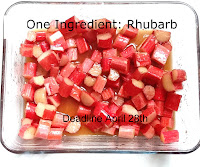 Are you a fan of pretty pink rhubarb? Forced or outdoor?

Don’t forget to enter my current cookbook giveaway (worldwide) to win a copy of Eat London 2!