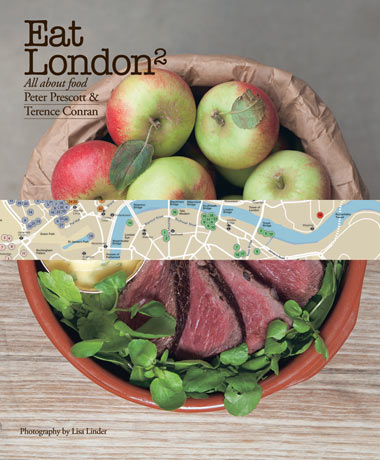 With less than 100 days to go until the 2012 London Olympics and even fewer until the Queen’s Diamond Jubilee celebrations, all eyes will soon be on London.

Food is a huge part of any celebratory occassion and (hopefully) visitors to London will be seeking out the very best places to eat, including cafés, restaurants, bakeries, food markets, as well as artisanal delis and pop-ups. London is fast becoming one of the most important food destinations in the world. We are certainly keeping up with culinary trends and in some cases, doing a very good job of setting them.

Written by Terence Conran (a leading restaurateur) and Peter Prescott, who has worked alongside Terence Conran since 2001 (together owning Prescott & Conran Ltd), the book reads as a guide, though the authors intend it to be “more than a restaurant guide.”

Eat London 2 is really a culinary tour of London, aiming to highlight the very best places to eat.  The 15 chapters are divided into areas of London.  For example, Bayswater/Kensington/Notting Hill is one complete chapter. There are also two pull-out maps covering North London and South London in the front and back jackets, with numbered and colour-coded listings marked on each. So, looking at Battersea, there are 8 places of interest listed, including the very popular Chez Bruce and Trinity restaurants. In other areas, British pubs worth visiting are mentioned, as well as Champagne bars, Farmers’ Markets and specialist produce shops.

There are address listings for each ‘foodie pit-stop’ with added suggestions of things to do alongside eating in the introductions to each chapter. When visiting Shakespeare’s Globe Theatre or The Oxo Tower in Southwark, you could also plan a trip to Borough Market or Neal’s Yard Dairy. Included too, are book shops, such as Books for Cooks in Notting Hill, chocolate shops, such as Melt on Ledbury Road, and bakeries and cake shops, such as Violet owned by Claire Ptak in Hackney, co-author of Leon Baking and Puddings.

For anyone, like myself, who likes to plan their city-breaks or holidays around the best foodie places to stop at this book is a useful resource.

Why not just Google?

This is a complete and almost personalised culinary guide to London. There is a feeling that somehow the ‘tour’ of each area has been well-planned. The recommended places have been hand-picked and the reader is left to decide for him/herself what type of food haunt would suit, or which area to explore.  The cover is quite clever, too!

There are photographs of interiors as well as restaurant dishes and different parts of London examined in varying levels of detail. I also liked the fact that the book is dotted with recommendations from other foodies, such as Yotam Ottolenghi, quoted as saying that his favourite specialist food shop in London is La Fromagerie, or Pierre Koffman who recommends Raoul’s on Clifton Road for breakfast or Sensory Lab on Wigmore Street for the best coffee. There is also a lot less information to sift through than doing an online search of “the best places to eat in London” – in a good way! 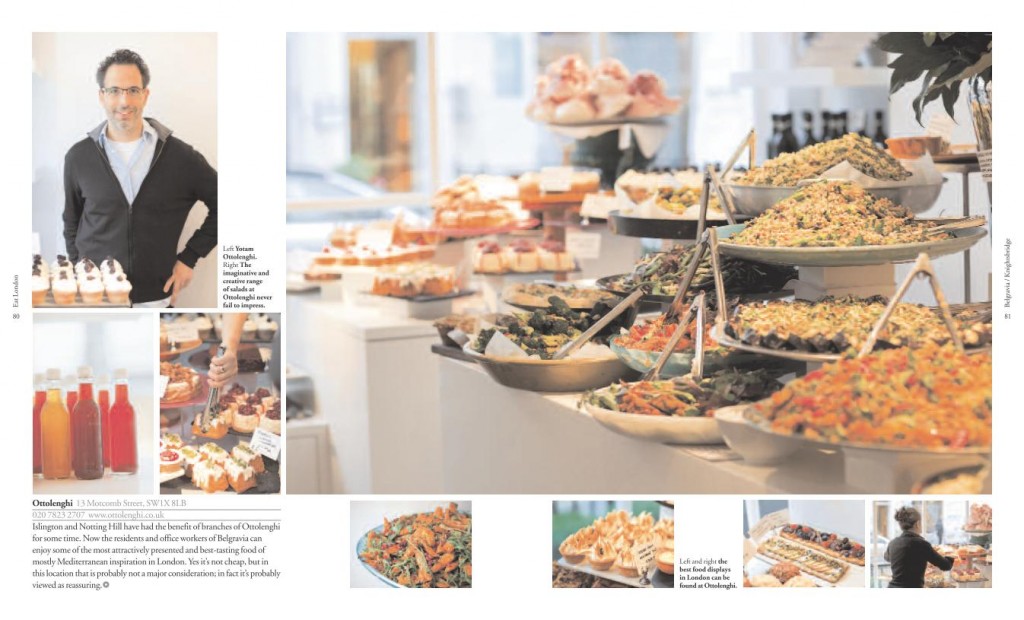 There are also 60 recipes shared within the book, including signature dishes from some of London’s top restaurants, such as Bocca di Lupo and St John, as well as the odd sweet treat, such as Franco Maca’s Cherry Amaretti or Skye Gyngell’s Strawberry Granita, as served at the award-winning Petersham Nurseries Cafe and Teahouse. The instruction alongside this entry is to “Take the day off for this one. Jump on the train at Waterloo Station, and within 20 minutes you’ll be at Richmond Station. Then walk to the arcadia that is Richmond Hill, down the hill towards the meandering Thames and across Petersham Meadows in the full glare of the grazing cattle.” Note to self: I really must make that trip soon!

The recipes are indeed a bonus, though personally, I found them a little difficult to spot and they seem a little crammed in. I think I would have preferred some sort of cross-referenced section at the back dedicated to recipes. If you are interested in re-creating restaurant food at home, then you might find some recipes of interest.

One thing that isn’t really mentioned is price-range, so you are left to find out for yourself whether you are about to spend £10 a head or £100 a head to eat/shop. If you look closely enough, you will find trendy-but reasonably priced places such as Pizza East (Shoreditch and Portobello) and lesser-known but ‘well-worth a de-tour’ non-Michelin places, such as my favourite, Baltic restaurant in Blackfriars, serving an outstanding array of Eastern European food.

Eat London 2 All About Food is published by Octopus Books with an RRP of £20. With thanks for my review copy and the images.

As the research was completed in summer of 2011, there is a disclaimer to say that some of the facts may change by the time you read the book!

I also have a copy of Eat London 2 to giveaway to one lucky foodie. I am trialling a new widget called Rafflecopter which has become very popular for giveaways – please let me know if you have any problems entering. Good luck!