Last weekend saw the opening of a new branch of Jamie’s Italian in St Albans, taking over the space that used to be The Bell Public House on Chequer Street. The Bell becomes Jamie Oliver’s 25th restaurant in the Jamie’s Italian chain and since it’s on my doorstep, I was eager to visit. I joined fellow St Albans food blogger Heidi Roberts for a pre-opening lunch on Saturday, ahead of the official opening on Sunday 5th February. 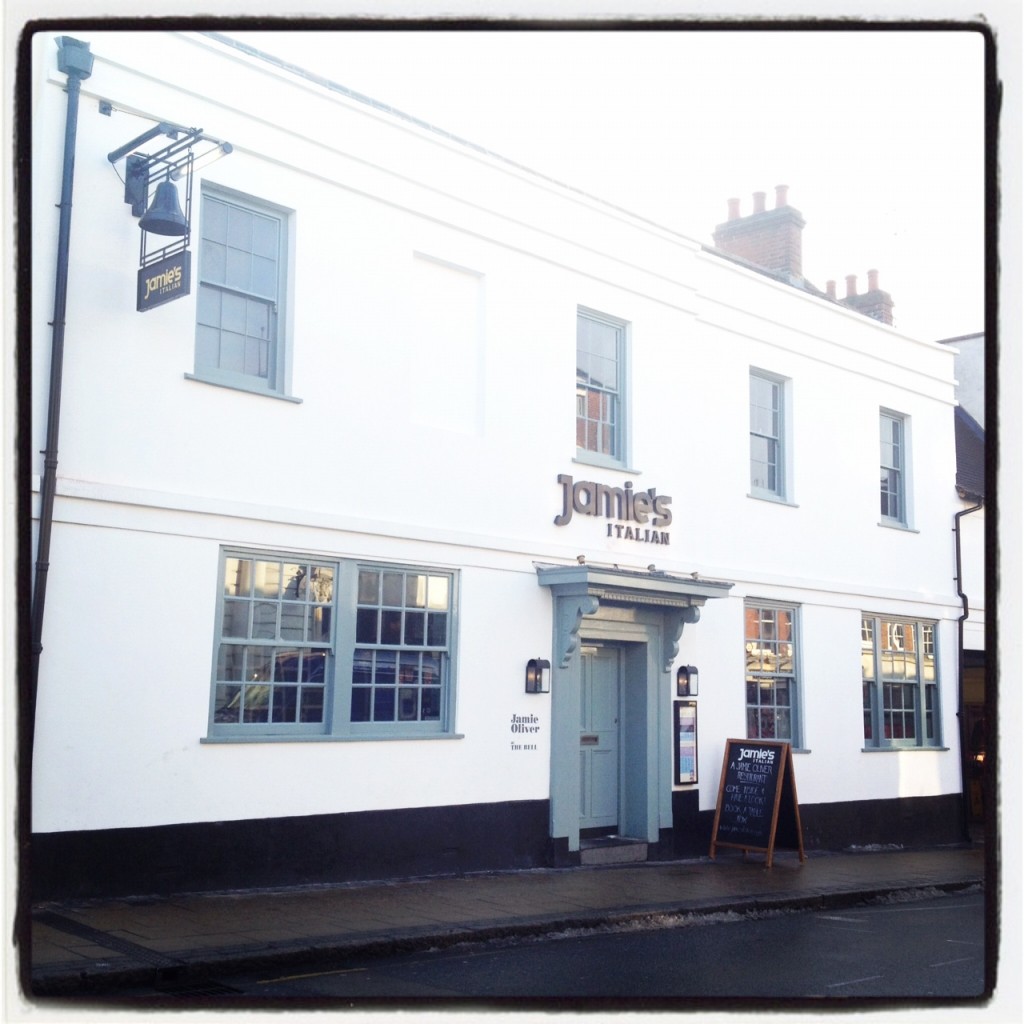 The Bell is a listed building, with a chimney dating back to the 18th century and other areas dating back to the 19th century. Having followed the press reports, it would seem that Jamie has had to work very hard to jump through strict regulatory hoops, whilst sticking to a brief of ‘enhancing the character and appearance’ of the St Albans conservation area. He has succeeded, and The Bell now stands proud again, offering 150-seats to discerning St Albans diners.

My first impressions were that many of the building’s original features have been kept, whilst being given the ever-more familiar ‘Jamie’s Italian’ stamp. As you walk in, on show is a fresh pasta station (all pasta is made in the house) and a long drinks bar to the left, stacked with Italian wines and Jamie’s organic house wine, stored in eco-friendly Tetra Pak cartons – it is later decanted. There is also fresh bread, tins of Italian tomatoes, and of course, the obligatory levels of Jamie merchandise and cookery books to buy. 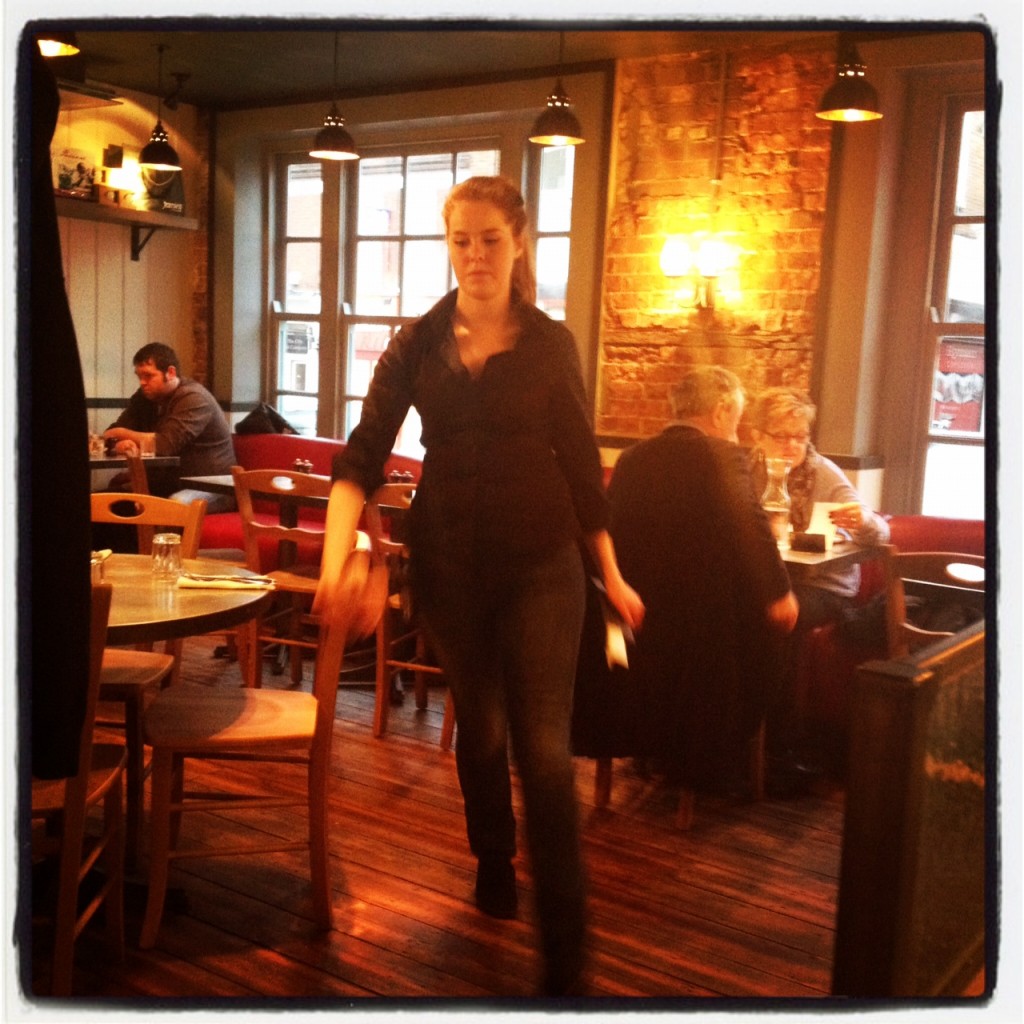 At the front of the building (along Chequer Street) are two separate dining areas, both with exposed brick walls and restored fireplaces, offering a more traditional and cosy atmosphere, a bit more like a pub. The main dining area has a more urban feel, sitting directly underneath a large glass roof through the middle and a timber-vaulted ceiling to the right-hand side, with windows looking out into the ‘premium-retail’ area known as The Maltings. Tables are a mixture of wood with metal chairs, or metal with wooden chairs, with bright red benches around the perimeter and gun-metal, painted walls. 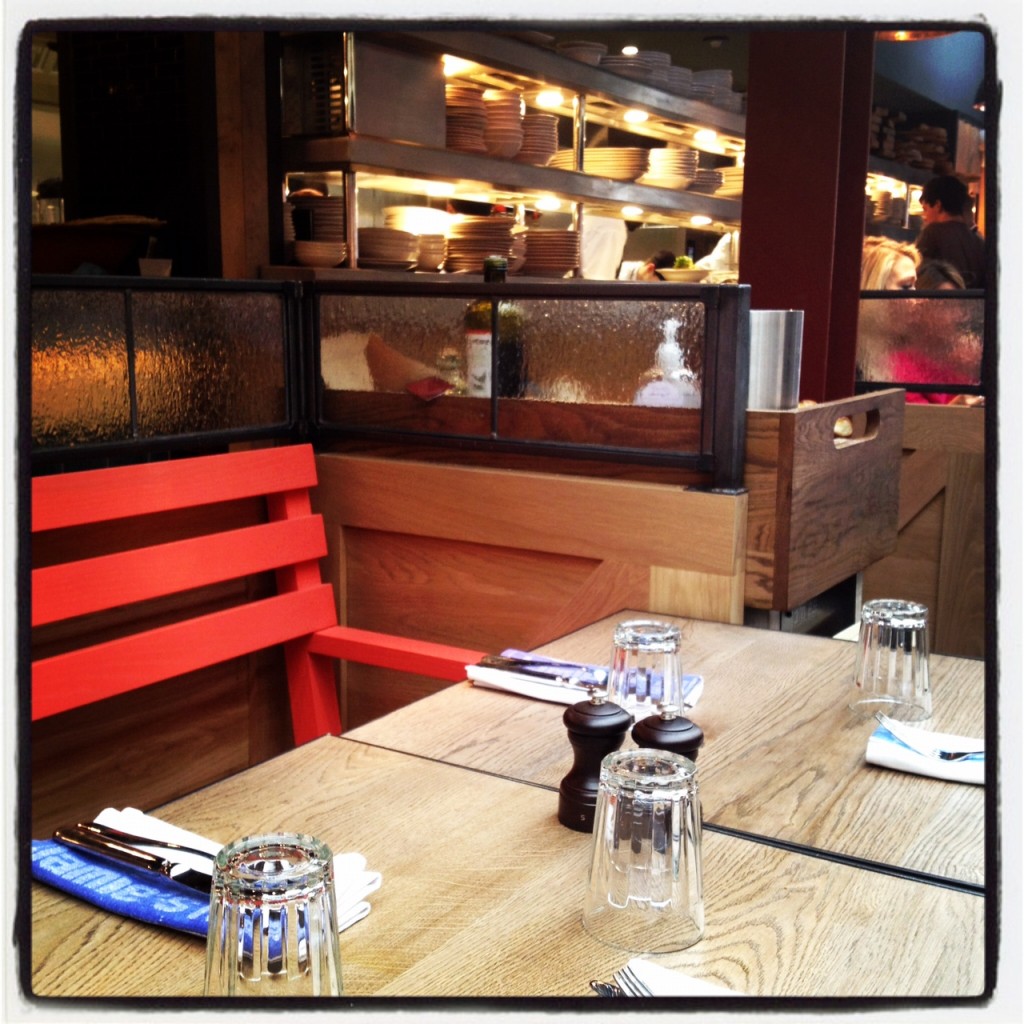 As well as the bar, there is also an open dessert and cold-starter preparation area, adorned with chillis and garlic, market-style vegetable crates and hanging salami and San Daniele hams, and further on, a very busy, semi-open kitchen. The service area is bustly, but diners are kept well out of the way. 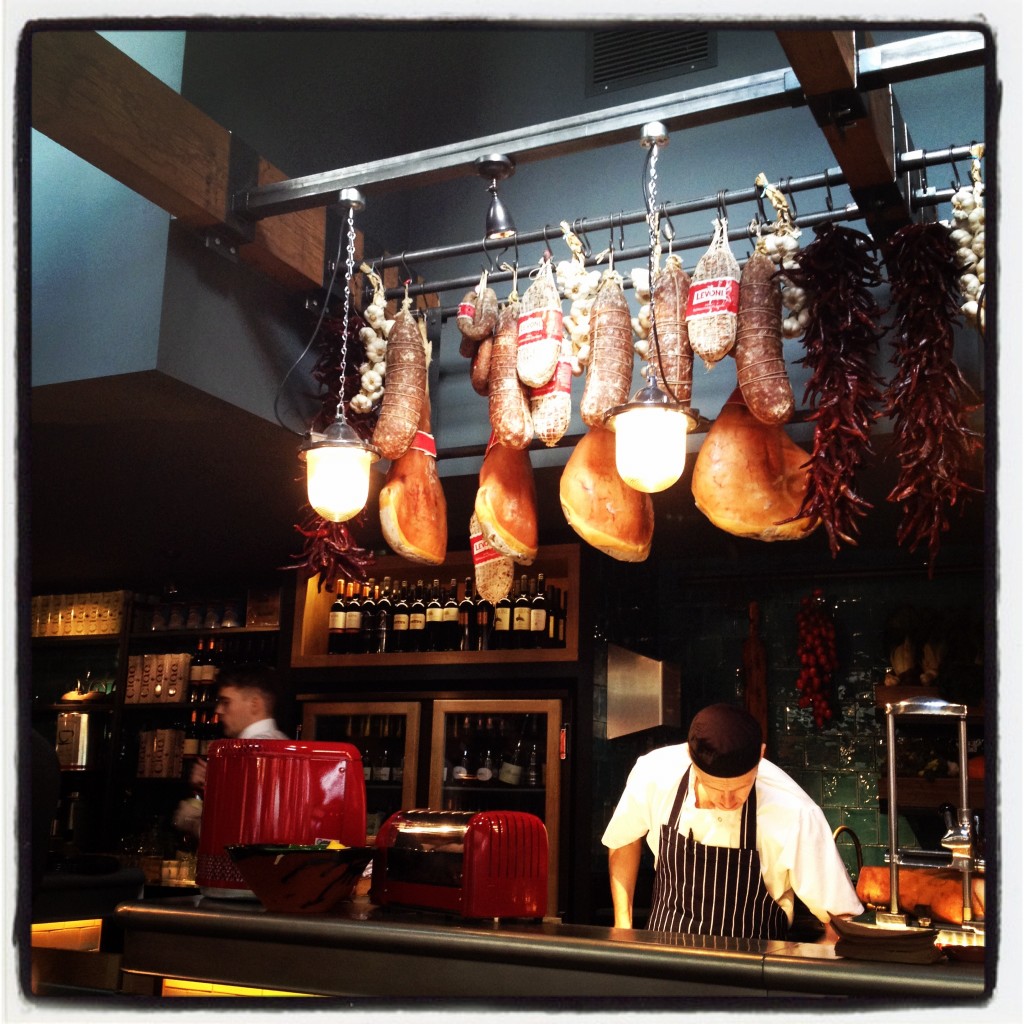 Onto the menu, the very first thing I spotted was Burrata with chilli and mint (£6.25), a fresh Italian cheese, made from mozzarella and cream. It’s all the rage, don’t you know?! In any case, it is very welcome in St Albans and I hope it stays here.

Ahead of that, there was, in fact, a selection of Nibbles or small bites that I had missed, such as an Italian bread selection (£3.75) or the ‘World’s best olives on ice’ (£3.75) – which did look quite cool.

I had to go for the Burrata (and I wasn’t disappointed) but I was hugely tempted by the Autumn Bruschetta – Beetroot ripple, smashed pumpkin, scamorza and cavalo nero (£8.95 to share), so I’ll have to go back for that. We also tried the Crispy Squid (£5.75) – not especially crispy, but the garlicky mayo was indeed, as described, very garlicky! Because we were feeling greedy, we also tried Jamie’s Funky Chips with fresh garlic and parsley (£3.25) but our waiter told us that the Famous Polenta Chips (£3.45) were his favourite. 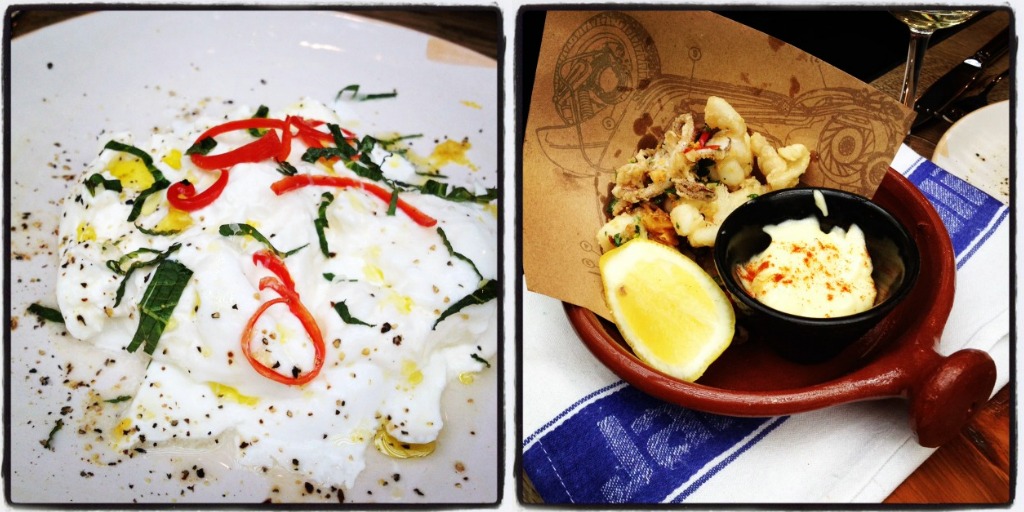 The planks (£6.85 a head) seemed particularly popular too looking around, small piles of cured meats, Italian cheeses, or sliced, char-grilled, seasonal vegetables served with pickles and chilli jam. I also noted the Artisan meat boards (£4.45 each) of English wild boar salami, Truffle salami and Levonetto tondo, again, to try next time. The planks themselves are long wooden boards, held up by two tins of tomatoes on your table, creating a little bridge ideal for picking at and sharing. 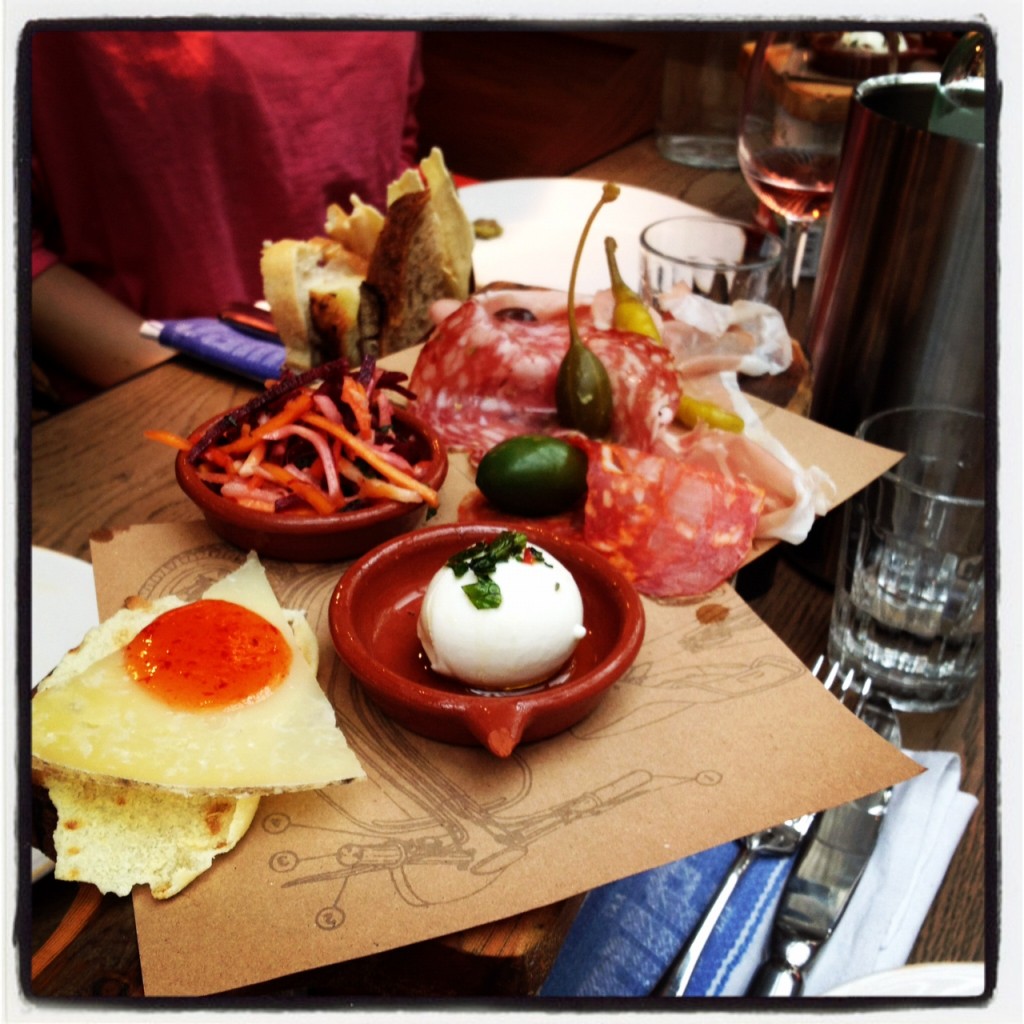 Mains are divided into Pasta and Secondi (Meat or Fish.) We tried the Meatball carbonara, which was made with a fresher, lemon-cream sauce, San Daniele ham, meatballs and rigatoni pasta (£7.25/£11.25.) I enjoyed it, I was happy with the flavour, I didn’t find it too lemony or too salty and the pasta was perfectly cooked. Heidi ordered the Prosciutto spaghetti (£6.25/£9.75) which was a little dry, but well-flavoured with Sicilian lemon, fresh parsley and strips of San Daniele ham.

Making a nuisance of ourselves again and peering across onto other tables, we spotted the Seaside risotto (£8.95/£15.95) which was served on a very large plate, and garnished with clams, mussels, prawns and Gurnard. The Truffled Turkey Milanese (£12.25.) is highlighted as ‘Jamie’s Favourite’ on the menu and was a hit amongst diners. It looked like a huge piece of flattened turkey, stuffed with Fontina cheese and Prosciutto ham, topped with a soft fried free-range egg.  The portion sizes all seemed to be generous and crucially, plates were taken away clean!

Jamie’s Dolci, or desserts were flying out fast, too. We wanted to order the Amalfi lemon curd slice (£4.95) but they were out, so instead we went for the Peach and almond tart (£4.95) and the JI Warm Brownie (£4.95) served with fresh raspberries, crushed Amaretti biscuits and vanilla ice-cream. Both desserts were substantial, and in typical Jamie Oliver-fashion, pretty tasty. 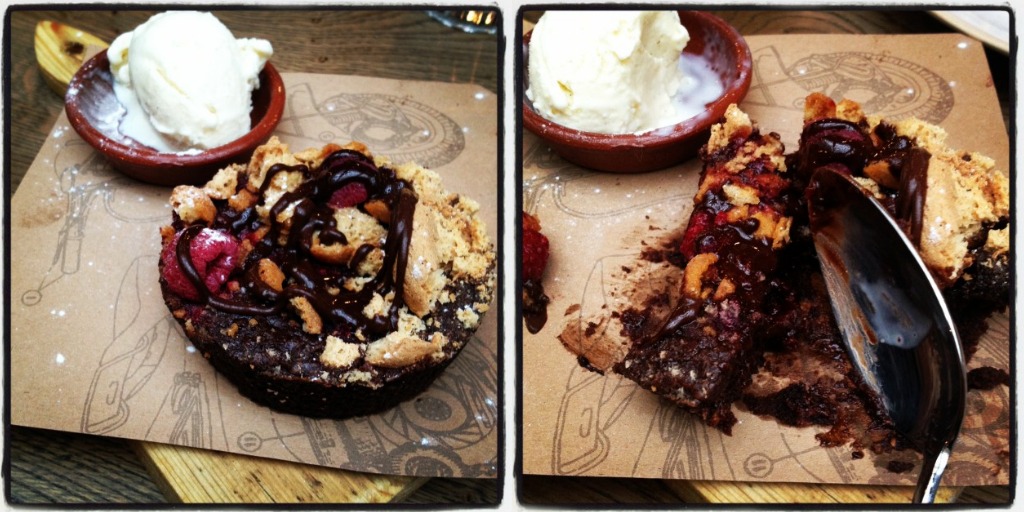 Having visited the old Bell, which was a dark and dingy alco-pop filled noisy pub, I’m pleased to say that Jamie’s Italian is a vast improvement. Jamie himself stopped by earlier on Monday to give the place a once over, showing that he is not as far removed from his business ventures as some might say. Gennaro Contaldo, Jamie’s long-standing mentor also popped in on Thursday. Gennaro is credited for training the chefs at Jamie’s Italian, making sure they are up to speed and ready to go. The restaurant itself, as with all the others in the chain, will be managed by Jamie’s team.

Upstairs has also been renovated to a high standard, with posh toilets (Crapper, no less), white washbasins with vintage taps and grey-polished tiles. There is a disabled toilet and baby-change on the ground floor and though the main entrance is at the front, there is a ramp at the back for disabled access, too.

We did find it to be extremely busy and whilst the entire restaurant was packed, the tables in the centre of the dining room were particularly crowded, with, as you would expect in St Albans, lots of parents with kids. I’ll have to go back with mine to try out the children’s menu as I was too busy being a lady-who-lunches and forgot to ask!

On Saturday Jamie’s Italian was well staffed, although this was pre-opening, so the staff were technically still in training and the restaurant itself may have been artificially busy. We lunched for over two hours, so it wasn’t by any means a quick lunch, but we did have three courses. Our waiter was friendly and knowledgeable, at one point, he started telling us about the village that the pigs had lived in that were now the San Daniele ham hanging above the counter! The tables at the front (looking out onto Chequer Street) appear to offer a little more room, but you don’t get to see as much of the action.

Despite the fact that St Albans is already saturated with chain restaurants, I have a feeling that Jamie’s Italian will be a popular local hang-out, particularly if Jamie’s cheeky charm is allowed to shine through his team and his staff are able to relax into service as the hype subsides. I’ll definitely be going back, I admire the ethos behind the restaurant (fresh food, house made pasta, seasonality in the menu, reasonably priced) and I’m pleased we have a Jamie’s here now.

It is possible to book at table at Jamie’s Italian on-line, though they also operate a walk-in policy and will try and seat you, if possible.

We paid for our own meals, though we were given a 50% discount on our food as a soft-opening. With wine, starters, mains, an extra side and desserts the price would have been around £35.00 a head.

Thanks Heidi for taking me along! 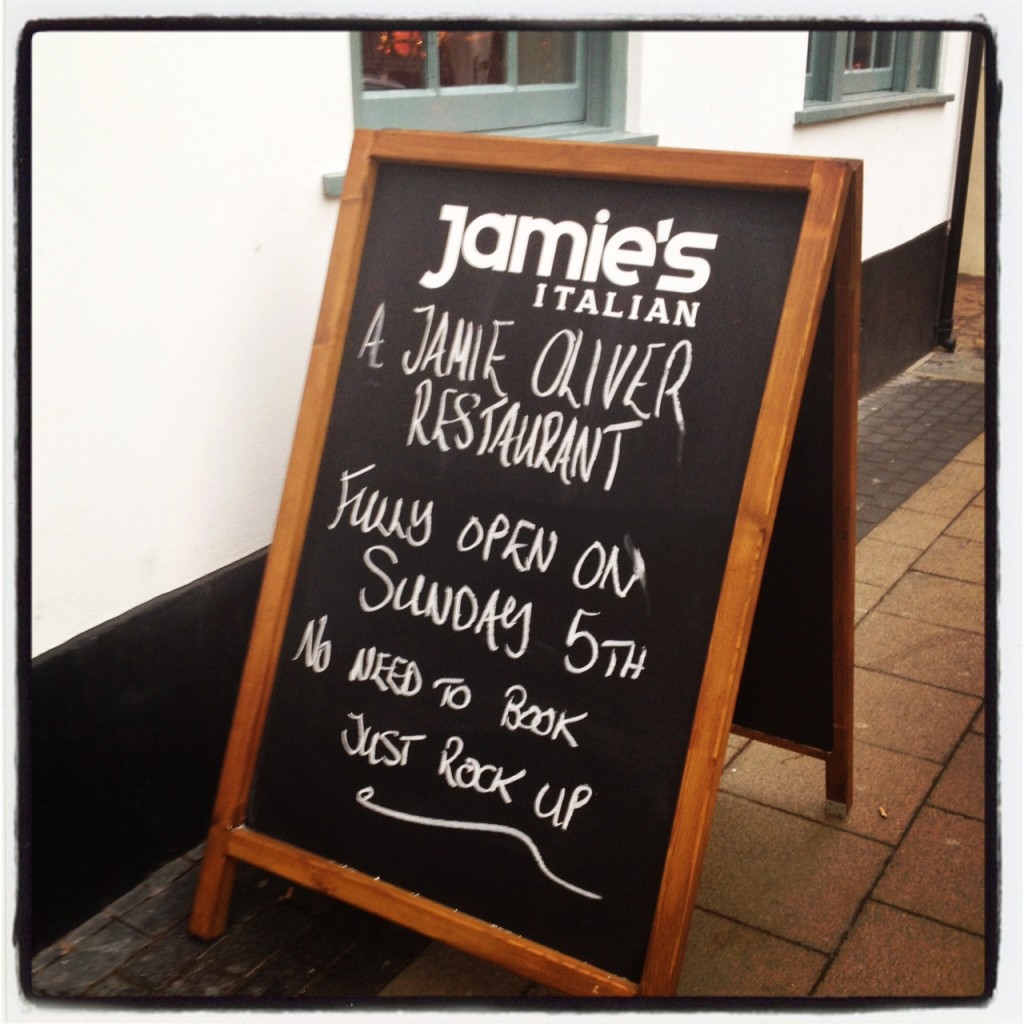 Have you eaten at a Jamie’s Italian restaurant? What did you think? Would you go again?