Anyone who has a chocolate addiction, as I have, will appreciate a good chocolate book and William Curley’s Couture Chocolate – A Masterclass in Chocolate provides the perfect hit. William Curley is Britain’s top Chocolatier (how I love that word), having won the title of the Academy of Chocolate’s Best British Chocolatier for the last four years running. William has worked in several Michelin-starred establishments, under Pierre Koffmann, Raymond Blanc and Marco Pierre White, before moving to the London Savoy as Chef Patissier where he met his Japanese wife, Suzue. William now owns two chocolate boutiques with Suzue, whom he credits as his inspiration.  He’s a hard man to beat and Couture Chocolate gives us a little glimpse as to why. 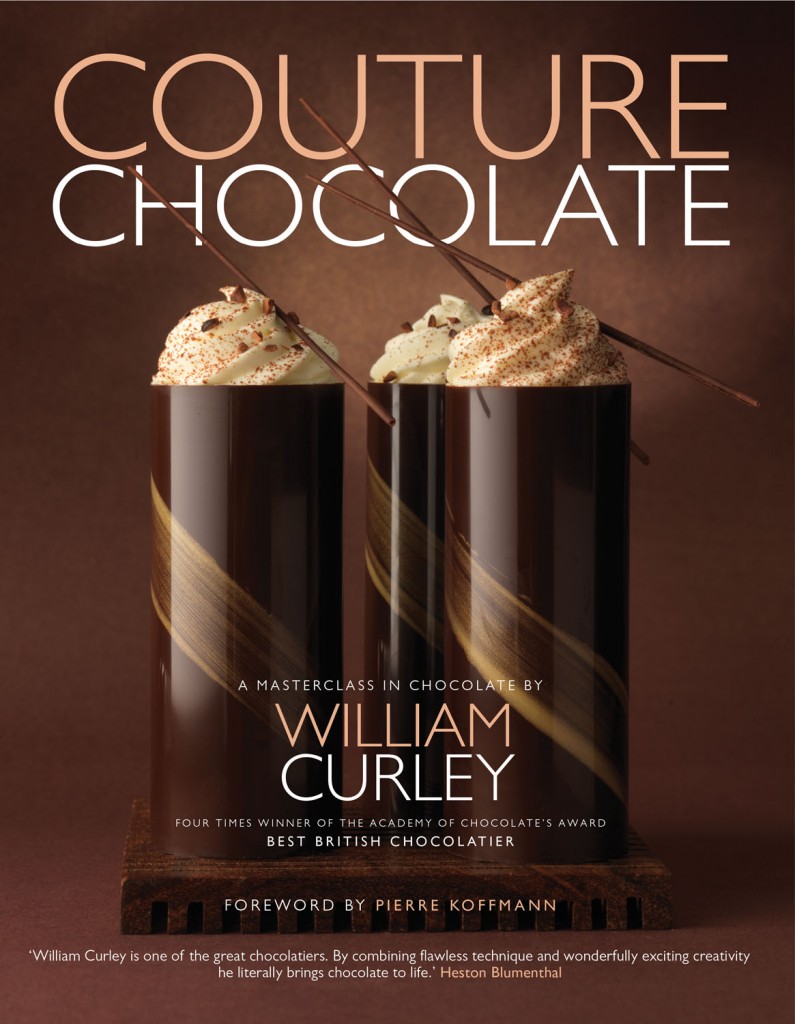 This is not a book for the chocolate-shy. This is a book to embrace boldly with both hands as William unveils all the techniques and secrets to creating some of the most stunning chocolate creations. It is very comprehensive. If you were thinking about becomming a Chocolatier, this book would definitely set you on the right track. Think of it as distance learning by chocolate. Having said that, for those of us with nothing more than a mere interest in lovely chocolate, this book is a feast for the eyes and there any many recipes in here which will easily tempt you into tempering and charm you into chocolate-making at home.

Beginning with the essentials, Couture Chocolate explains the Discovery and Origins of Cocoa (wild cacao was originally consumed as long ago as 1500 BC by the Olmecs) with South American countries such as Venezuela, Ecuador, Mexico, as well as the Caribbean growing some of the best cocoa in the world.

There are three types of cocoa tree: the Criollo, the Forastero and the Trinitario and cocoa grows best in high humidity. There is a simple description of the Bean to Bar process, beginning with cocoa pods and ending in Couverture chocolate (cocoa butter is added to the cocoa mass and then processed with sugar and vanilla.) We are also given a breakdown of the main varieties of chocolate (dark, milk, white, powder, nibs) as well as correct storage and the all-important method of tempering.

There are also step-by-step instructions and photographs for making a basic Ganache (chocolate, cream, sugar and butter)  – the backbone for many of the chocolate recipes throughout the book and then we begin…

The opening chapter of the book covers Truffles (balls of ganache that can also be used to fill chocolate and patisserie) and includes William’s recipes for his House Dark Truffle and House Milk Truffle as well as some more unusual flavours, such as Matcha and Pistachio Truffle and Cassis & Hibiscus.

Onto Couture Chocolates, essentially, the high-end, custom-made chocolates that you can find at William’s boutiques in Richmond and Belgravia. William takes you through the stages, such as making an infused or flavoured ganache chocolate, setting it into a tray, making layers (such as Feuillantine, Pistachio or Marzipan) followed by dipping and decorating. Imagine creating fillings such as Apricot & Wasabi, Sea Salt Caramel, Rosemary & Olive Oil (shown below) or Yuzu (Japanese citrus fruit) at home! 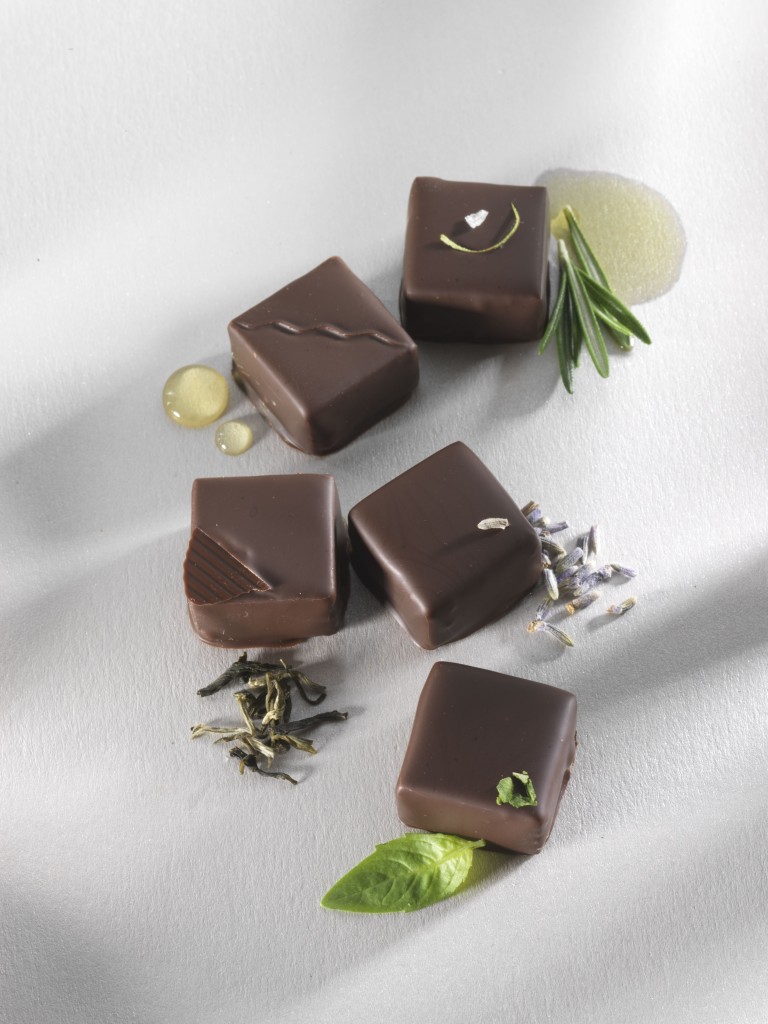 There is also a delightful chapter on Bars & Bites that would suit those wanting to make their own stunning chocolate gifts to giveaway. For example, there are step-by-step photos and instructions for Fruit & Nut Decorated Bars, Infused Bars as well as Chocolate Thins and Chocolate Lollipops.

A chapter on Bouchées (small delights) includes chocolate-coated Cinder Toffee (a childhood favourite of mine), Chocolate Macaroons, beautiful Hazlenut & Feuillantine Cakes (shown below) as well as a posh twist on a marshmallow teacakes, with blackcurrant purée or orange marmalade. I was also particularly taken by the Millionaire’s Shortbread and will be sharing the recipe for that tomorrow, so stay tuned! 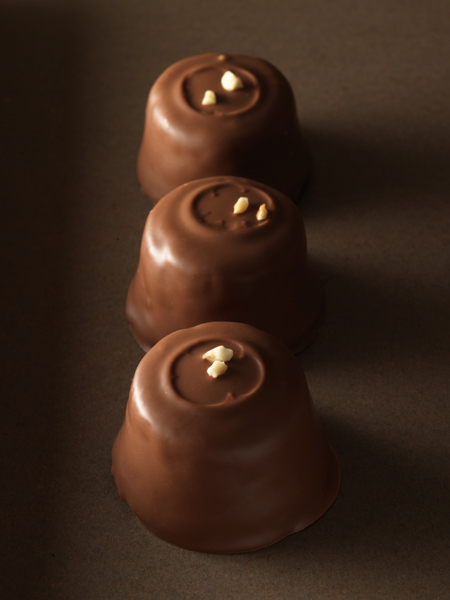 For those with a real interest in creating stunning desserts, flick straight through to the chapter on Patisserie, where you’ll find all the secrets to decorating with chocolate (how to make hoops, curls, waves and curls) before moving onto a classic Chocolate Mousse, stunning Chocolate Tarts (shown below) a Chocolate Mille-Feuille, or William’s Black Forest sponge with white chocolate and kirsch mousse. You’ll also find a recipe for Chocolate Tiramisu Caskets, shown on the cover of the book. 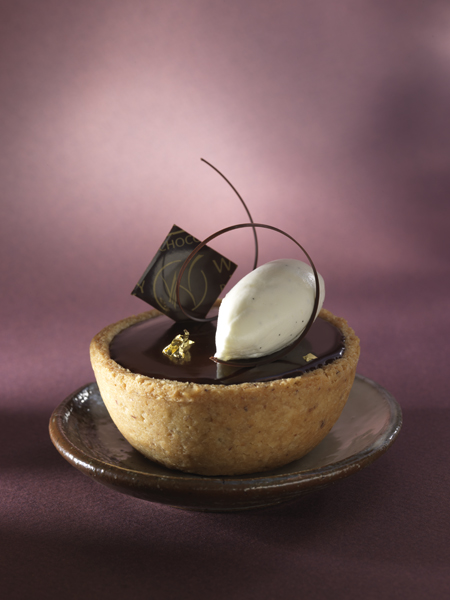 In case you haven’t had your fair share of chocolate by now, the final chapter reveals Ice-Cream, Sauces and Drinks. The Chocolate and Peanut ice-cream is firmly bookmarked for the summer along with William’s Chocolate Sauce and of course, I’ve spotted the Chocolate and Praline Spread (homemade Nutella!) as well as a very seductive White Chocolate Martini.

At the very back you’ll find a Directory of Stockists for all your chocolate needs, as well as an A-Z of Ingreditents and Equipment.

All in all, a veritable feast in chocolate. Is there anything missing? I haven’t spotted a recipe for William’s Signature Hot Chocolate so I’ll have to force myself to visit William’s shop in Richmond for that!

William Curley’s Couture Chocolate is Published by Jacqui Small LLP (An imprint of Aurum Press) with an RRP of £30.00 – currently £19.07 on Amazon.

Closing date: Wednesday 15th February 2012 The winner will be announced the next day.

Thank you to Jacqui Small Publishing for my review copy and for the giveaway prize.