Hooray – 7th September 2017 saw the launch of Wild Honey and Rye: Modern Polish Recipes, my debut cookbook published by Pavilion Books. This is a day I will never forget because it was the day a very big dream became real. If you believe in numerology, there is great significance in the number seven; there are seven days in a week, Newton identified the seven colours of a rainbow, September means the seventh month in Latin. Seven years ago, in September 2010, I had just enrolled in an online Diploma in Food Journalism. Shortly afterwards, in November 2010, I started this blog as one of my first assignments.

Although I haven’t always appreciated it, symbolism, it seems, is quite important to me. I chose to be published by Pavilion Books because our first meeting had taken place in a room opposite my old lecture halls in Bloomsbury – a sign I took as being on the right path. As often as possible and particularly when I have a significant decision ahead of me, I try and go with my instinct and I look for signs as reassurance that I’m heading in the right direction. It was all very surreal and overwhelming, as big moments usually are. On that particular day in November 2015, as I left Pavilion’s offices with bright blue skies beaming over me, I remember strolling past Senate House Library and past my first student halls feeling a strong sense of going back to something as well as forwards into something new. Of course, I wasn’t to know then that the offer of a publishing contract would come, but I hoped that it would and of course, as Wild Honey and Rye now shows, it did. 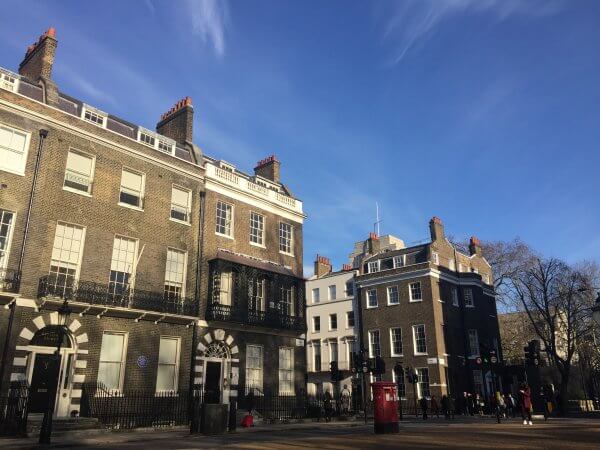 I wrote about the cookbook process itself here in an earlier post. Aside form having no roof at the time, the process was mostly straightforward and hugely enjoyable. Throughout, I kept in mind that all my food heroes, from Elizabeth Luard to Nigella Lawson must have started somewhere and that they wouldn’t be where they are today had they not just kept moving forwards. I also kept in mind that there would be some people who liked the book and some who wouldn’t. I hoped and prayed that it would be positively received and so far there has been a stream of bright and cheerful 5* Amazon reviews (thank you!) and heaps of positivity all round. It seems Polish food can be exciting and inspiring and cool, who knew?!

Publication day itself was really like taking a big deep breathe and then exhaling. I was nervous, yes, but excited more. There was joy and elation and giddiness and champagne (and vodka) but in the quieter moments, I was just so happy to have been able to share my Polish food through Wild Honey and Rye.

My Mum came to spend the week with us, which was lucky because it also coincided with the madness of back-to-school week. My family and original antenatal group friends came over to eat Polish food. A week later, I hosted a gathering at my favourite Modern Eastern European restaurant called Baltic in London, where the chef Marek made some canapés to tie in with the book and where barman Karol created a divine Polish plum and chilli martini to mark the occasion. Katie at Pavilion Books gave a speech that made me cry and I was very spoilt with gifts of flowers, champagne and even food styling props. It was like all my birthdays rolled into one!

I was so grateful for all the friends came along to celebrate with me, including my oldest school friends from Cheshire, friends with a Polish connection, buddies from the online and blogging world – travelling even as far as from Newcastle and of course, the whole book crew from Pavilion as well as the shoot team, minus Alexander who we missed.

When I decided not to return to the law ten years ago, I can honestly say that I didn’t expect my second career to be anything near as exciting as this one has turned out to be. I saw every glass raised during the whole month as an opportunity for me to say thank you to those who have supported me throughout my journey.

It’s fair to say I have been overwhelmed by the response to the book so far. Readers up and down the land (as far as the Shetland Isles!) have been making pierogi (Polish dumplings) sourcing Polish cheese or creating their own fillings. Young people have been baking and achieving Scout badges for their efforts. One little girl, a third generation Pole, said that she baked my Plum and Poppyseed cake and that it was as good as her Babcia (or Granny) makes – phew. Many have identified with my dual-heritage upbringing and have said that it has helped them put put their own upbringing into context, others have said it has helped them to reconnect with Polish food. Some have booked trips to Poland. One reader shared a photo of the book arriving in Hawaii, another friend took a photo of Wild Honey and Rye in Omnivore Books in San Francisco. Lots of people have also commented on the beautiful design of the book and on the light and modern photography. Every single photo and message I have received has made me bounce with joy – thank you. 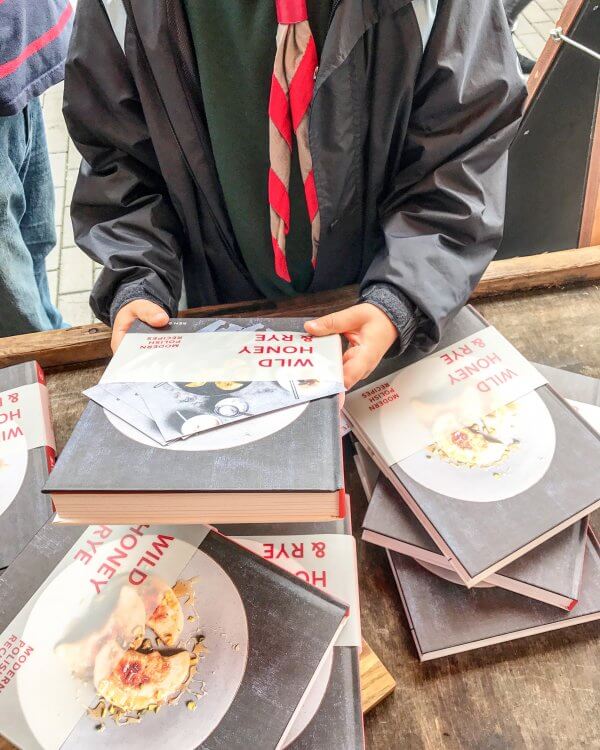 I was also super happy to receive some very special press coverage. delicious magazine selected Wild Honey and Rye as one of four September ‘Hot new cookbooks’ and Sainsbury’s are running a series of four recipes in their autumn edition of Bake Magazine. I was interviewed by Brin Best for Tydzień Polski newspaper (extended version here) which is one of the oldest running Polish newspapers in London. There were mentions in The Herald, Scotland by Sumayya and on a new blog called Polish at Heart by my friend, Ania. I took my book and some plum cake onto Nick’s afternoon show on BBC Three Counties Radio. I also received a very nice letter from the Polish Ambassador in London, to say that he would welcome Wild Honey and Rye into his culinary collection. There’s a special mention below to all my food blogging friends, too, who blew me away. 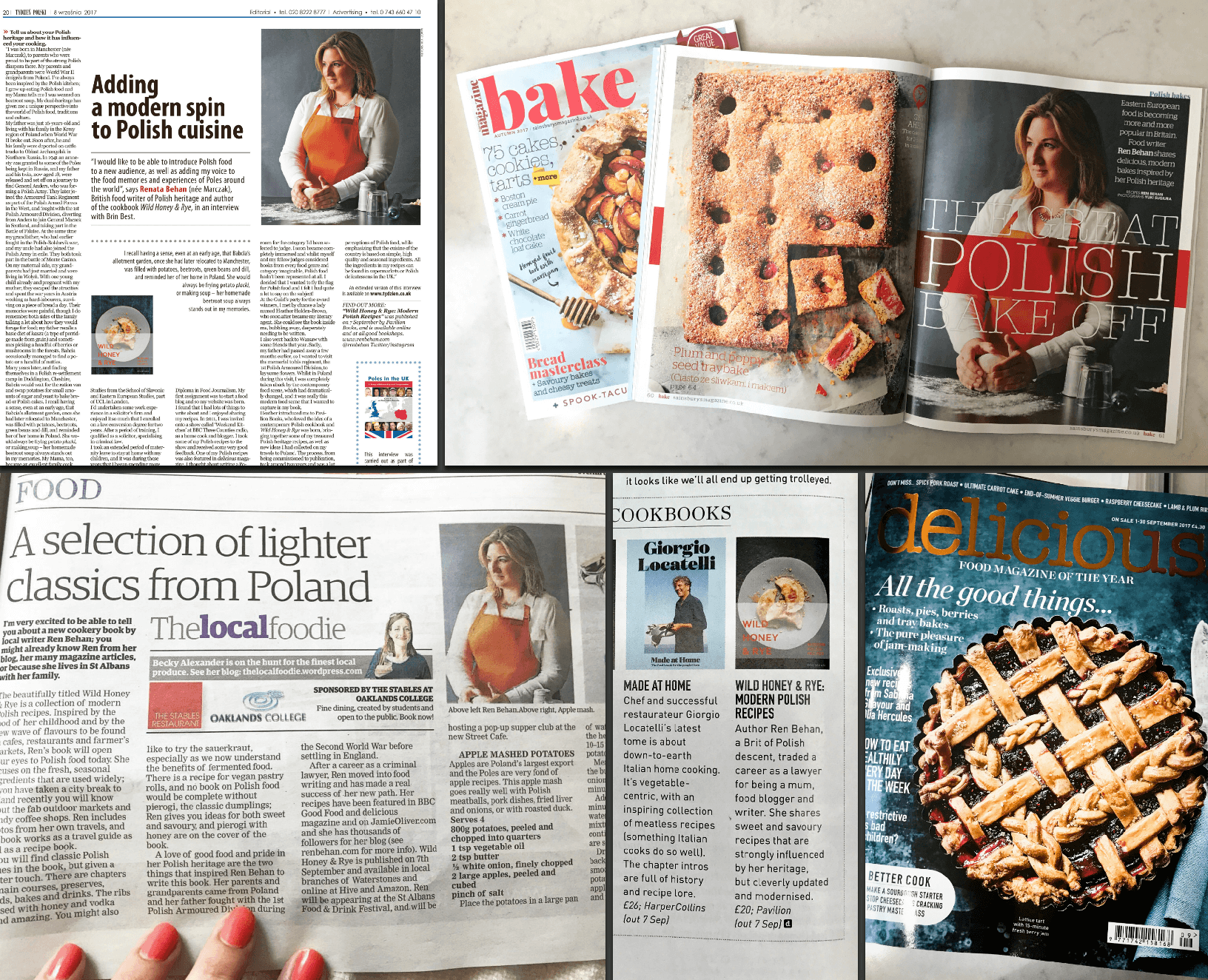 Locally, September was an amazing month too because we celebrated the 10th St Albans Food and Drink Festival. I had lots of support from Becky ‘The Local Foodie’ at the Herts Advertiser, as well as from the Food Festival team itself and Radio Verulam. I hosted my first Wild Honey and Rye supper-club at Street Cafe (a huge thank you to Rita and the team there) and conquered my fears of cooking live during my first cookery stage demo.

I have lots more exciting events in the planning so keep an eye on my shop and events page for more info. 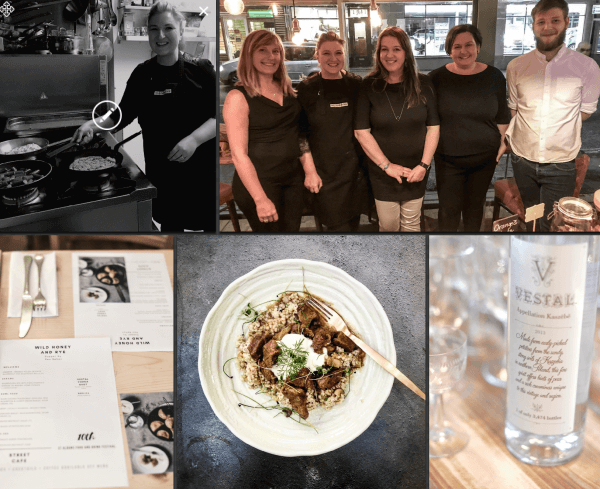 Thank you to all who came along! 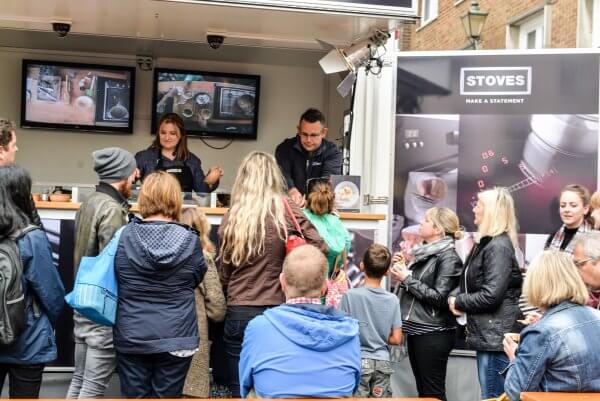 And so now, I find myself, once again, sitting at my kitchen table, catching up with my blog and feeling so, so grateful. This space has very often been my window out into the world, as well as a little window into my world. If I look to the very beginning of my journey into food writing, almost seven years ago, I can see that there has been one key factor which has encouraged me to continue and that is the sense of community and support that I have felt very strongly whenever I shared a recipe, experience or my thoughts. Without that sense of community, whether prompted by way of a comment from a reader, or a share by a fellow blogger, I wouldn’t have felt compelled to continue.

I was particularly touched by the fact that some of my best blogging pals rallied around me on publication day and during the weeks that followed. They sent messages of support and looked forward to receiving the book to cook from and review. Often, when I have sat here, in between nap-times and nursery runs, very much feeling the quietness, these writers have inspired me to keep my blog going. Their posts also showcase, I believe, the standard that British blogging has reached – that there should be such beautiful photography throughout and such very kind words within and I’m looking forward to sharing them with you in upcoming posts.

Join me next week for the Wild Honey and Rye Polish Cookalong!

If you’d like to try some recipes from Wild Honey and Rye, you can find three of my favourite recipes over on Great British Chefs:

Pierogi Ruskie (with Cheese and Potatoes)

Wild Honey and Rye: Modern Polish Recipes published by Pavilion Books is currently available on Amazon for £13.60 – grab your copy now and join us next week for the cookalong!

Thank you for your support (and for buying the book and leaving reviews) and to all at Pavilion Books for their faith in my Polish recipes and for producing such a beautiful cookery book.

I think I’ll have a little rest now…