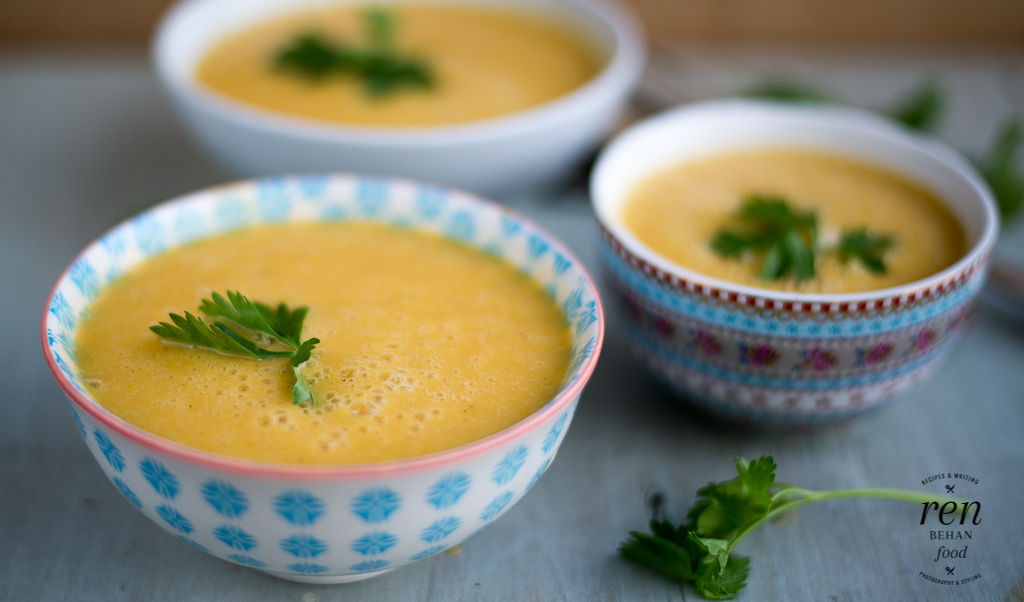 With a new baby in the house, I’ve been really keen to try and keep the winter bugs and germs at bay. This has been particularly tricky with two older school-aged children, though I think it’s helped that we’ve had such a mild autumn. Even so, usually by this point in the school term, the children will have had a couple of days off sick, but this year, so far, we’ve had no time off and no trips to the doctor. So what have we done differently? Well, firstly, ordering a fruit and veg box once a week has really helped, as it has meant always having a selection of seasonal vegetables on hand to throw into a big pan for a soup or to pad out a casserole or stew, with fruit to snack on or to turn into a lovely crumble. My second secret bug-fighting weapon has been my Froothie Optimum 9400 – a power blender that I’ve been trying out recently to make blended soups, smoothies and homemade raw dips and nut butters. 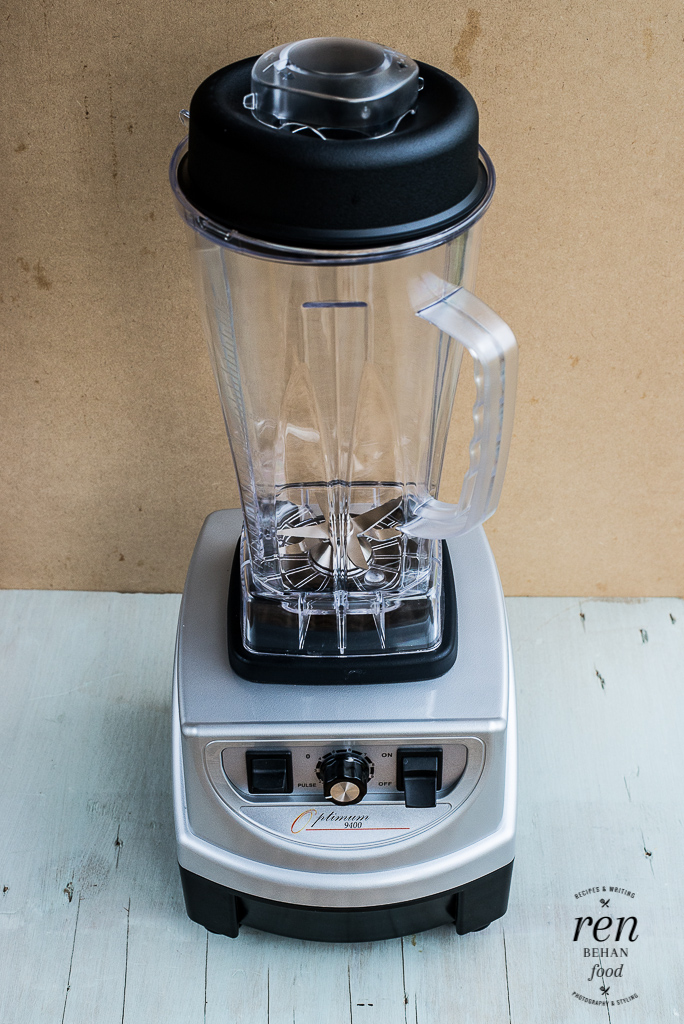 I’ve definitely found in the past that if you store kitchen gadgets away in the cupboard, you use them much less than if you keep them out on the countertop. As I’ve mentioned before, space in my kitchen is at a premium, so when my Froothie Optimum 9400 arrived for me to road-test, I decided to take the bread bin to the charity shop to make room for the blender to stay out permanently. This turned out to be a really good move – it means we’ve been eating less bread (typically there would be white bread, crumpets and croissants on the go) and any bread that I do now buy is bought fresh, or stored in the freezer. Replacing the bread bin with a blender has also meant less grazing on hot buttered toast throughout the day! 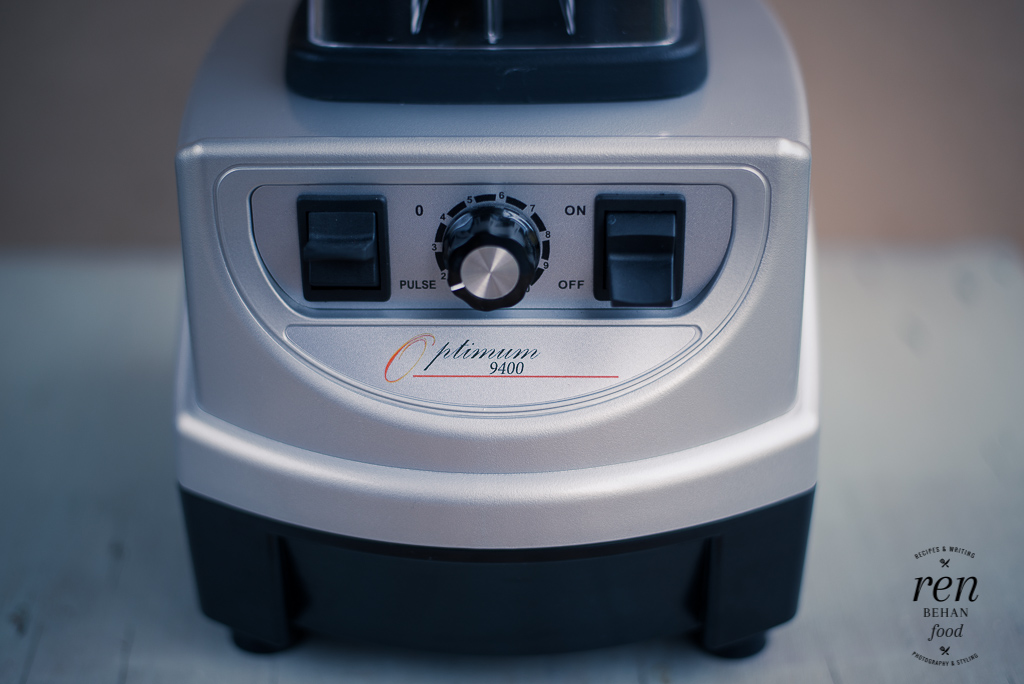 I’ve also found that since the Froothie Optimum 9400 can handle raw ingredients, including vegetables, nuts, seeds and all kinds of fruit, you are literally only ever a few minutes away from a cup of something tasty and nutritious in the form of a soup or smoothie. My little girl has discovered a love of soy milk (which she calls soil milk!) so I’ve also been making lots of milkshakes and smoothies with frozen bananas and a pinch of cinnamon or cocoa. The next few weeks and months will see me weaning our youngest, and so the Froothie Optimum 9400 will be used even more often for those ‘first tastes’ of pureed fruit and veg. 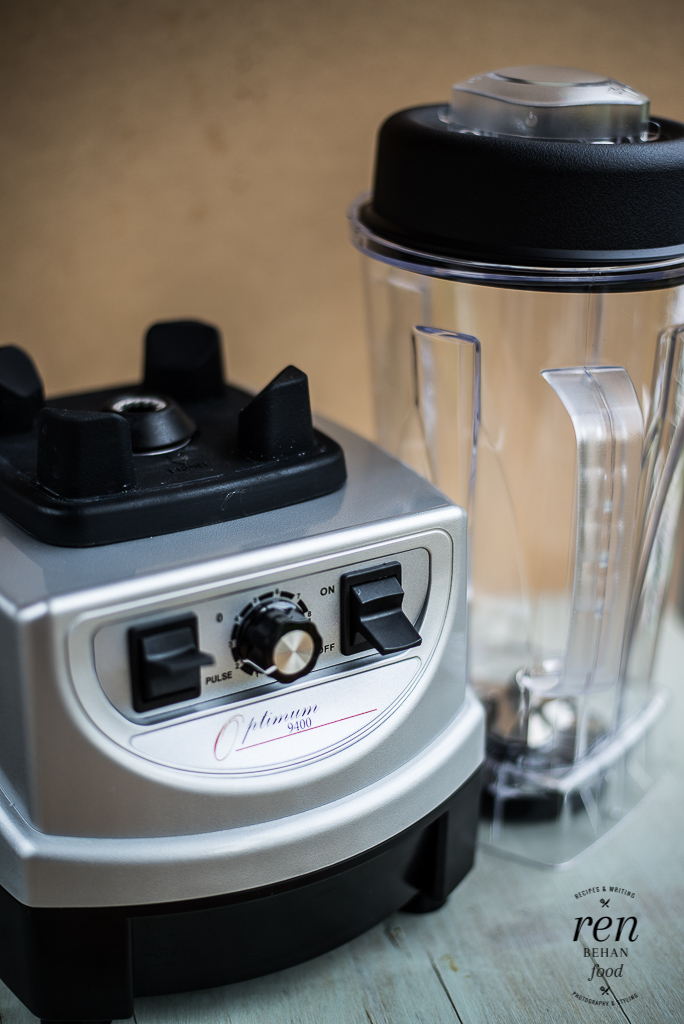 As a family, we also love blended vegetable soups in the winter months. They are warming and nourishing and so simple to make. As soon as the kids get home from school, they head straight for the kitchen to find out what soup I’ve made. Within minutes, they can be sitting down and tucking into a warming bowl or even a cup of soup – the perfect bridge to dinner time. 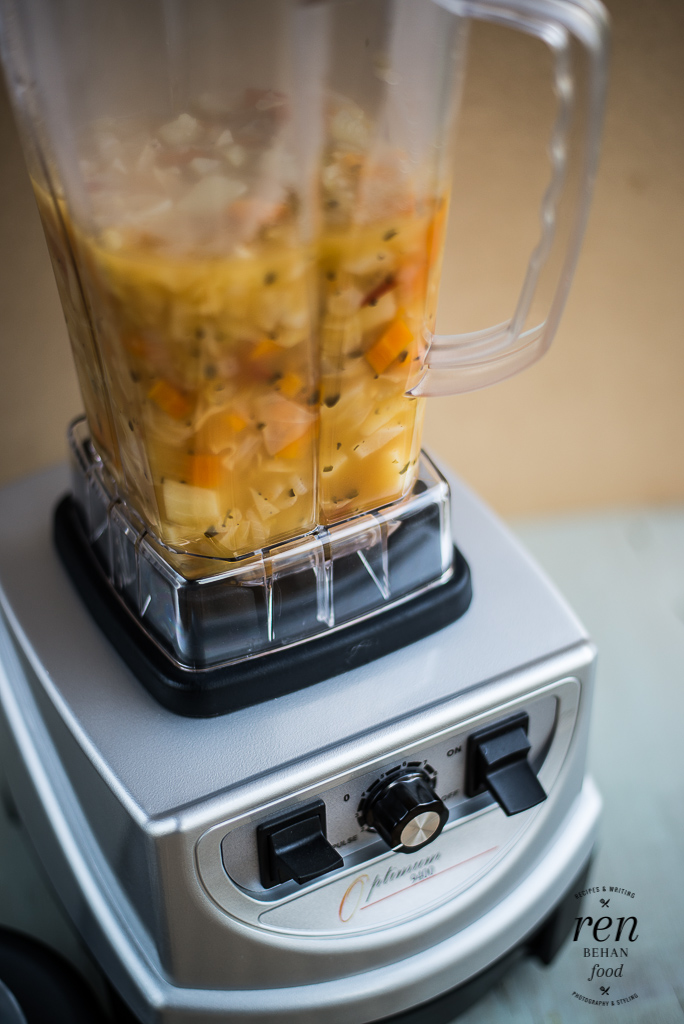 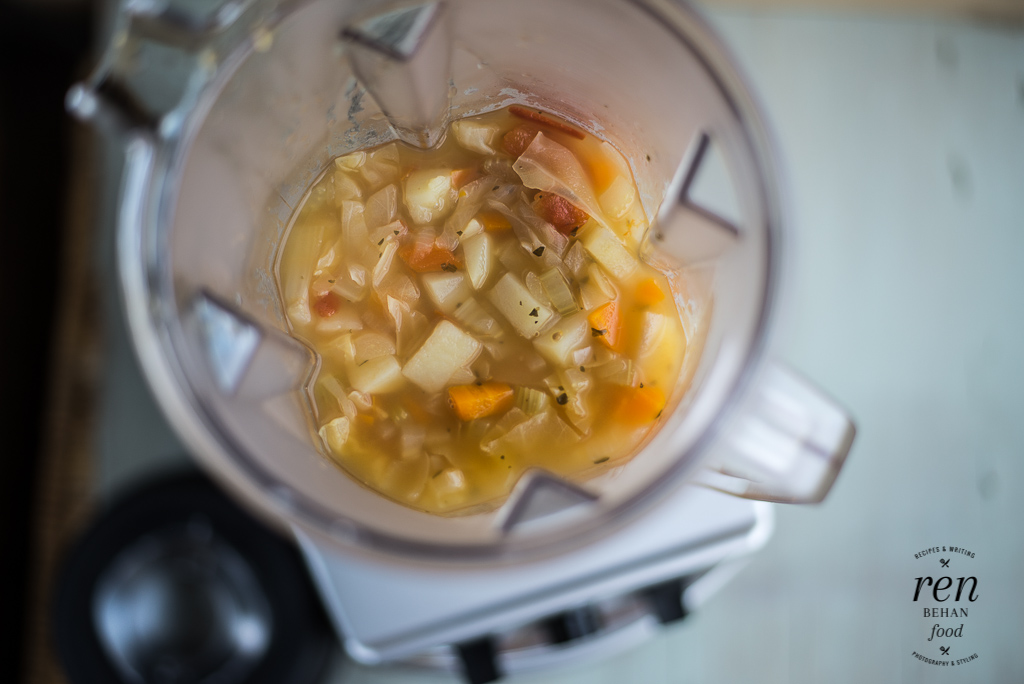 So, I’m very happy with my Optimum 9400 and there are still many more recipes to try. It’s easy to clean (once I’ve blended, I simply pour a little washing up liquid into the jug along with some warm water and then pop the lid back on and give it a quick whizz, followed by a quick rinse with clean water). 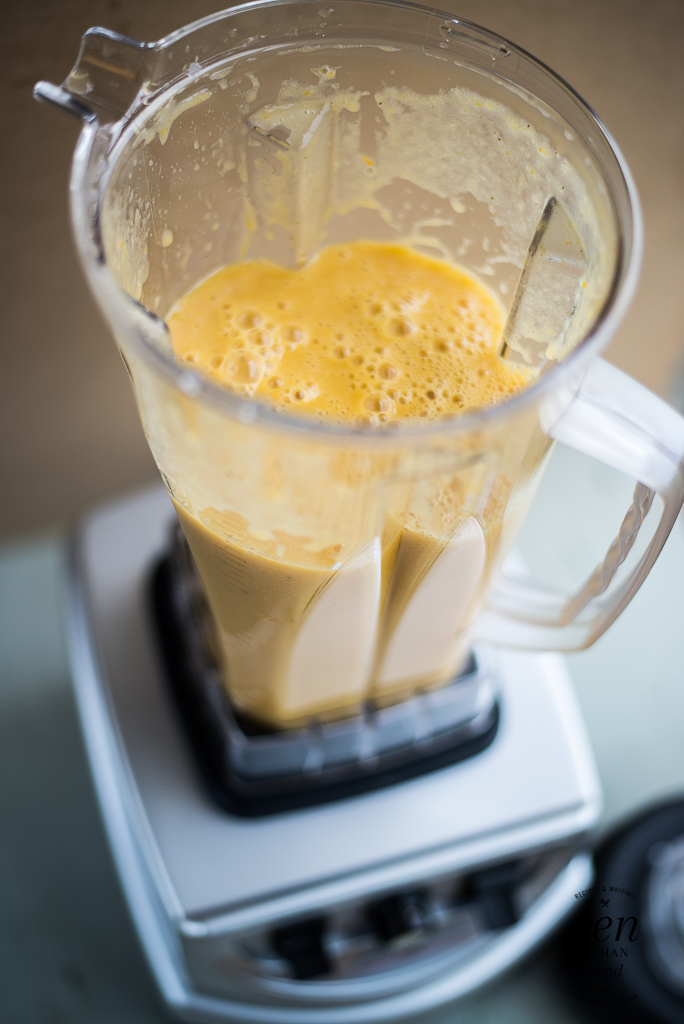 Buying a power-blender is an investment, but once you have one you can make your own nut milks, blend your own flour, make nut butters, smoothies, ice-cream and sorbet from frozen fruit, custard, instant cheese sauce, and hot soups – so it’s a great asset in the kitchen. The pulse function will also finely chop onions, grate cheese and grind coffee beans.

I’ve also joined the Froothie Ambassador team which means that I’ll keep a badge up on my site (in the sidebar on the right hand side) that you can buy your product through and you can also ask me any questions you like within the comment box and I’ll make sure that they are answered. 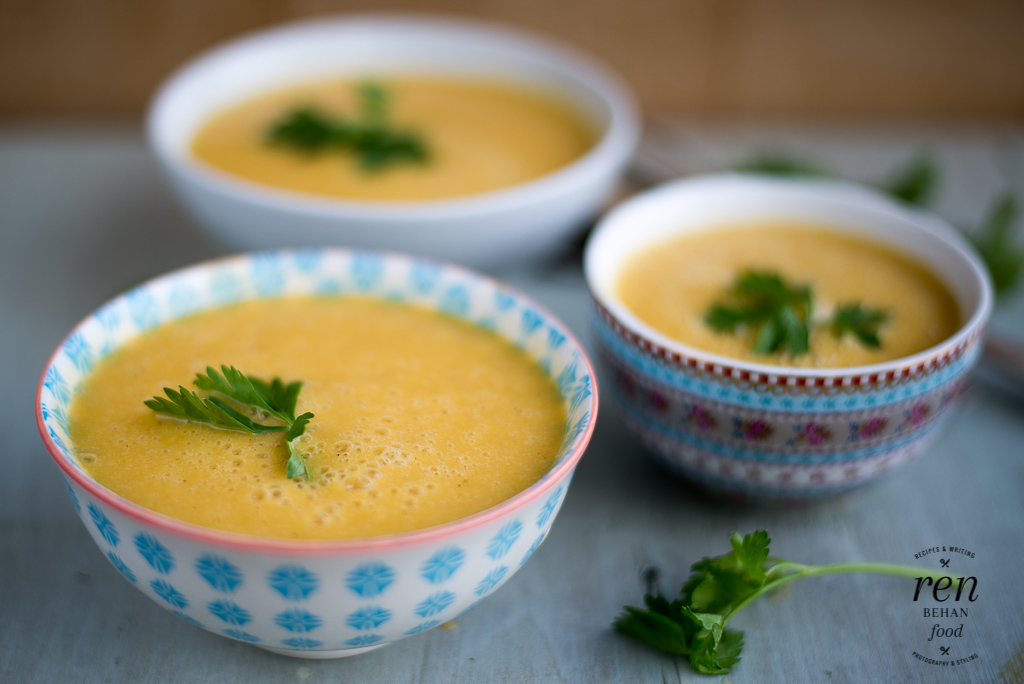 Froothie also have lots of You Tube videos you can watch to get an idea of what the Optimum 9400 can do.

Although you can make raw soups – that is to say you don’t have to pre-cook any of the ingredients as the power of the motor will also heat and cook the ingredients – I tend to cook my base of onions, carrots and celery in a little olive oil, before adding any other vegetables and a little stock. However, I’m also going to experiment soon with a soup made entirely from raw ingredients in my Optimum 9400 so I’ll let you know how I get on. Using the Optimum 9400 means you get a silky smooth result – add a touch of soy milk for a creamier finish.

For a variation of this soup, use four or five potatoes, instead of carrots, and leave out the tomato. Add one cup of soy milk when blending.

I’m linking up my Winter Vegetable Soup with Simple and in Season over on Feeding Boys and a Firefighter this month. 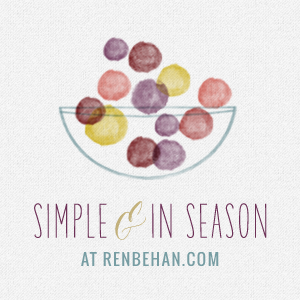 Finally, I’m also sending this to Lisa’s Kitchen hosting No Croutons Required on behalf of Jac at Tinned Tomatoes. 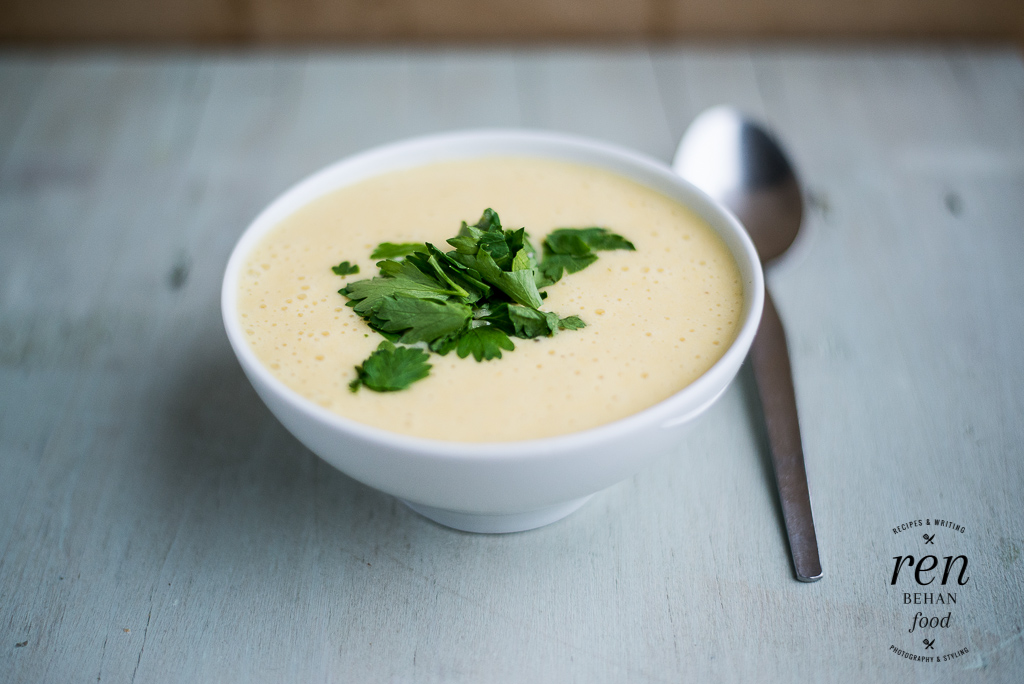 Disclosure: Froothie UK sent me an Optimum 9400 Power Blender to use and review at home. I have not been paid for this post and was not required to give the blender a positive write up. All opinions are my own. Affiliate links included.