The summer is in full swing and it’s been so hard to ignore the sunshine in order to sit down and write. There have already been many food-related highlights to share with you, but one sunny evening that stands out in particular was an invitation to a ‘blogger supper’ above Jamie Oliver’s Fifteen. The evening promised to be an exclusive event with “eating and drinking and merriment” – with the JamieOliver.com team very keen to extend a friendly hand to some of their favourite food bloggers. Needless to say, it was a huge privilege to have been on the list and to be able to spend the evening finding out a little more about the team behind Jamie’s ever-flourishing empire. 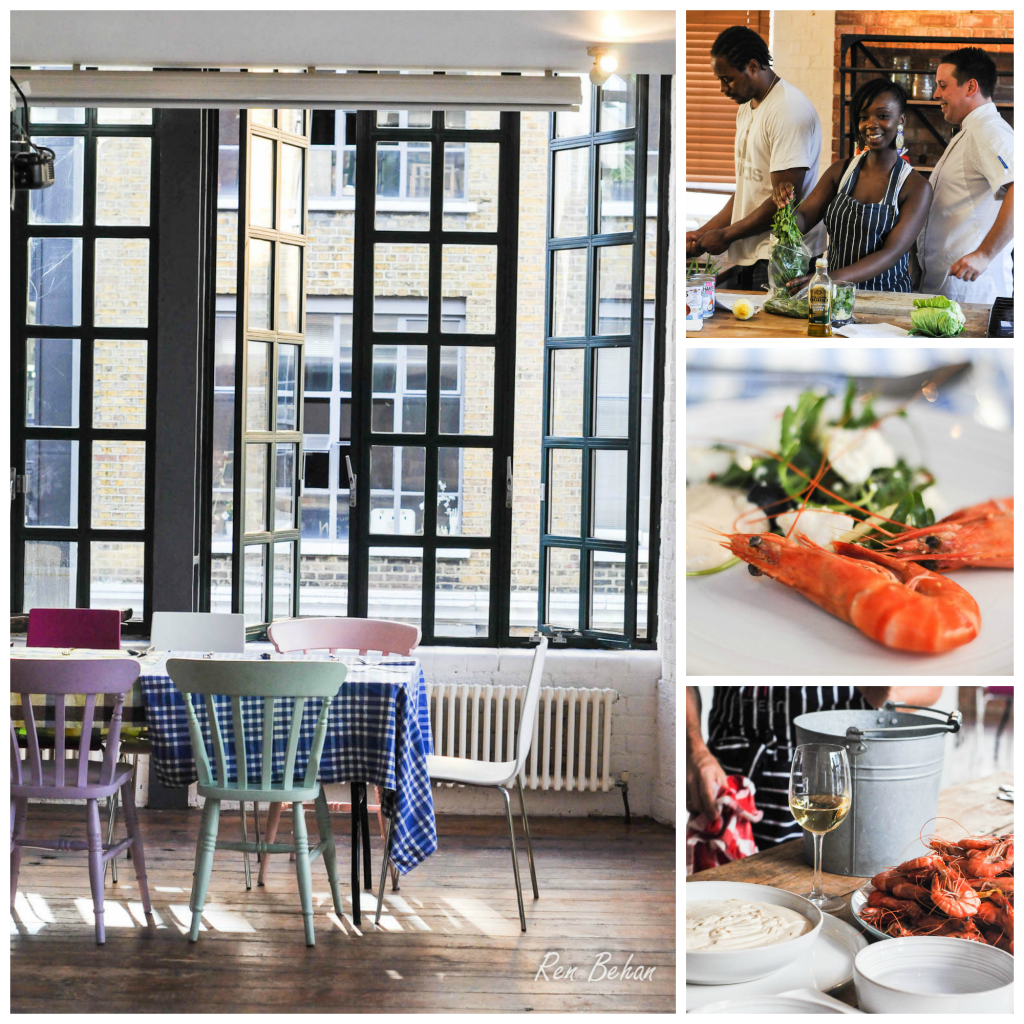 Jamie Oliver is many things, but he’s no fool. For a boy who left school with just two GCSE’s, his success in building such a vast and globally-recognised ‘brand’ is nothing short of phenomenal. Ever since hitting our screens with The Naked Chef, Jamie’s mission has been clear and very specific – to help people to become better cooks. Staying true to his original character, he continues to share his message in his very own relaxed, laid-back, Essex-boy trademark style. I very much remember watching some of his earliest episodes and most, if not all, of his books have been used and splattered with sauce in my kitchen in one way or another over the years. In a very pleasant twist of fate, I’ve recently found myself writing for the JamieOliver.com site – something which still fills me with both a sense of fear and excitement each time a post gets published.

Jamie has always struck me as someone who is keen to keep up with current trends and so it was perhaps by no accident (with my food blogging hat on this time) that I found myself sitting at a mismatched chair at one of his tables. Although Jamie himself was unable to attend, we watched a specially pre-recorded message from him, during which he welcomed us all and wished us an enjoyable evening. It was nice to learn that Jamie has a good amount of respect for food bloggers – recognising perhaps that we’ve helped change the traditional food writing landscape – if nothing else, into something instant and very fast-paced that he’s keen to keep up with! 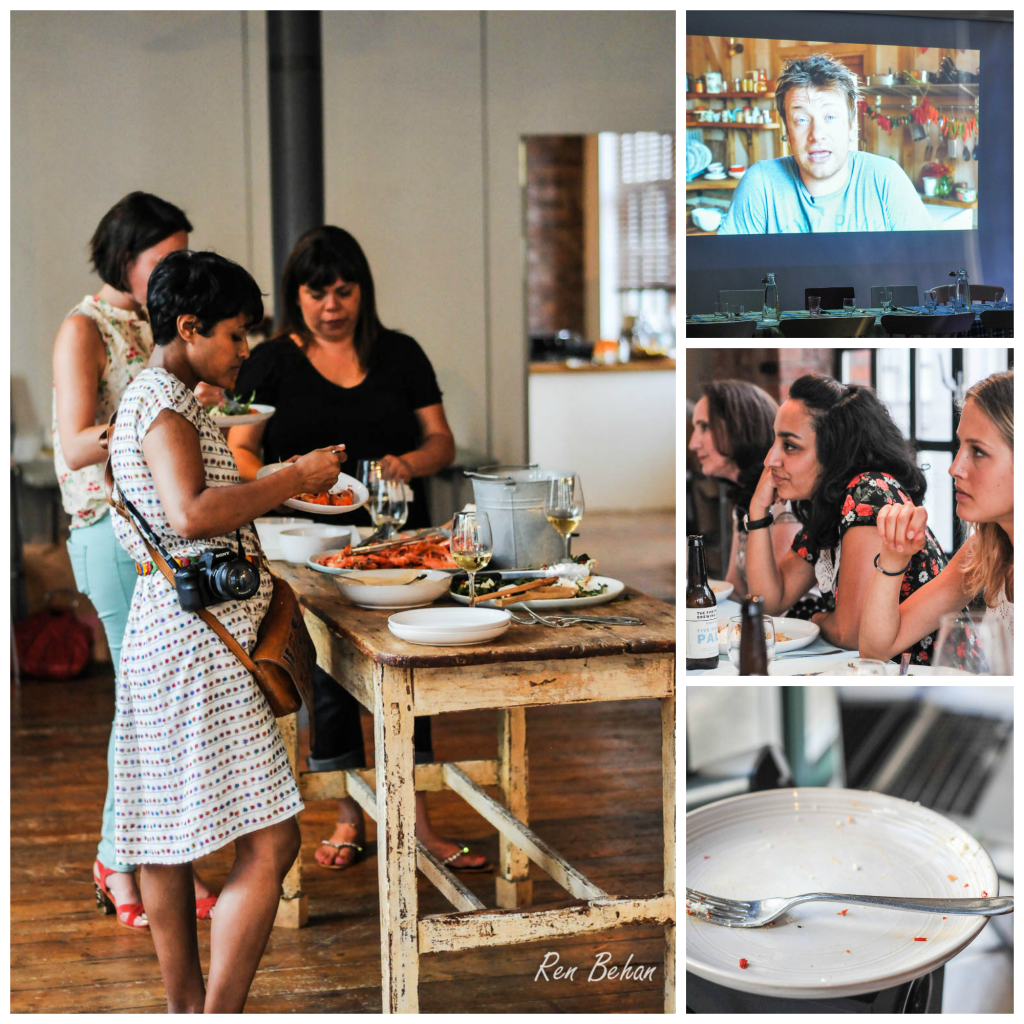 Jamie was very happy to place us into the capable hands of Merlin Jobst, who had bravely taken the lead in organising the evening. I had already met Merlin once before on another sunny day at Food Blogger Connect and it was great to see Jamie’s online Editor Jim Tanfield again, as well as meeting lots of other new and equally friendly faces.

It’s always exciting to get a little peak behind the scenes of where ‘things happen’ – if not a little surreal to be helping ourselves to food from a table perhaps used in a food shoot by David Loftus (a food photographer I adore) or standing by the kitchen counter used by Jamie in some of his video’s and TV shows. I can happily say that we took very well to our new environment for the evening. It was, at times, as though the food paparazzi had descended upon the floor-to ceiling windowed room, as we poked our heads around the corner into the side kitchen to see some of Jamie’s ‘Fifteen’ graduates – zooming in and snapping away at every detail. Luckily, we were surrounded with people who seemed to ‘understand’ us and who didn’t mind our food blogging focused curiosities and appetites. 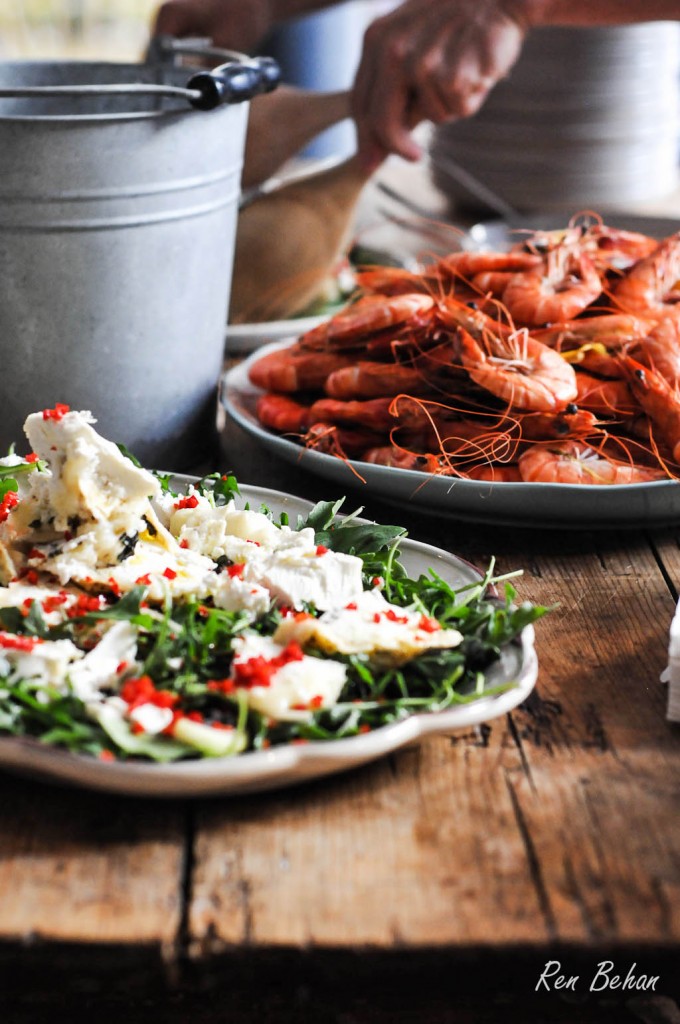 The recipes that we tried throughout the evening were simple recipes that can be found on the JamieOliver.com website. I’d made a couple of them before, but it was nice to try some of the other recipes that were new to me. The starters included a huge plate of sustainable prawns (Jamie’s Pint of prawns recipe with a flavourful Marie Rose sauce) served alongside a tasty Herb salad with goat’s cheese. Both recipes I’d say are really easy crowd-pleasers. I was inspired to pick up some lovely fresh prawns by the Llyn Peninsula just a few days after my visit to Fifteen to make a similar recipe myself.

Whilst nibbling, we were introduced to Jamie’s new head chef Jon Rotheram, who had popped in to see us from the recently refurbished Fifteen restaurant downstairs. Jon demonstrated his recipe for deviled lamb’s kidneys and talked to us about his experience of working as a sous-chef to Fergus Henderson at St John. Whereas Jon had previously faced the challenge of nose-to-tail dining (a concept he’s keen to expand upon at Fifteen) he now faces an altogether different adventure; heading up the team of apprentices from disadvantaged backgrounds at Fifteen – a restaurant from which all the profits continue to be poured into the Jamie Oliver Food Foundation charity. 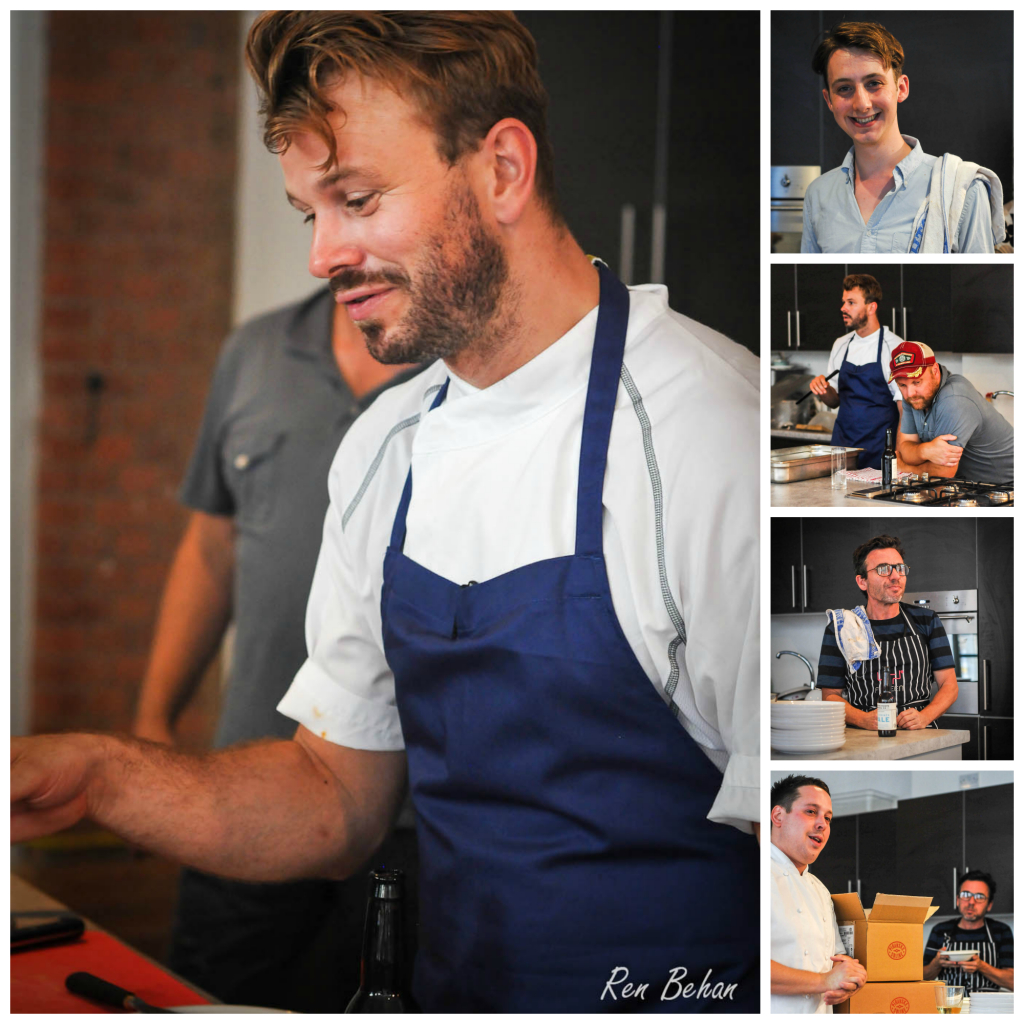 A little later on, we took to devouring some more of Jamie’s recipes – a Keralan veggie curry and a very moreish Southern Indian crab curry, both served with aromatic Lemon rice. I’d made the Keralan curry before (from Jamie’s Fifteen Minute Meals) and even the kids loved it. I whizzed mine a little with a handheld blender so that the veggies were more manageable for the kids. The crab curry was new to me and was probably the stand-out dish of the evening – definitely on the ‘make for friends list’ – along with the cheesecake – more about that later!

The evening was very much a group effort – with Jamie’s online team, including Jim, Merlin and Danny having done much of the prepping and cooking, with help from Jamie’s graduates, Joe, Merci and Tyrone.

Jamie’s former online editor, Danny McCubbin also took the floor and spoke to us about his latest role heading up the San Patrignano UK London association – a ‘not for profit’ organisation providing support and counselling to anyone struggling with drug addictions. The UK branch of this organisation echoes the amazing work done at the original San Patrignano Institute in Rimini, Italy. In fact, the wine we had been drinking that night had mostly been made by the trainees at San Patrignano in Italy, as part of their rehabilitation programme to learn new skills and artisan trades.

We also heard from Joe Gray, a former graduate of Jamie’s Fifteen, who has also been encouraged to spread his wings, starting a catering business of his own and now a second business called Slovely. Joe now imports products from San Patrignano in Italy as well as from Slovenia, including some of the hand harvested, unrefined Slovenian sea salt, or piranske soline that we tasted and were given to take home. You can buy the salt in Selfridges. 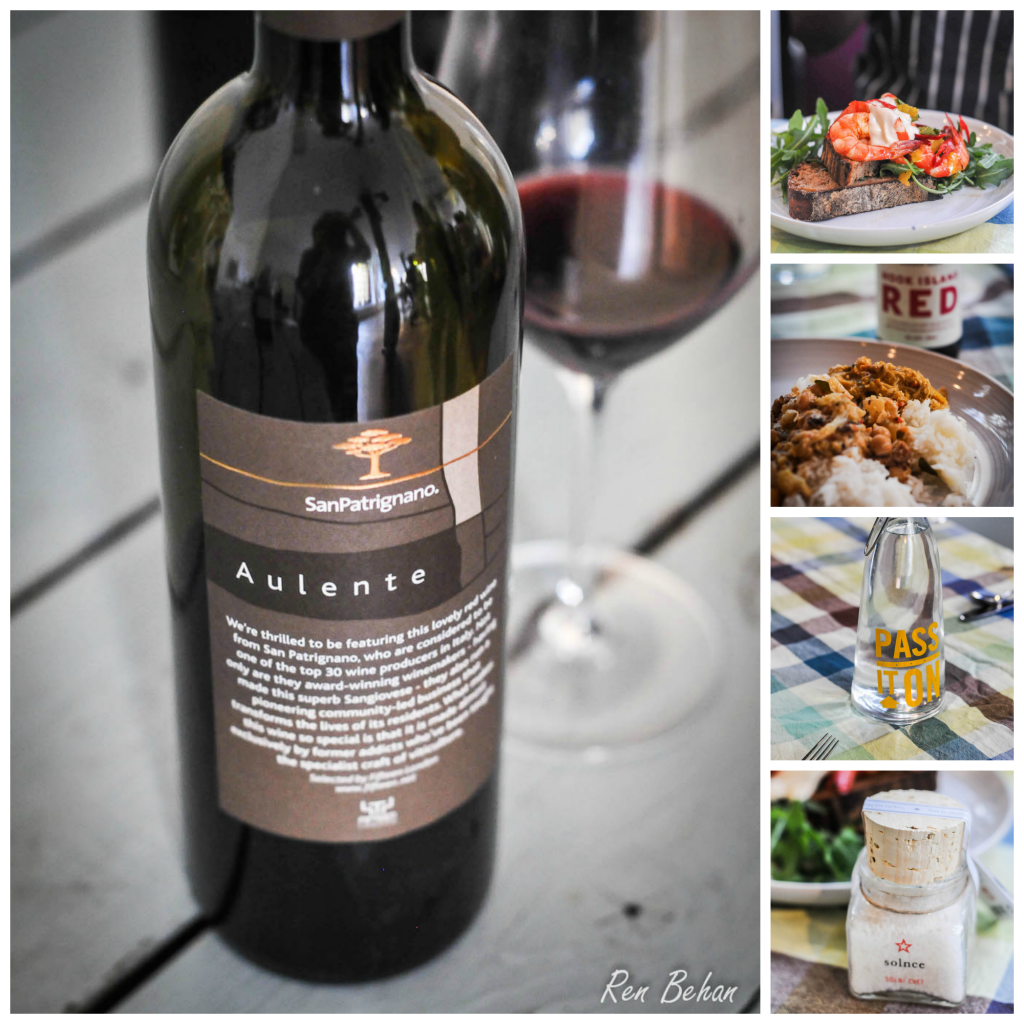 To wrap thing up (well, for the evening upstairs at least – a number of us made it downstairs for a cocktail at Fifteen) we demolished Merlin’s recreation of Jamie’s Bloomin’ easy vanilla cheesecake with a boozy cherry compote. This was such a treat – as you would expect, a smooth cheesecake, with the perfect crumbly base, jazzed up with a cherry compote. I’d actually recommend trying any of Jamie’s cheesecakes – I’ve got my eye on the cherry and chocolate cheesecake recipe, particularly as British cherries are in season now, too. 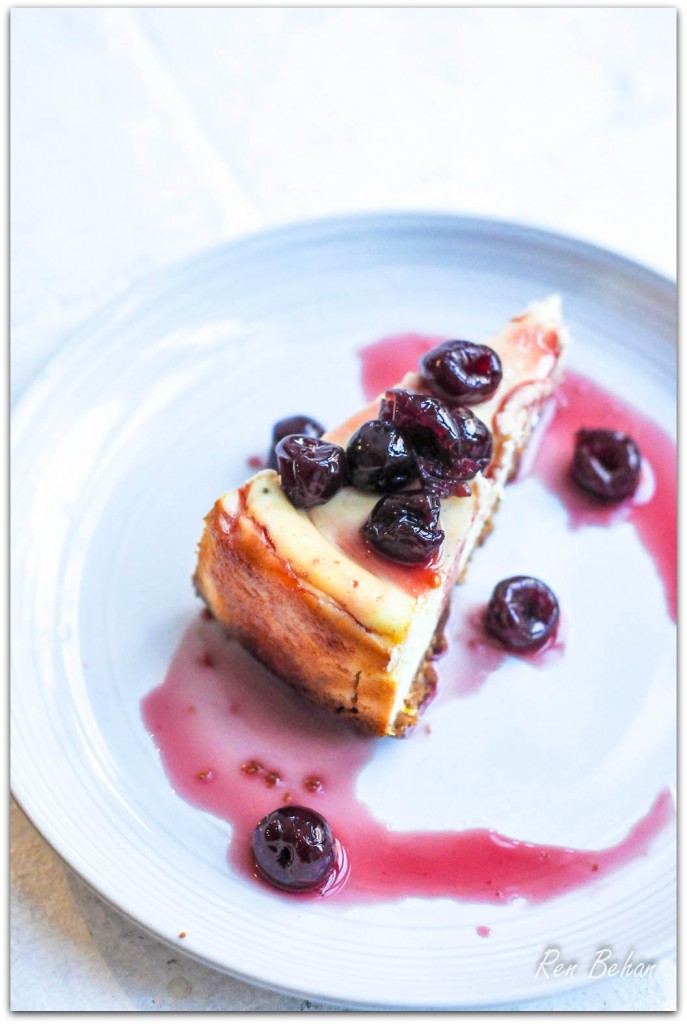 All in all, this was a really enjoyable evening with lots of us making new friends and the JamieOliver.com team showing great keenness to build relationships with food bloggers. I can also recommend the ‘Run n Tings’ cocktail at Fifteen – complete with a striking treacle-rimmed glass!

You can read some other accounts of the evening here –

More to be added…

If you find yourself making any of Jamie’s recipes – whether from his books or online – the editorial team at JamieOliver.com (@JamieOliverCom) are always keen to re-tweet, share and connect with us all so do make sure you say ‘hi!’ and let them know.

With many thanks to Merlin Jobst, Jim Tanfield and the JamieOliver.com editorial team for the invitation to join them for the evening and to Jon Rotheram at Fifteen, Danny, Joe, Merci and Tyrone for their tasty cooking. All thoughts and opinions my own.

Are you a fan of Jamie Oliver’s recipes? Do you have a favourite?