This weekend I’m all set to start cooking from award-winning British food writer Diana Henry’s brand new book Salt, Sugar, Smoke published by the Octopus Publishing Group. I have long been an admirer of Diana’s recipes and food writing and I have been really looking forward to this book since meeting her at her home. 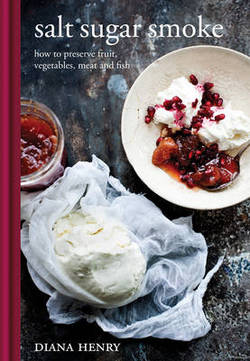 This book arrives at exactly the right time for anyone looking for inspiring ways to start preserving bountiful summer fruits. Beyond fruit and beyond the summer, Diana is our guiding hand for preserving seasonal vegetables, meat and fish, too through smoking, pickling, curing, potting and more.

If you are new to preserving, you will find plenty of information on the essentials of jam-making and chutney-making. You’ll also learn how to make your own sauces, vinegars, cordials and liqueurs, confit and terrines.

You won’t need any expensive equipment, but for a little effort with this book you’ll soon have a larder full of enticing flavours ready for any season.

I’ll be reviewing Diana’s book in full next week. In the meantime, here’s a taster of some of Diana’s recipes from Salt, Sugar, Smoke as featured in Diana’s column in Stella Magazine and a chance to win a copy of your own below, too: