I’ve been a fan of Hotel Chocolat since around 2005, when I first discovered them online following a friend’s recommendation.  Their approach to chocolate was completely different and a welcome change.  Importantly to me, Hotel Chocolat have long flown the flag of commitment towards ethical trading.  I was very pleased when one of their boutique-style shops appeared on my local High Street – especially as they often have a tray of taster chocolates on the counter!

Now I know that I probably shouldn’t be tempting you with chocolate Easter Eggs with still six weeks to go until Easter Sunday, but I like to think of this as preparation!  Since Hotel Chocolat have been kind enough to send me a small parcel, I’d like to whet your appetite with this beauty; it’s The Dark Chocolate Ostrich Egg!

The really good news is that one of my lucky readers will also be sent one in time for Easter! 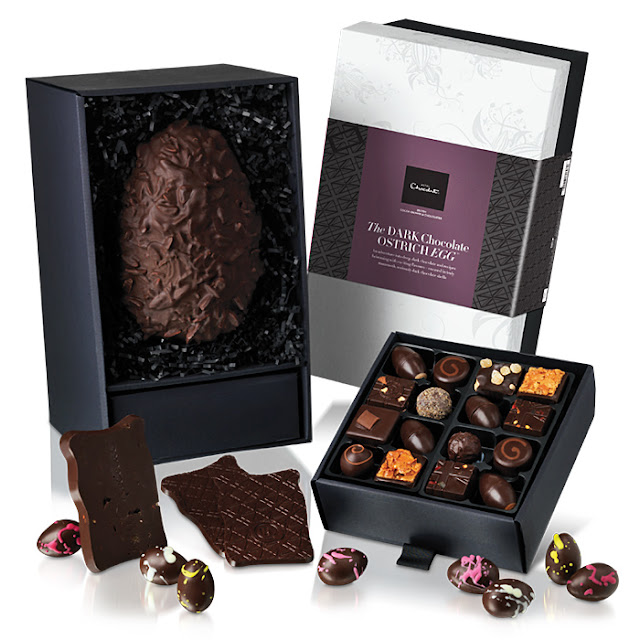 Look good?! The Ostrich-sized egg is made up of two extremely large 70% dark chocolate shells covered first in crunchy almond pieces and then coated in a second layer of chocolate.  It weighs over a kilogram and the shell is so thick that I had to give it a good, satisfying whack with a rolling pin to begin breaking it up!
In case the Ostrich Egg itself doesn’t fill you up over the Easter weekend, Hotel Chocolat also include eight decorated mini-eggs, three mini-slabs of Fruit & Nut and Chilli & Orange dark chocolate, and a tray of over sixteen popular dark chocolates including ‘explode-in-your-mouth’ liquid caramels, a sugar-coated Gianduja and their ‘5-second’ chilli praline.
My favourites from the selection – and I promise I have shared them around! – were the Chilli & Orange slab (a sensational combination!), the texture and flavour of the Ostrich Egg itself and the House Praline, their signature chocolate for good reason.  The boozy dark chocolate mini-eggs are also divine and I’m torn as to whether I love most the Amaretto or the Strawberry Marc de Champagne truffle.
Everything is very well presented.  The foil-wrapped Ostrich Egg arrives tied with a ribbon, ‘nested’ within a large rectangular black box with a crisp white lid.  The egg sits next to a compartment containing the separate box of chocolates, mini-eggs and slabs.  It is very tastefully done.
The Dark Chocolate Ostrich Egg is a true showstopper.  Extravagant: yes. Over-the-top: yes.  Deeply pleasurable: yes.  It would make a striking centrepiece for an Easter table gathering, a grand gift for the one you love or if you have, at any point in the year, been ‘in the dog house’ of a chocoholic, this is the Egg to go out and buy to make things all better.
The Giveaway:
Hotel Chocolat are going to send one of these beauties to a lucky reader.  The Dark Chocolate Ostrich Egg is worth £65.00 and is their most luxurious egg of the season.  It could be yours.  You could be as happy as I am now sampling it!
THIS GIVEAWAY IS NOW CLOSED – THE WINNER WILL BE ANNOUNCED ON MONDAY 28TH MARCH 2011
Good Luck!