All I want for Christmas is…a copy of delicious. January 2013!  I know it’s not particularly humble or ladylike to shout from the rooftops about personal achievements, but I am so proud to share this with you. If you flick through a copy of the latest edition of delicious. out now – it is the January 2013 edition with a sublime red velvet cake on the cover – you may well spot a familiar face or two inside. I was asked by the very talented Persian food writer and supper club host, Sabrina Ghayour, if I’d like to take part in a feature and bring with me a Polish recipe. The idea for the party was that we’d each bring an individual dish, inspired by our heritage, to share. The result was an afternoon filled with great merriment, friends and cheer!

It was such a brilliant experience to be able to take part in such a fun-filled shoot, with the delicious. magazine team, including food editor Lizzie Kamenetzky, as well as the hugely talented photograher Dan Jones. I was able to see first-hand how a feature comes together, from making the food, to styling it, photographing it and yes, eating it!  It must have been like herding cats, as those of us who took part in the shoot were highly excitable particularly as we were being served some of the most wonderful cocktails by Michael Stringer from Hire the Barman.

Added to the champagne and dark chocolate and espresso martinis we were able to dip into a wonderful selection of food, as part of a menu described by Editor Karen Barns as, ‘ flamboyantly eclectic.’  Dishes and recipes within the feature include Prawn and water chestnut dumplings from China made by Ning Ma, Parsnip, celeriac, pea and potato samosas from India made by Asma Khan, an Artichoke, jamón and pine nut salad from Spain made by Chuse Valero, Stuffed chicory from Italy made by Emanuele Barrosso, Spiced lamb with chickpeas, orange zest and black garlic from Iran made by Sabrina and my very own Potato pancakes from Poland.

Dessert really was the pièce de résistance, as brilliant French baker Bruno Breillet had contributed his Salted caramel and cream cheese apple parcels. Let me tell you, they must definitely feature on your New Year’s Eve pudding list! 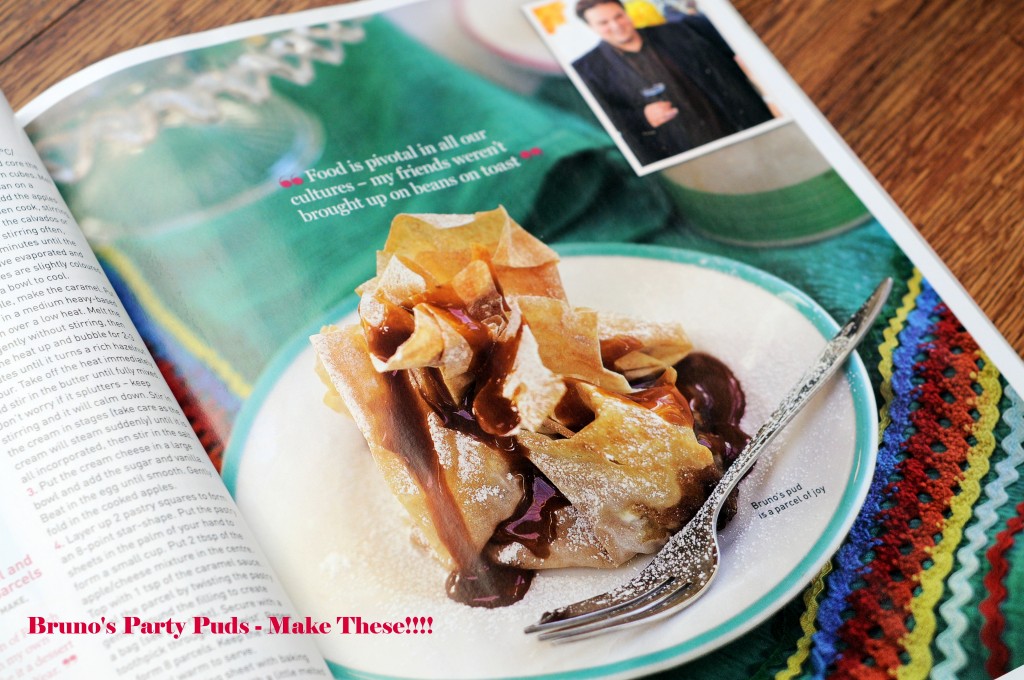 Aside from our very lovely feature, the January 2013 edition is packed full of recipes I can’t wait to try. To begin with, I’l be trying some of Trine Hahnemann’s Scandinavian treats. On the page before our feature you will find Diana Henry’s Beetroot-cured gavadlax. Having already made that for my sister’s 50th birthday party, I can assure you, it’s a real showstopper. The Frosted red velvet layer cake on the cover and on page 74 is a festive must-try, too.

I was really delighted to have been part of this feature. Delicious. magazine had previously featured my mum’s Polish Pierogi with Blueberries and Whipped Cream over the summer. Watch this space for more Polish food related news to come.

I do hope you pick up a copy, if you are not already a subscriber. If not, add a subscription to your Christmas list, pronto!

With many thanks to Sabrina Ghayour, Dan Jones and to the delicious. magazine team for putting together such a fun feature.

So, who is coming to the party next time, and what are you bringing?!