Whether or not we buy organic food seems to be a question capable of sparking huge debate. We know that organic food is better for us, but can we justify buying organic food when shopping bills are rising sharply? Is it a luxury to buy organic? Are most of us buying basics ranges? If we buy locally produced food is this the same as buying organic?

Looking at my own shopping habits, if I’m honest, you will probably find some organic produce, but it won’t be all organic produce. I am more likely to buy organic meat, because when I buy meat I’m keen to ensure quality and animal welfare. I also buy organic free-range eggs and organic milk, almost always and certainly in the case of whole milk for my children. I try as often as possible to shop at the farmers’ market or farm shop, and so by default, the fact that I’m able to source local produce in season probably means that I am getting organic produce, plus buying food in season is cheaper than buying the same produce out of season. I do not grown my own food, yet! I do have a very large apple tree in my back garden planted during the ‘Dig for Victory’ campaign during the war and I am keen to start growing my own produce this year.

The folks at Why I Love Organic are obviously keen to push the reasons they believe we should buy organic that little bit further. They have a captive audience as many of us are becomming more conscious of what we put in our shopping trolleys and are developing a greater need to know where our food has come from. To help them spread the message, they have enlisted a whole host of celebrities to endorse the campaign, including Raymond Blanc, Lorraine Pascale, Matt Tebutt and Jody Scheckter, as well as other staunch supporters of the organic movement. Many of them have shared their recipes using their favourite organic accessible goods/produce in the Discover Organic cook book.

Here are the main reasons to buy organic and to support the organic movement:

(Source:  Why I Love Organic Campaign)

“Until the dawn of the twentieth century, all food is organic – there is no other way! But then comes the invention and increasing use of synthetic nitrogen fertilizers and pesticides. Some farms resist these developments – the original organic pioneers.” 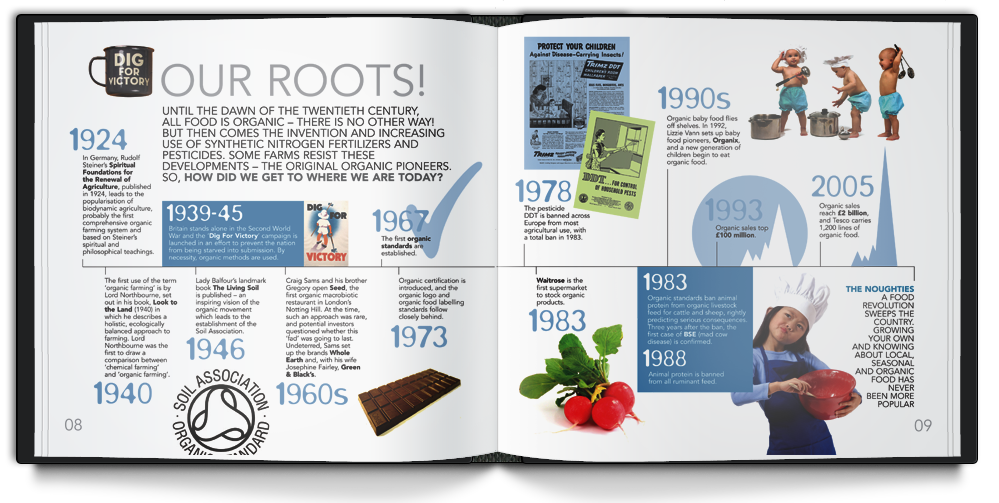 In 1924, in Germany, Rudolf Steiner’s Spiritual Foundations for the Renewal of Agriculture in published. His theories introduce the first comprehensive organic farming system based on his spiritual and philosophical teachings.

During the war, 1939-1945 the “Dig for Victory Campaign” is launched in an effort to prevent the nation from starving. By necessity, organic methods are used.

In 1967, the first organic standards are established.

In 1973, organic certification is introduced.

In 1983, Waitrose become the first supermarket to stock organic products.

Today – a ‘food revolution’ sweeps the country. Growing your own and knowing about local, seasonal, organic food has never been more popular.

So here we are today and we seem to have the (organic) chicken and egg syndrome. Organic food can be more expensive (not always, I would add) and with a rising population and rising costs there is a greater demand for plentiful and cheap food.  But, if we support organic farmers and small producers, particularly local producers and make better food purchases, we are more likely to see the cost of organic food production go down…

The cook book is divided into different sections.

Firstly, an Organic timeline (above) and a Seasonal timeline (below) followed by Meat cuts (suggestions for every mood and occassion) and Conversion charts (know your kilos from your pounds). 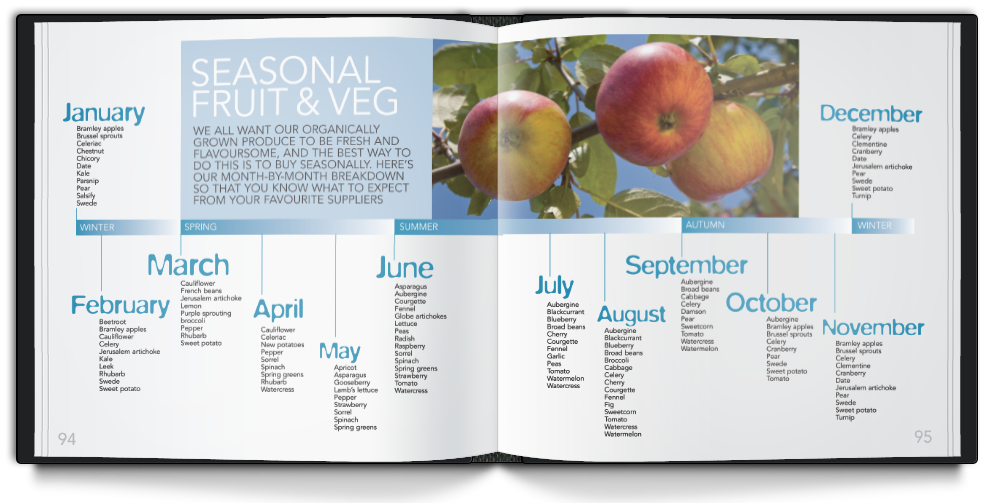 Next, recipes from organic supporters such as Kate Humble, Raymond Blanc, Anthea Turner, Jody Scheckter (former racing driver and founder of Laverstoke Park Farm) and more followed by a selection of recipes for Spring, Summer, Autumn and Winter.  The recipes are as varied as the produce showcased in the book. For me, a cook book compiled from recipes taken from a number of people can sometimes lack cohesion or an overall feel of togetherness, but since I love using seasonal produce there are plenty of recipes in here to tempt me and the recipes that I have cooked, we have enjoyed eating as a family. The book obviously highlights organic produce, for example, suggesting organic tofu, organic natural yoghurt, organic chocolate but it doesn’t go far as to stipulating that every single ingredient in each recipe must be organic. I like this, but where do you draw the line? Shouldn’t we also be buying organic flour, organic sugar and organic herbs?

Essentially, this is a recipe book showcasing British seasonal produce and suggesting that by using organic produce your food will taste better and you will be doing some good. Some people may find this preachy and elitist, others may enjoy referring to a cook book with a solid organic ethos but a varied cooking style.  I did find that the index isn’t particularly comprehensive – for example, curiously the Buffalo Mince Bolognese highlighted here isn’t found in the index at the back of the book… 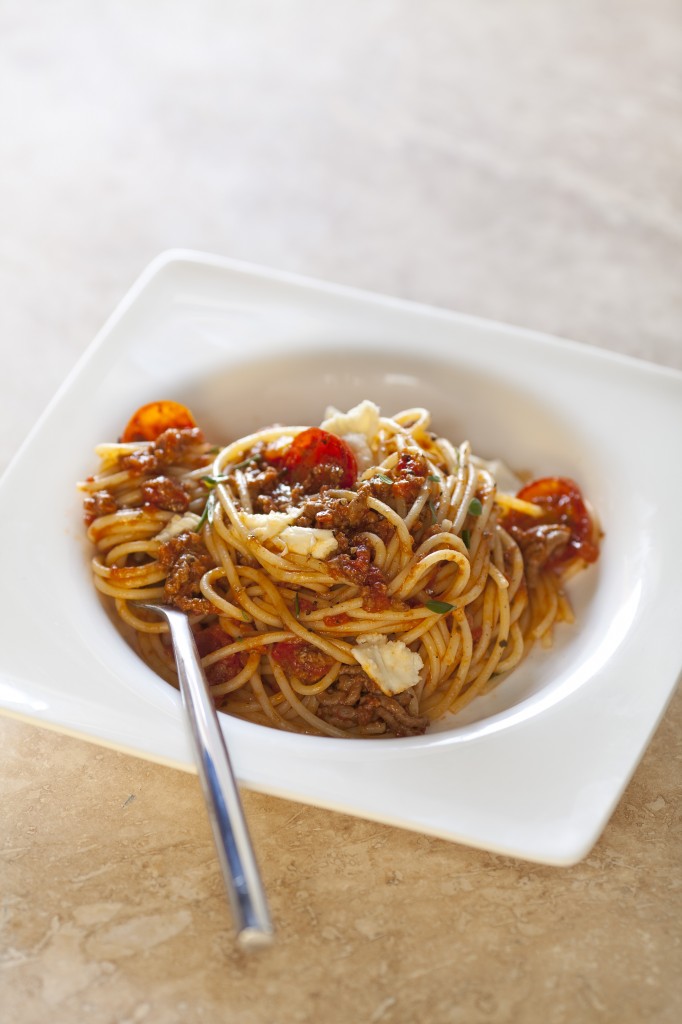 My favourite recipes are:

Roasted Carrot and Hummus Dip (above) – easy to make, great for the kids, lovely flavour

Buffalo Bolognese with Buffalo Mozarella (below) – I make this every week, with my own tweaks. Buffalo mince is organic and has less than 3% fat

Toffee Apple Yogurt Cake (recipe and photo below) – a lovely moist cake made with organic toffee yoghurt, perfect for a teatime treat 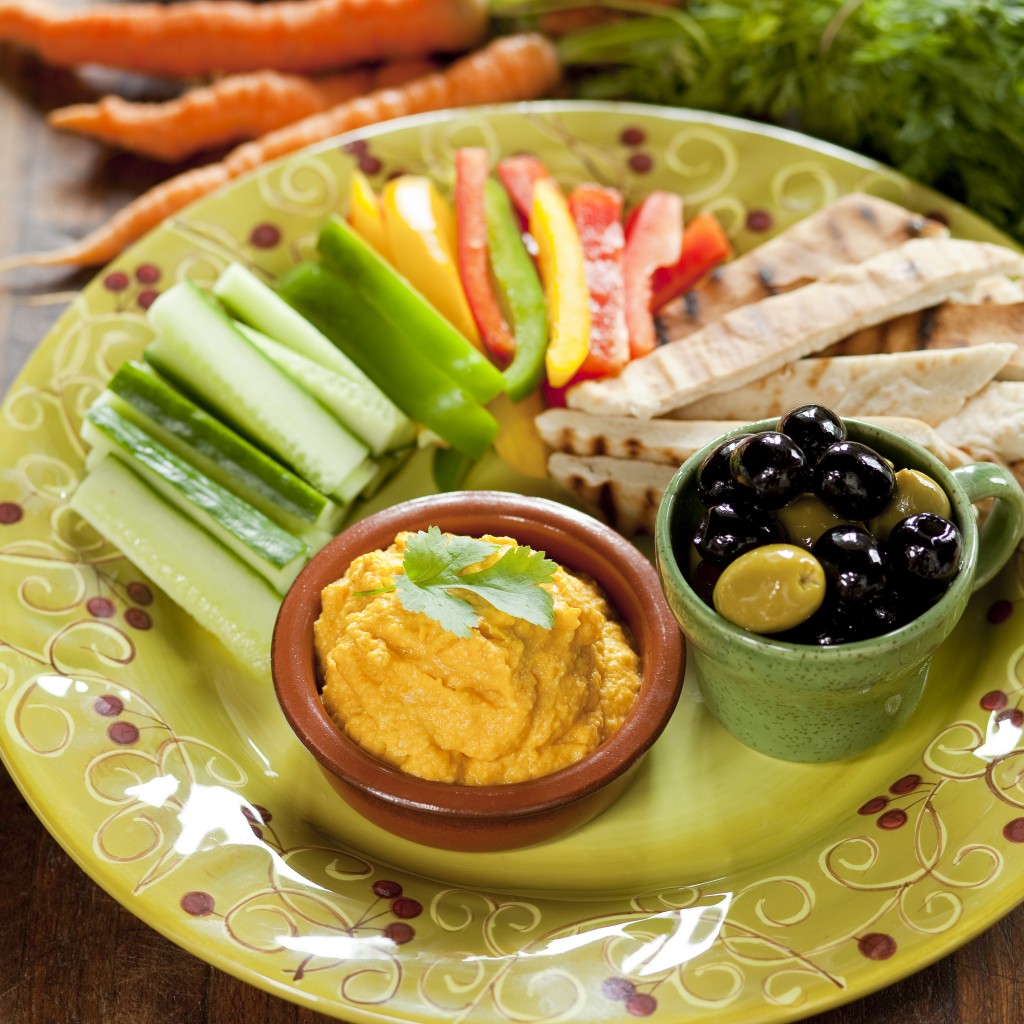 To find out more –

Look out for the Discover Organic cook book in Waitrose (RRP £14.99)

If you are a food blogger, you can also enter the Fabulicious Food! Simple and in Season blog event this month to win a copy of the book.

Posted with kind permission of Haygarth

175 g golden caster sugar, plus a little extra for sprinkling on top

1 Cox’s apple, cored and diced (I used Bramley’s from my garden)

TIP: If toffee yogurt’s not your thing, try using organic Greek-style yogurt with honey or natural yogurt with vanilla. 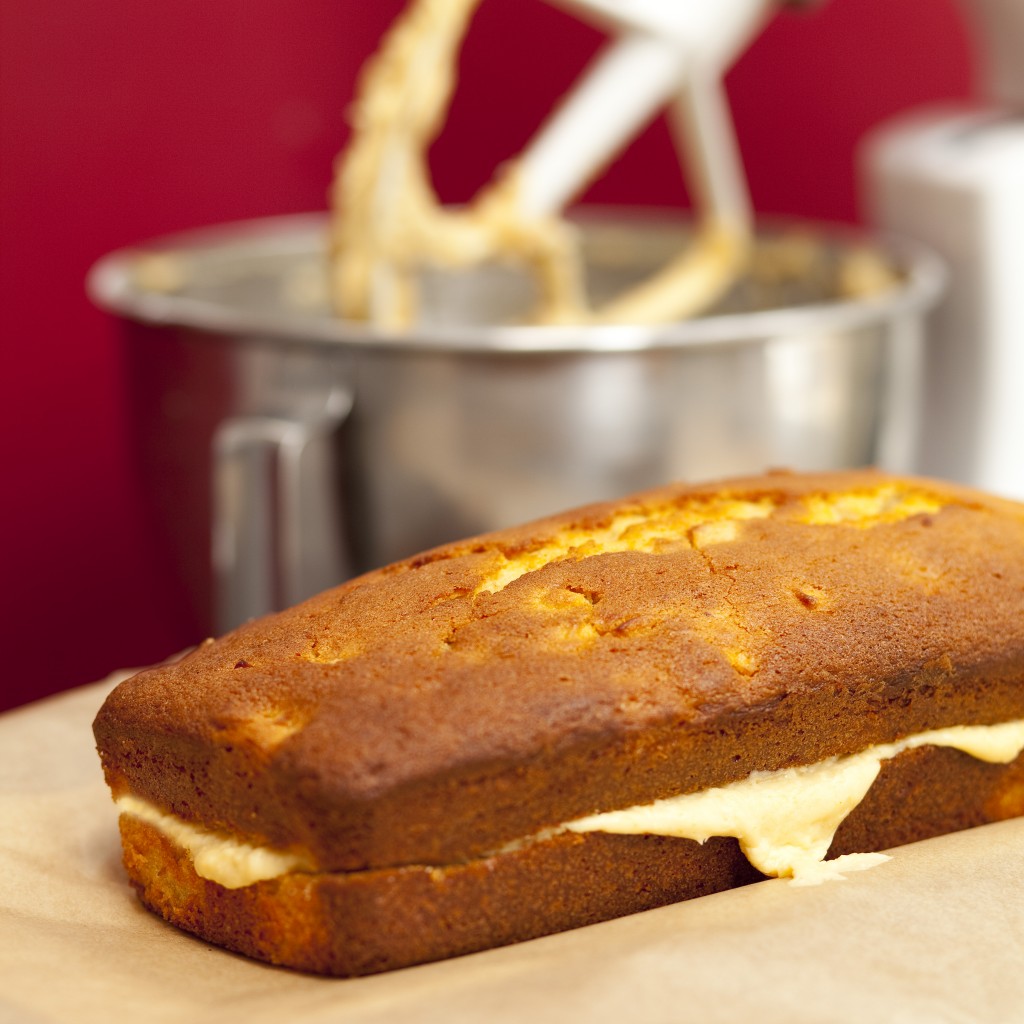 So, do you buy organic, if so what proportion of your shopping involves organic food? Are you a huge supporter of the movement? Do you grown your own?! Is buying organic now the norm or is it still considered to be a more luxurious way to shop? I’d love to know your thoughts.

With many thanks to Haygarth for sending me a copy of Discover Organic for review and for the images shown in this post.