Yesterday saw Luton celebrating Britain’s biggest one-day carnival as thousands of people took to the streets to celebrate diversity and culture. As Poles make up a large part of the community across Herts, Beds and Bucks, I was invited back to BBC Three Counties Radio to talk to Toby Friedner about Polish celebratory food and culture.

It was a lovely opportunity to be able to reminisce about my own Polish foodie upbringing and to highlight some of my favourite Polish dishes, such as pierogi (filled dumplings) bigos (a Hunter’s stew made with sauerkraut, Polish sausage and mixed meats) and traditional Polish desserts such as Makowiec (poppy seed cake) and Nalesniki (pancakes filled with sweet cheese). I took along some Polish beer for Toby to try, a traditional Sałata Jarzynowa (mixed vegetable salad) some open sandwiches and a couple of Pączki (Polish doughnuts with jam) for good measure. 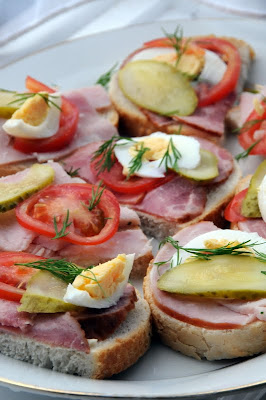 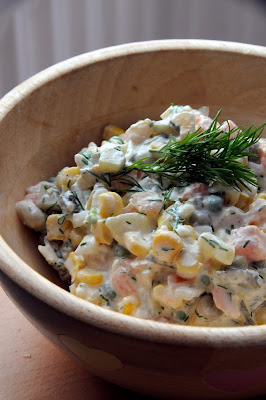 I was able to point Toby to some of the Polish recipes I have tried and shared on here, such as my mama’s Polish Apple Cake which makes a great teatime treat, ‘Kluski Lane’ or Poured Noodles or the delicious Apple Pancakes.
Though it rained towards the end of the day, I’m sure the Polish crowd in Luton celebrated in style, showcasing their carnival costumes depicting the legends and fairy tales of Poland. Thank you so much to Toby for having me as his guest and to Niki for arranging it in advance. To listen, you can click on this BBC Three Counties Link (iplayer) and catch me talking to Toby from around 1:37 onwards.
If you enjoy listening about food on the radio don’t forget to tune in weekly to Nick Coffer’s Weekend Kitchen  – a fun dinner party on the radio with three rotating guests, usually a chef, a home cook and a wine expert.  You can also listen out for me during the show (usually around 12.30pm) highlighting a great seasonal product every week for you to keep a look out for and try, such as British asparagus, seasonal strawberries or new season’s lamb.
Speaking (or writing) of Polish food, this week I received a newly published book called Rose Petal Jam – Stories and Recipes from a Summer in Poland

written by Beata Zatorska & Simon Target which offers a collection of recipes gathered from across Poland intertwined with stunning photography depicting the Polish landscape and history. After 20 years away from home, Beata, a doctor in Sydney, returns to Poland with her English husband Simon, to spend the summer recreating her grandmother’s recipes and exploring the country. This is a book I will certainly be referring to often and I look forward to trying some of the recipes in the book as well as collecting more of my own from home.

Favourites in the book (written in English with UK friendly weights and measurments) so far are the Roast Duck with Apples, Cabbage Rolls, Pork with Caraway and Onion, salads, soups and desserts such as Rose Petal Jam filled doughnuts, the Makowiec cake mentioned above and a traditional Miodownik, a Honey cake with Plum jam – delicious! If you like Polish or Eastern European food I would highly recommend this beautiful book!

I hope everyone enjoyed their bank holiday weekend. The radio chat was a lovely way to round off a very relaxing weekend for me, having spent the first part of ours visiting friends and seeking out delicious cream teas in Devon.

Look out this week to a round-up of the first installment of Simple and in Season – thank you so much to everyone who took the time to enter and link-up!