A quick burst of Simple and in Season to hopefully get your snowed-in taste buds rocking and rolling! Karen at Lavender and Lovage very kindly hosted an extra-long round of Simple and in Season for December which ran up until 15th January. We had a feeling the New Year would be busy, and we were right!  There were lots of lovely festive and seasonal entries and you can find Karen’s round-up here. Many thanks to Karen for hosting an extra-long round and to all who entered! 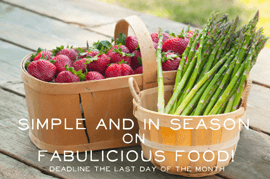 So that we don’t feel deprived, I’m opening up a short ‘end of January’ round, you’ve got about ten days to link up your seasonal treats!

Following that, we have two brand new hosts for February and March

Upcoming Simple and in Season hosts

February’s Simple and in Season host will be Caroline at Cakes, Crumbs and Cooking

I’ll leave you to get your seasonal thinking caps on – wherever you may be in the world!

You can find the link up below