Spring has sprung and what better way to celebrate than to be invited to Jamie Oliver’s restaurant Fifteen in London to sample a seasonal menu based around a very intriguing artisan cheddar experiment. It’s not every day that such an invitation comes along; particularly as the ‘experiment’ in question involved 1 kilogram of Italian white truffles, valued at around £3-£4,000 per kilo. The truffles had been given, some eighteen months earlier, to Jamie Oliver who passed them onto his friend Tom Calver at Westcombe Dairy in Somerset, whom Jamie describes as being one of “the best known cheese makers on this planet!” Tom’s challenge was to use the white truffles to make Westcombe Truffle Cheddar, based upon the hand-crafted cheese-making methods used by the Calver family over on Westcombe Farm. Jamie hailed the truffle-cheddar marriage as “a fantastically bonkers experiment” and extended the challenge to Fifteen’s executive chef Jon Rotheram and his team, to create a glorious Westcombe Truffle Cheddar tasting menu. 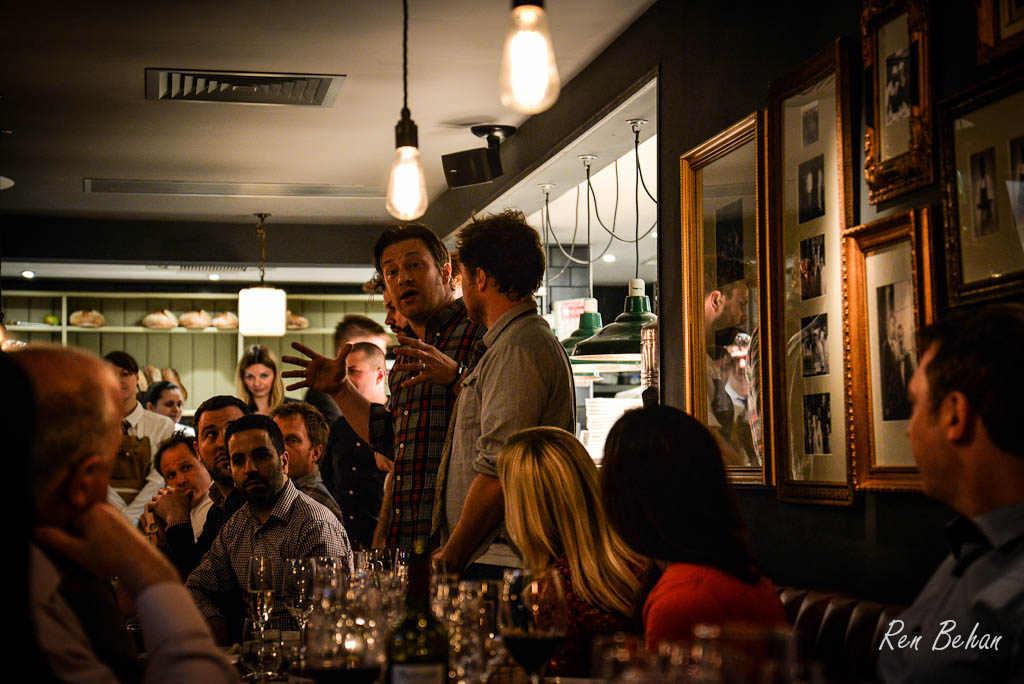 The menu itself showcased both the very best of British seasonal and artisanal produce, alongside the brand new truffle cheese, whilst raising money for the Jamie Oliver Food Foundation which also supports young trainees through the Fifteen Apprentice Programme. We were also served an impressive selection of British, Italian, French and Spanish wines. The tables were set, the lights were dimmed, Jamie introduced the evening and welcomed his guests and Tom told us about the cheese. Out came the courses (officially seven) on the tasting menu, although we were also treated to some additional truffle cheese tastings and some sweet chocolate truffles at the end of the meal. The only downside for me? At eight month’s pregnant I couldn’t sample any of the wines – though I did relish every mouthful of the accompanying truffle tasting menu!

To start, we tucked into cured meats from Cobble Lane, matched with a British wine; Nyetimber Classic Cuvee, 2009, made in West Sussex. The cured meats were also British made, in London, by Matt, Mat and Adam and they’d easily rival anything made elsewhere in the world. Next, my favourite course of the evening, featuring Wye Valley asparagus with a light and tasty mushroom mayonnaise and Westcombe Truffle Cheddar. This course was served with an Italian wine; Filipi Soave ‘Castelcerine’ (2012) from Veneto. The truffle cheddar, asparagus and a Venetian Soave made an exquisite trio. I adore Venetian wine having sampled much of it on a trip there last year, so I happily tapped into those memories whilst sipping my water.

Midway through the evening, we were served a slow cooked Roscoff onion, with almonds, nettles and smoked Westcombe Truffle Cheddar, whilst Jamie, Tom and Jon did the rounds and chatted to their guests. A little French wine was served with this; a Maison Deux-Montille Pouilly-Fuisse ‘En Vergission’ (2008) from Burgundy. This was also my first taste of British nettles this season – both whole and in a pureed form. Get out and grab them while you can! My grandmother always told me that she survived the war by making nettle soup, with just a handful of nettles and one potato.

More British seasonality, this time in the form of wild garlic, with sweet and sour Westcombe Truffle Cheddar, served with with ‘gnudi’ – a delicate type of gnocchi made with ricotta and flour. This course was accompanied by an Italian wine; Castello di Cigognola Barbera ‘1212’ (2011) from the Lombardy region that I’ve yet to visit.

Another highlight arrived next – grilled veal, with a Welsh truffle rarebit toast. Head Chef Jon had said earlier on that he would have happily eaten the Westcombe truffle cheddar as a Welsh rarebit alongside a good British beer – but that he thought Jamie’s guests would be expecting something a little more elaborate. The rarebit was indeed, very good. Interestingly, the veal was served with a red wine; an Aster Crianza Robera del Duero (2008) from Spain. Lots of guests asked for re-fills of this wine, so I take it from their requests that it was particularly smooth and drinkable. My partner-in-crime, Katie from Feeding Boys certainly told me so!

Just as we were getting full, along came an explosion of freshness, colour and flavour from a blood orange sorbet with a mint granita – definitely now on my ‘must make at home list’- I’d probably try something along the lines of this Lemon, lime and peppermint sorbet, substituting the lemon and lime for fresh blood orange juice. 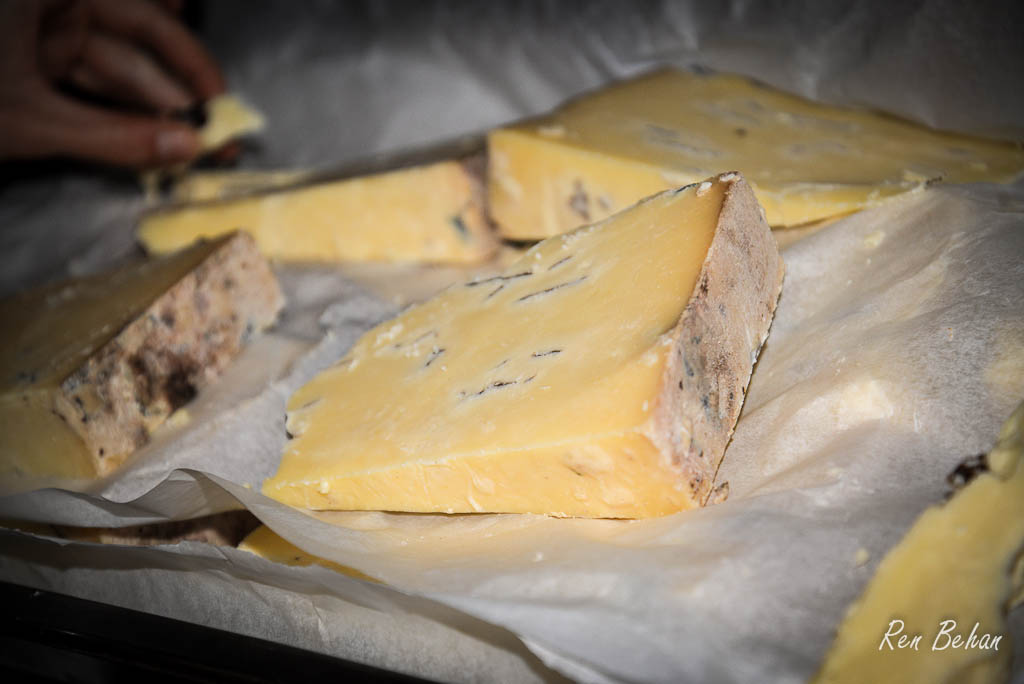 Towards the end of the evening, now extremely well fed, we sampled some more of the Westcombe truffle cheddar, this time served with thin and crispy oatmeal biscuit and Isle of Bulk Honeycomb. Again, this took me back to eating and drinking in a small cantina in a small village in the north of Italy where cheese, cured meats and honey along with a good bottle of red wine were pretty much all that the locals needed in life. At Fifteen, this course was served with an Italian dessert wine; Pieropan Recioto di Soave ‘Le Colombare’ (2009), also from Veneto.

All in all, this was a truly enjoyable evening; the white truffles had a very intriguing effect on the cheese, breaking it down and giving it a really lovely texture. The flavour wasn’t too overwhelming and was matched perfectly with a menu bursting with seasonality; in keeping with the daily-changing and creative menu at Fifteen. 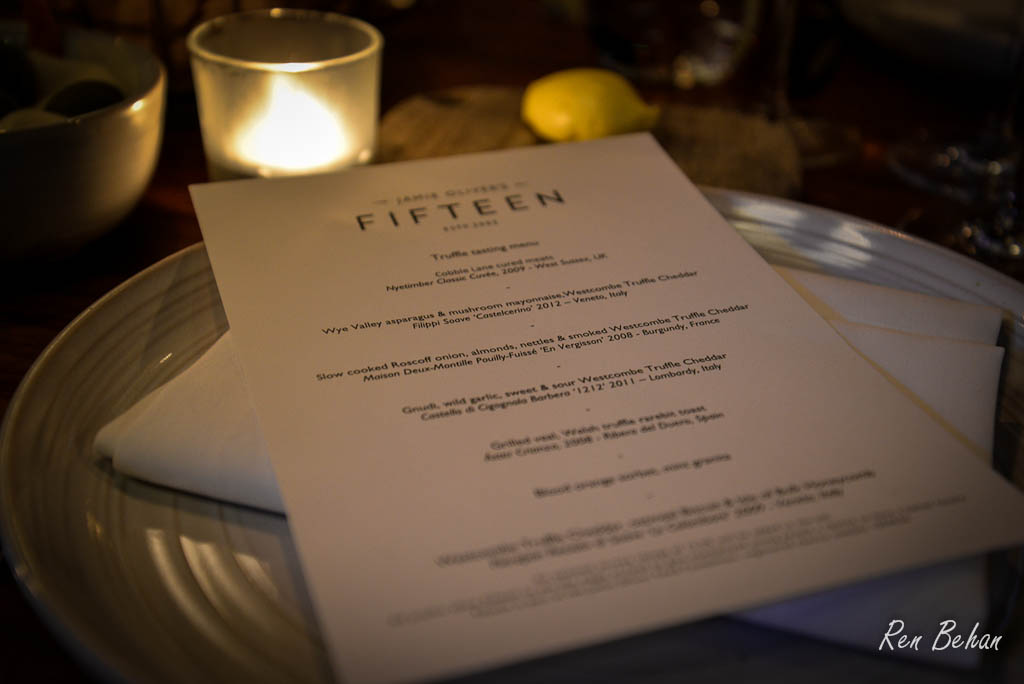 For more of a glimpse of the evening in photo form (I must learn how to use my camera in low-light settings!) pop over to read Matthew’s account over on The List.

With thanks to the editorial team at JamieOliver.com for the kind invitation to this event.