I had an idea, to make some homemade Mother’s Day chocolates, which seemed much less messy in my head (although the photos conveniently don’t show the trail of chocolate all over the worktops) to make some chocolate blobs and decorate them. They seemed to work and my three year old enjoyed adding sprinkles and marshmallows, almost as much as she enjoyed licking her fingers and eating the bits as we went along. Still, now we have two boxes of lovely homemade chocolate puddles and lollipops that they children can give to my mummy and to my mother-in-law on Sunday. I got the cook’s treat of eating as I went along, too… 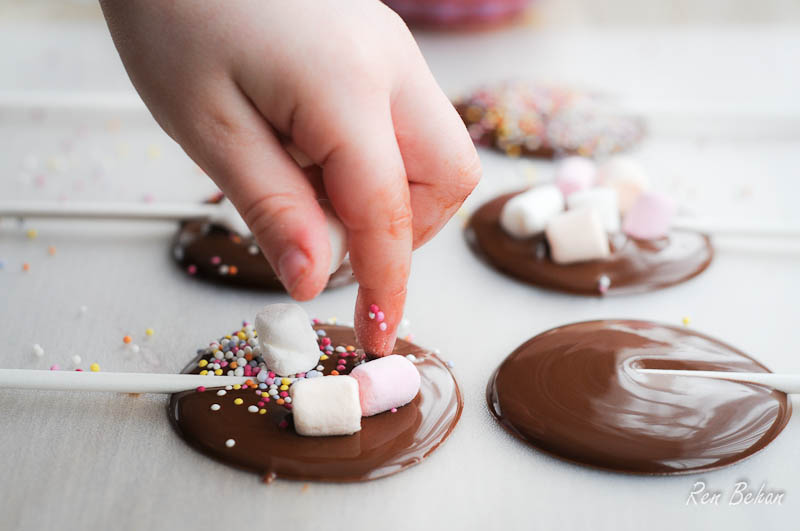 These really are as straightforward as melting some good quality chocolate in a bowl over a gently simmering heatproof bowl of water. Make sure the water doesn’t touch the bowl. I used a pyrex glass bowl and added 200g milk chocolate buttons along with 100g Fairtrade dark chocolate.  You don’t need to go to the bother of tempering, since the chocolate blobs will be covered with sprinkles and sweets so a glossy finish isn’t particularly important. The chocolate barely needs any heat at all to melt, so make sure the water isn’t boiling too rapidly and resist the temptation of stirring it too much.

Once your chocolate has melted, leave it to cool for a little bit. Take a flat surface or a board and lay some clingfilm or another thin board on top. The whole thing will need to fit in your fridge, so make some space in there too.

You can either pour the melted chocolate into a piping bag or just use a teaspoon and carefully pour little blobs, or puddles of chocolate onto the clingfilm or board. It will be quite runny. If you are using a piping bag, just snip a little hole. I tried both piping bag and then pouring the chocolate from a spoon on a second batch and got similar results. The spoon is probably a little less messy. 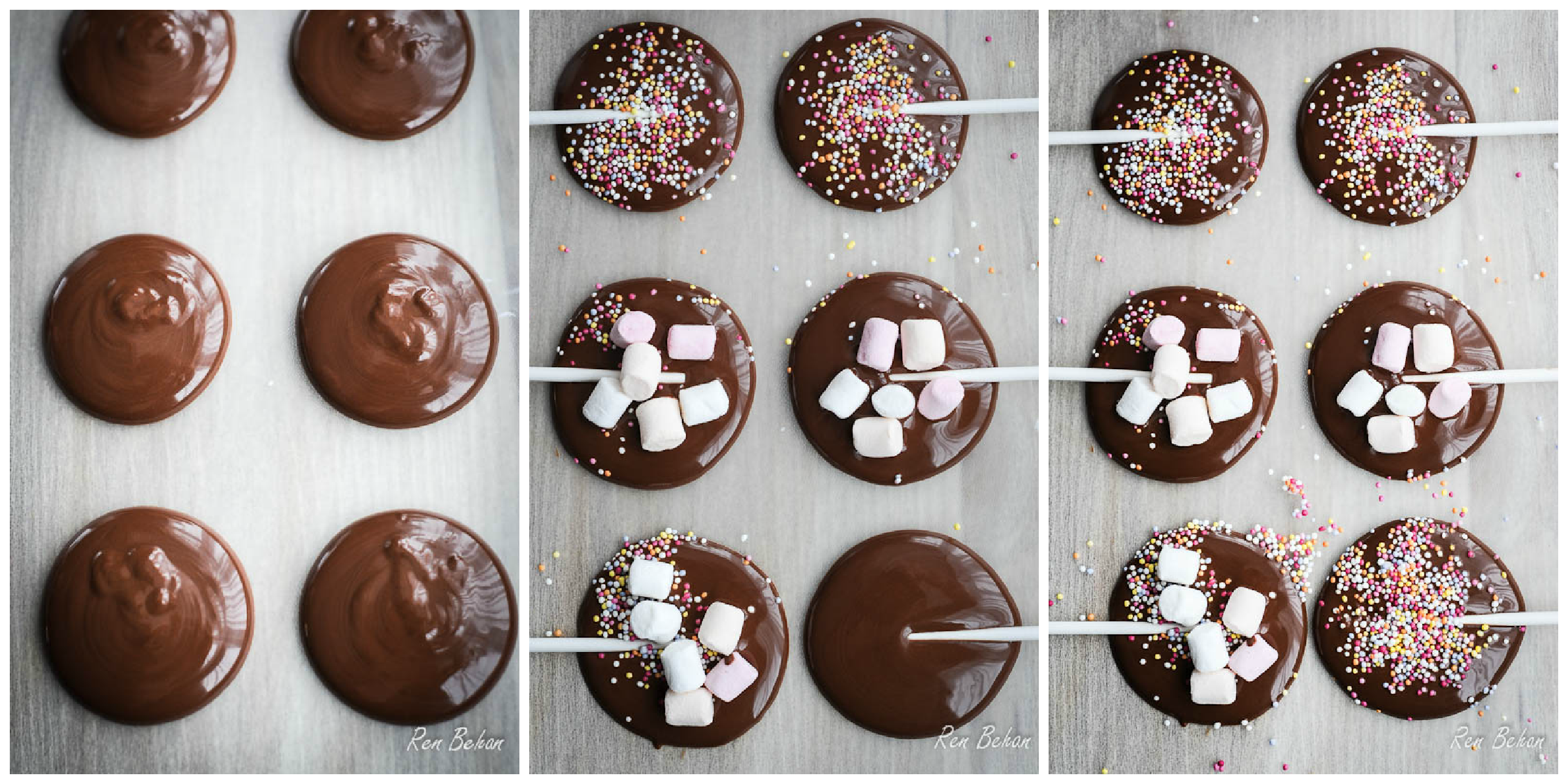 Once you have some blobs or puddles on a flat surface, lay a lollipop stick onto each one. I found some at Lakeland, if you can’t find any sticks you can just make chocolate coins or puddles.

Then carefully place the whole board into the fridge to set for around twenty minutes. Once set properly, your lollopops should lift off easily. If you’ve used clingfilm, you can just peel them off. 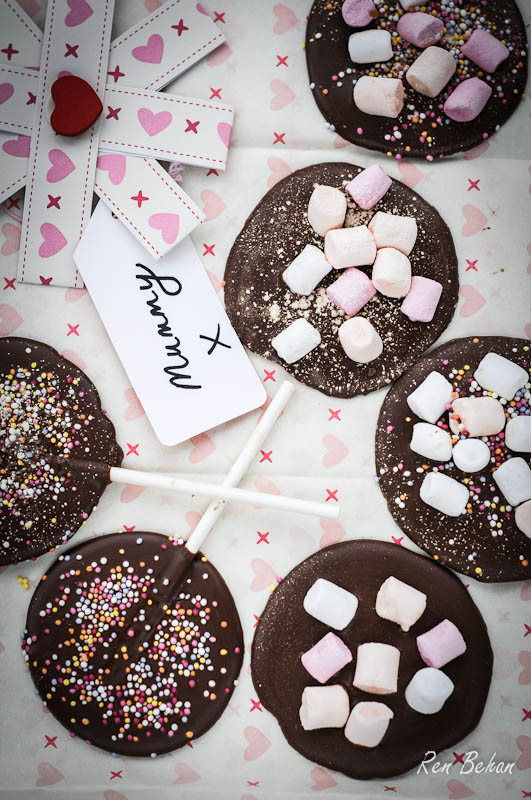 Pop them in a box lined with some tissue paper and then keep them in the fridge if you can until you are ready to give them to your mummy on Mother’s Day! 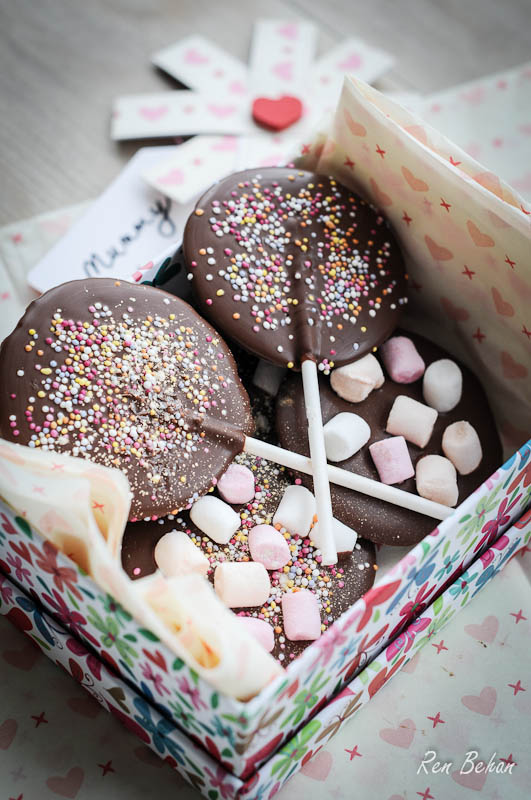 Here are some other simple ideas you can make at home – 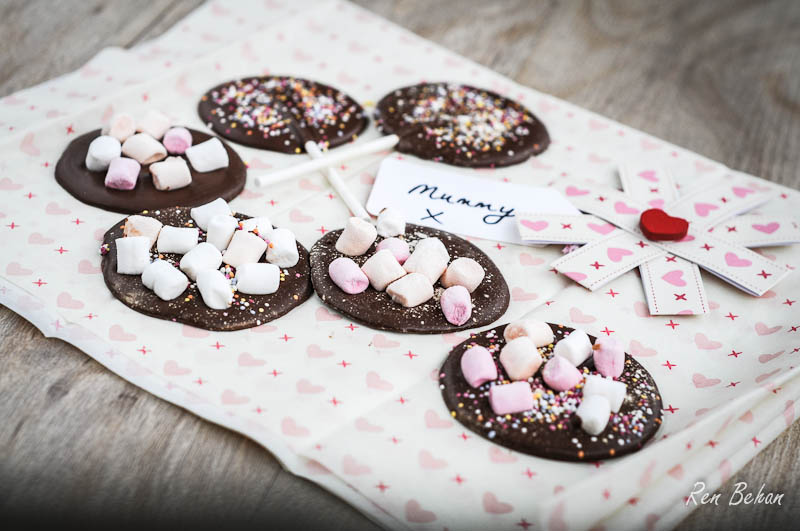 Have you made any edible gifts for Mother’s Day? Let me know in the comment box below and I’ll pop over and take a look.