Knowing where our food comes from is the hot topic of the moment. Processed foods have never been more out, whilst good quality, origin-specific foods are in. This is a shift in thinking that I welcome 100%. I’d like to be more aware of where our food comes from. I’d like to better understand the supply chain. I’d like to be able to eat the best quality food that I can afford and to know exactly what I am feeding my family. I’d also like to support the artisan, not the illegal horsemeat trader, within the remit of our existing family budget. 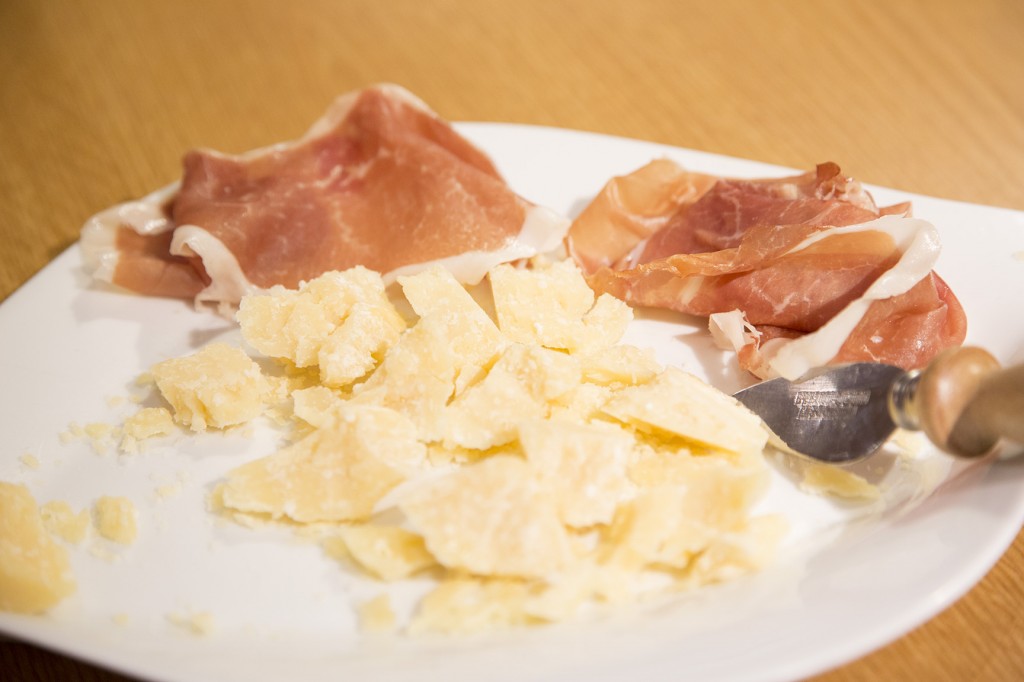 Recently I spent the day at L’Atelier des Chefs with the team behind the Discover the Origin campaign, who are tasked with protecting and supporting five particular PDO products including Bourgogne Wines, Parma Ham, Douro Wines, Parmigiano-Reggiano Cheese and Port. I ‘discovered’ that protecting the origin of food is something I’m very keen to learn more about and support. Added to which, I’m now also a convert to oak-aged Tawny Port – definitely not just for Granny at Christmas.

The European Union’s Protected Designations of Origin (PDO) and Protected Geographical Indication (PGI) schemes take the task of protecting the origin, character and heritage of food very seriously. Once a product is certified, European Law ensures that only products genuinely originating in that region are allowed to be identified as such when sold. It is a way of ensuring that inferior or imitation products don’t get sold under the same name.

Interestingly, in Britain, the Dialogue Agency recently hosted the first forum discussion in Britain on UK protected food names, which not only highlighted the importance of protecting certain foods, but also looked at raising the awareness of protected foods with a view to positively impacting the British economy. In the UK, there are a growing number of protected products, such as Melton Mowbray Pork Pies (PGI), Anglesey Sea Salt (pending PDO status), Single Gloucester (PDO), Blue Stilton (PDO) and English Wine, but we are far behind our European neighbours when it comes to promotion and export. It makes a great deal of sense, that supporting quality producers would have a positive impact on our economy. 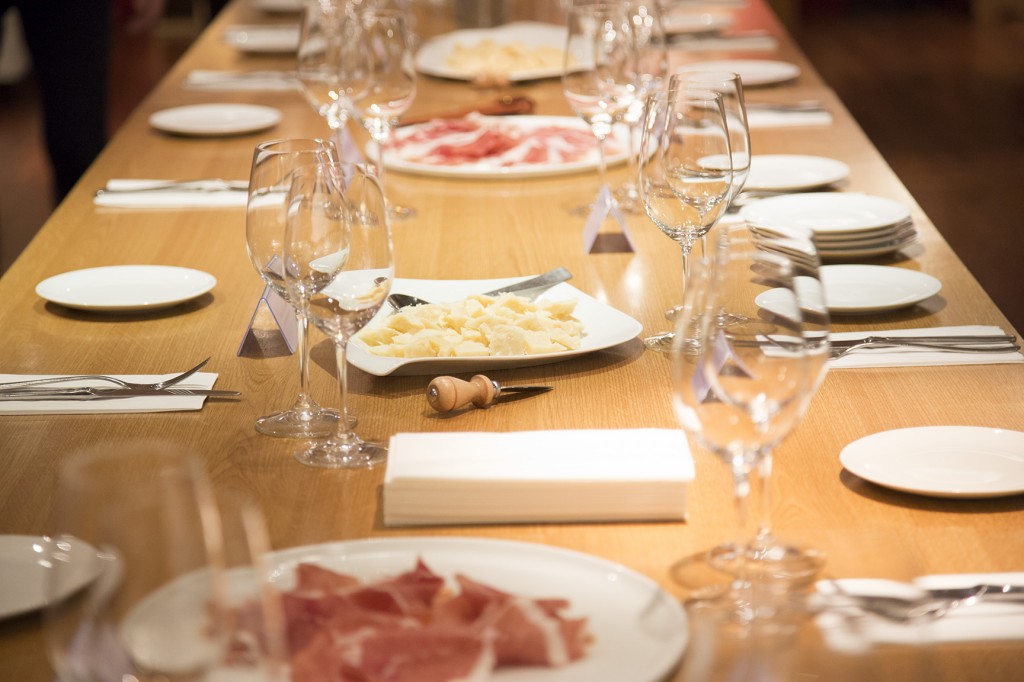 Parma Ham and Parmigiano-Reggiano cheese are perhaps two of Italy’s most well-known and successful exports from the northern Emilia-Romagna region, with a PDO status. I chatted at length to Elke Fernandez who had travelled from Parma to join us for the day about the famous Prosciutto di Parma or Parma Ham, which predates the Roman Empire. The Italians are fiercely protective of Parma Ham. By law, only hams produced and cured in the hills around Parma may become Parma Hams. There is a ‘designated production zone’ within the region of Emilia-Romagna and with only two ingredients: Italian pigs, salt. Added to this you need air and time. Producing Parma Ham is an all-natural process.

Parma Ham is cured for a minimum of one year, but can be cured for up to three years. We tried a 24-month ham and a 30-month ham. Elke explained that Parma Ham is best eaten sliced as needed, not in advance, although pre-sliced Parma Ham can be kept for up to 90 days in the refrigerator, making it a great stand-by ingredient. So, look out for whole Parma Hams, perhaps at your local delicatessen for the ultimate flavour experience and at the very least, look out for the five-point ducal crown brand or PDO logo which denotes authenticity. Parma Ham and Parmigiano-Reggiano can be served on their own, as an antipasti, and go beautifully alongside a gentle fizz.

Parmigiano-Reggiana cheese has a slightly larger production zone, in a region which includes Parma, Reggio Emilia, Modena and very nearly reaching Bologna. Interestingly, the name ‘Parmesan’ is the French term for the cheese, but Parmesan is also the name used as the common term for cheese imitating Parmigiano-Reggiano. True Parmigiano-Reggiano is handcrafted using methods handed down over more than eight centuries and so it matters to read the label to ensure you are buying an authentic product. 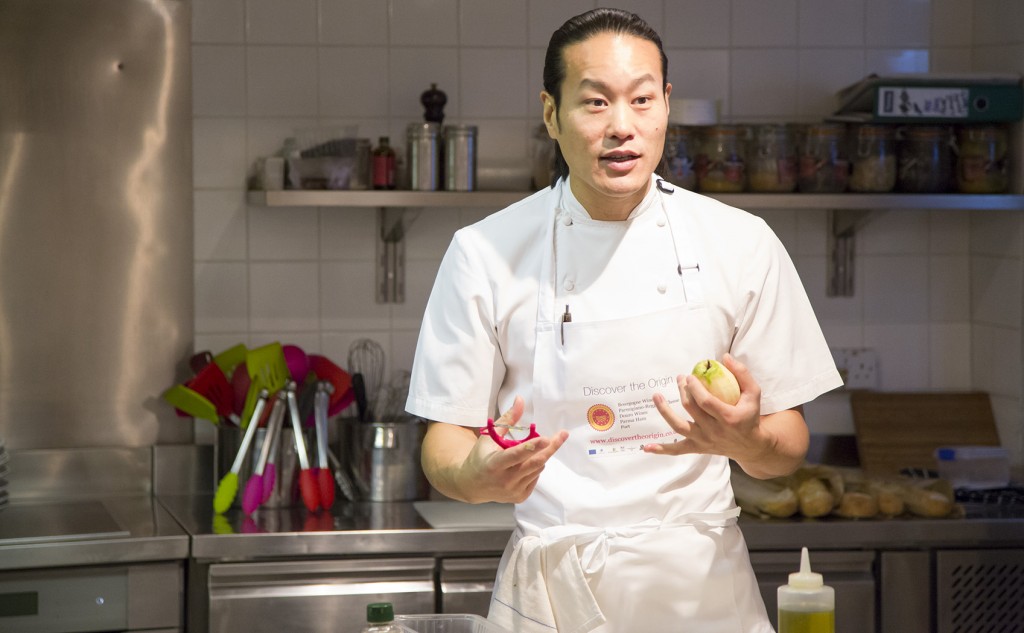 Under Jun’s watchful eye, we made a main course dish of  Baked Chicken with in Parma Ham, Parmigiano-Reggiano and Honey Roast Root Vegetables. Firstly we layered three thin slices of Parma Ham on a board, and then grated Parmigiano-Reggiano over this, along with lemon zest and some fresh thyme. I had never really appreciated how much the flavour of lemon zest could enhance both Parma Ham and Parmigiano-Reggiano cheese, and since our afternoon of cooking, I’ve been concocting lots of lovely recipes with this trio of flavours. 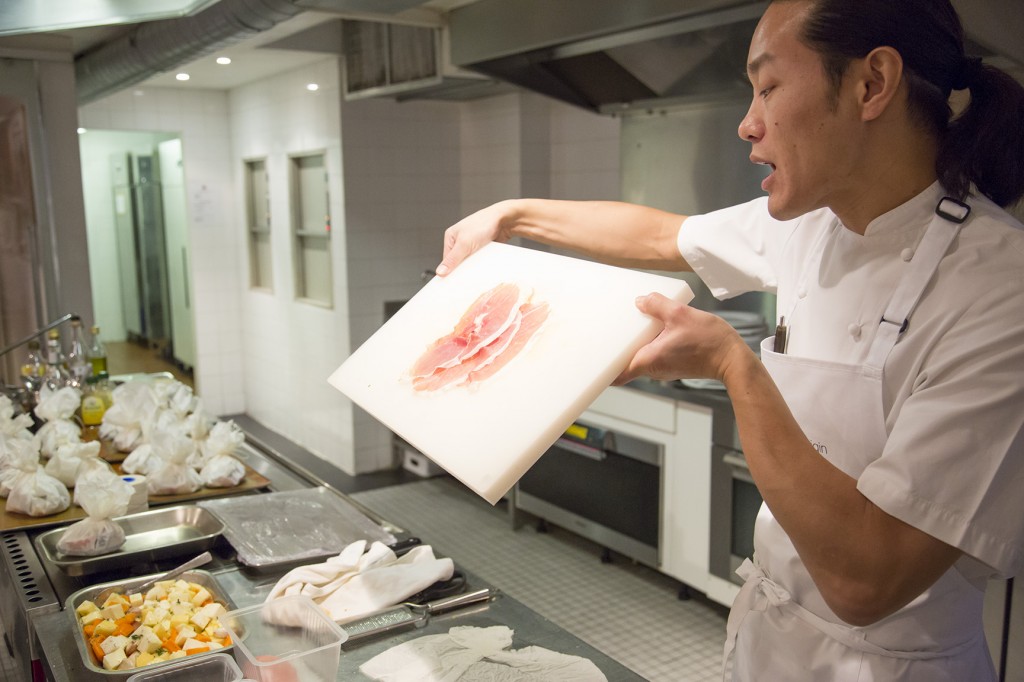 After seasoning a chicken breast, we wrapped it up in the flavoured Parma Ham, sitting it on a bed of seasonal carrots, potatoes, celeriac, swede, garlic and a little drizzle of honey, olive oil and more fresh thyme. Chef Jun very kindly then whisked this all away and baked it in a hot oven for around 35-40 minutes. It helps if your vegetables are all chopped to roughly the same size (ours weren’t as we were too busy chatting!) This was a simple, yet really delicious (and quite impressive) supper dish, which showcased the Parma Ham and Parmigiano-Reggiano cheese well. 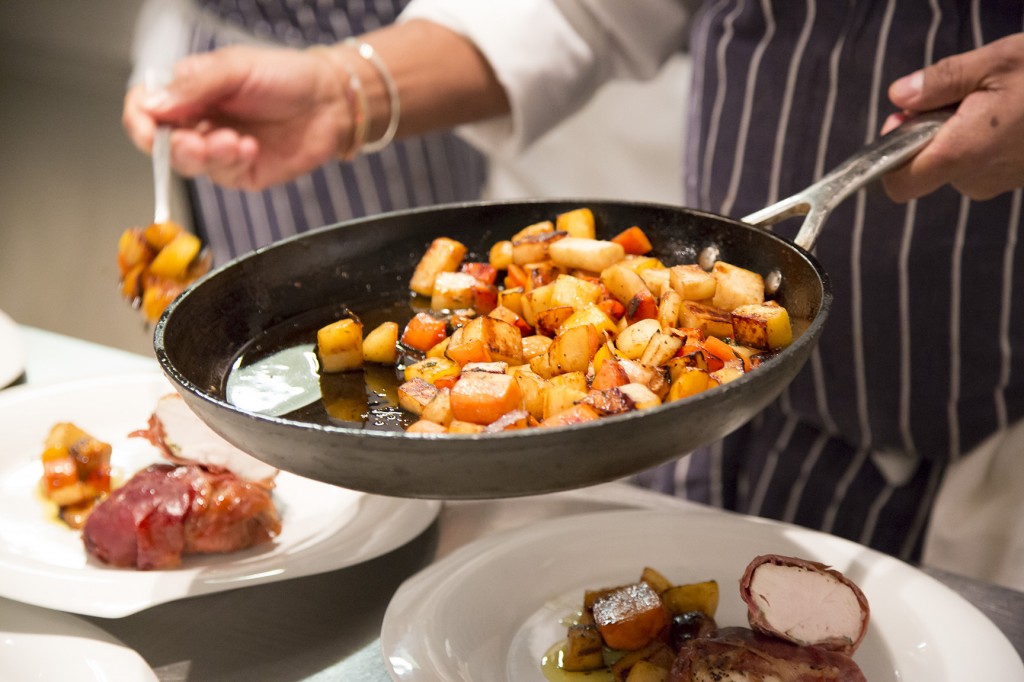 Dinner was served with a Ladoix 1er Cru, Domaine Henri Naudin-Ferrand, 2008, from the Bourgogne in France and a Post Scriptum de Chryseia, 2010 from the Duoro region in Portugal. Both were very drinkable, but the stand-out for me was the Portuguese red. 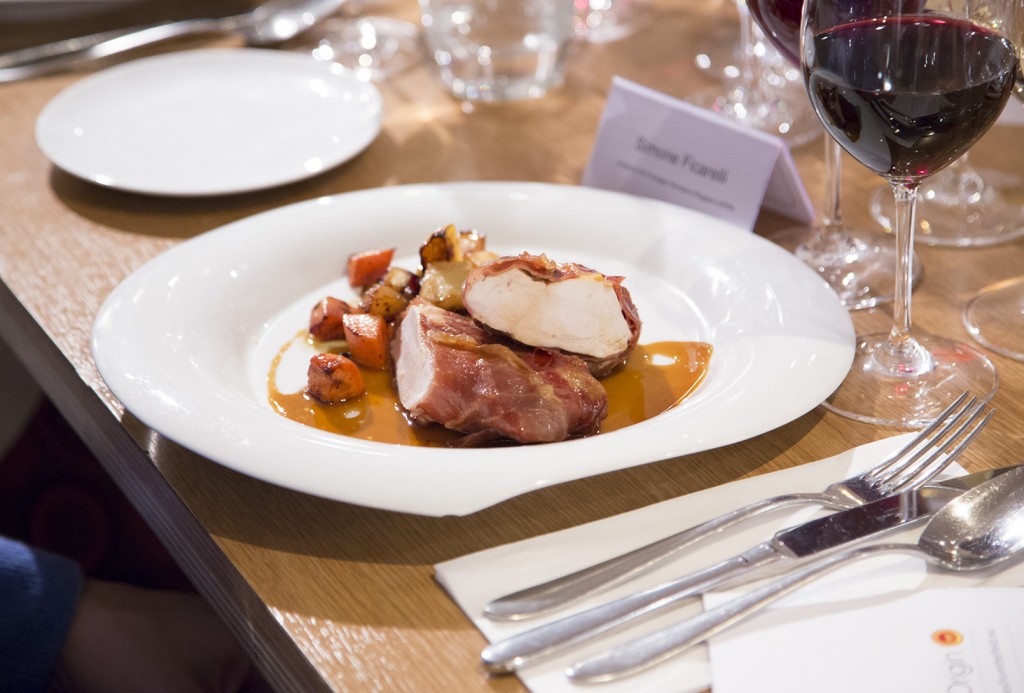 I mentioned Chablis in a recent post. In fact, Bourgogne wines stretch from Chablis to Mâcon. Within the Bourgogne, there are around 3,800 wine domaines with over 27,900 hectares of appellation d’origine controlee. So, how do you pick a good one? Well, a good tip is to choose a Grand Cru, if you can afford it, otherwise, try a Premier Cru or a village appellation; the bottle will carry the name of the village in which it was produced and you should also see the name Bourgogne on the bottle. For example, Crémant de Bourgogne, is a sparkling wine from the Bourgogne region and we drank that with the Parma Ham and Parmigiano-Reggiano antipasti. Pinot Noir is a grape variety from the Bourgogne, whilst Chardonnay originated in the Bourgogne region, too. So, if you are a French wine drinker, it’s likely you will have already tasted, and enjoyed, a wine from the Bourgogne. 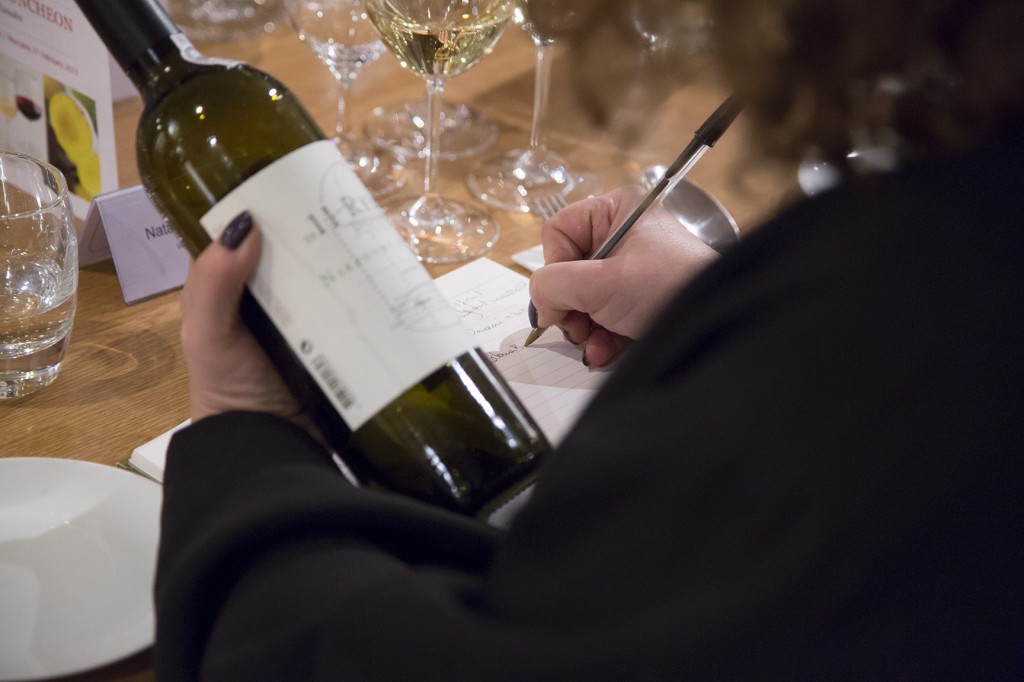 The biggest surprise of the day for me was the Portuguese wine and Port that we tasted. Though I have visited both France and both Italy on a few occasions, I’ve never travelled to Portugal and so I was less familiar with Douro Wines or with the four main styles of Port – Ruby Port, Tawny Port, White Port and Rose Port. Port is really red wine fortified with brandy, which became a popular practice when England was at war with France in the late 17th century. At the time, the import of French wine was restricted and so the English began importing their wines from Portugal. Very often, the wine didn’t make it across in a very good condition, and so they began fortifying the wine with brandy to preserve it.

In 2001, the Alto Douro became a World Heritage Site. It is rich, sweeter, of course, than red wine, which makes it very drinkable, particularly with dark chocolate, milk chocolate, caramel, dark fruits and fruit desserts as well as with several types of cheeses.

For dessert, we made Baked Plums and Pears (En Papillote) With Crème Chantilly. En Papillote means, baked in a bag. We placed our fruit (plums, pears, blackberries and grapes) onto a sheet of baking paper, added cinnamon, a star anise, butter, honey and a drizzle of crème de cassis before scrunching it up and tying it with string. Again, Chef Jun whisked this away and baked it in a hot oven for twenty minutes. To go with dessert, we were served a Fonseca Guimaraens Vintage Port (1996) and a Quinta do Noval 10 Year Old Tawny. The Old Tawny was the definitely the stand-out drink of the day for me! Fortnum and Mason sell a ten–year-old Noval for £18.50, which would make a great gift. 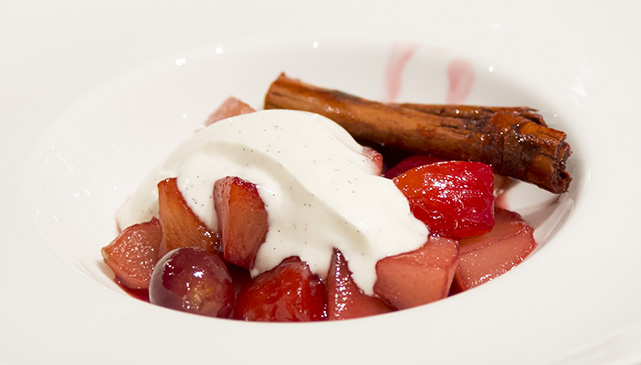 So, after a day full of cooking, eating, drinking, sampling, singing (yes, it was incredibly jovial by the end!) I learnt that by making very small changes to our consumer and buying habits (by checking we are buying authentic produce) we can help to protect artisan producers of specialist products.

Being aware of how and where our food is produced isn’t snobbery; it’s taking control of what we consume. I hope that we can also become prouder of our own artisans and producers in Britain, helping them to maintain the authenticity of their products, too and that we catch up with the number of PDO’s and PGI’s held by our European neighbours.

With many thanks to Discover the Origin for introducing me to some of the producers and protectors of Bourgogone Wines, Parma Ham, Duoro Wines, Parmigiano-Reggiano Cheese and Port.

All photos in this post were taken by Hugo Tyer.

All view are my own.