There’s something about Christmas that makes me want to eat cinnamon and ginger and basically anything sweet.  This week, I happened to be looking for some inspiration for a dish that I could take along to a pot-luck ‘Crimble’ party.

I have a huge trifle bowl from Pampered Chef, which rarely makes an appearance, but I decided that whatever came along with me to the party, this bowl would be filled with something very tasty indeed. 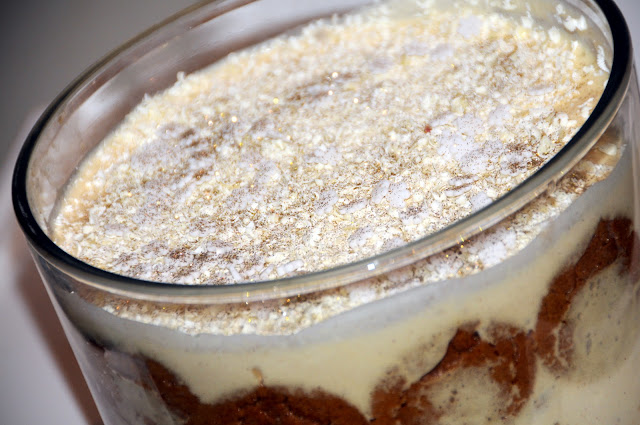 Torn between making a Tiramisu or a trifle, I let the ingredients in my cupboard dictate. I didn’t have any savoiardi/sponge finger biscuits, but what I did have was a couple of packets of ginger snap biscuits (the ones you would usually dunk in a cup of tea or coffee) and a dark and sultry bottle of Tia Maria on my shelf and so my little brain began to tick.

It’s always a little bit dangerous to try and mess around with a classic, particularly an Italian institution such as Tiramisu.  A quick search on the Internet (to see whether I was really crazy) revealed some interesting variations.  There was a Nigella version which called for Baileys Irish Cream and in her new book, Kitchen, she uses Frangelico, a hazelnut liqueur.

What really grabbed my attention was an Italian menu I came across offering a “Tiramisu di Natale” for dessert.   It was described as being made with ginger biscuits, pears and liqueur.  It didn’t say which liqueur and in fact, the truly authentic Italian version would call for Marsala, a sweet wine, a bit like a sweet sherry.  Sadly, the menu was old, so I couldn’t call for a recipe.

Undeterred, I set aboutmaking my own creation. I didn’t use pears (since my friend Chris is fruit-averse) but I’m sure the recipe would work really well with either poached pears or else tinned pears chopped up and added to each layer. You could also try using Ginger Cake instead of biscuits and perhaps Ginger Wine instead of Tia Maria.

My monstrous creation could easily serve 8-10 people, if not more.  Having been chilled in the fridge overnight, on the pot-luck evening it served myself, Monika and Chris with a smidgen left over for our hubbies.  We were firmly in the “lifetime on the hips” territory but it was well worth it.  We promised Chris we’d join her running club in the New Year to compensate!

Please give this one a go over Christmas, or serve it at a New year’s Eve party and let me know how you get on. It may not be authentic in terms of its ingredients, but it is made to a traditional method shown to me by my Italian brother-in-law, Alberto, many years ago. It is also light set, rather than being firm, since it has half the amount of Mascarpone and uses double cream, but its gooey nature truly means it melts in your mouth with an explosion of Christmassy flavour.

You won’t be disappointed!

PS Since this recipe calls for raw eggs and liqueuer it is unfortunately not suitable for kiddies or pregnant ladies.

250 ml Tia Maria (or other liqueur of your choice)

and/or edible glitter from a cake shop

The ingredients will combine better at room temperature.

In your first bowl, whisk the eggs yolks and caster sugar together with an electric whisk for around 7 minutes until the mixture is pale and fluffy. Add your tablespoon of cinnamon and mix again.  Then add in the tub of Mascarpone and mix until there are no lumps.

In your second bowl, whip the double cream until it is quite firm but not over-whipped – around the soft peak stage.  Fold your whipped cream into the egg and Mascaprone mixture.

In your third bowl and with a clean whisk, beat your egg whites until soft peaks form when the whisk is removed.  With a metal spoon, fold the egg whites into your egg, Mascarpone and cream mixture.

Now you are ready to assemble.

In your fourth bowl, combine the espresso coffee and Tia Maria (the coffee can be slightly warm).

Spoon a small amount of your creamy mixture into the bottom of your trifle bowl.

Dip your ginger biscuits or cake into the coffee and liqueur mixture and arrange on top of the creamy mixture to make your first layer.  It is better to soak a few biscuits at a time as you need them otherwise they will go too soggy to handle.

Then spoon some more creamy mixture on top and repeat the process of layering.  If you are using fruit, spoon this on top of the biscuits or cake.

Keep layering until you have used all the mixture. Since I was using a glass trifle bowl. I layered some of the biscuits around the edge of the bowl rather than flat so that you can seem them.  If you run out of coffee and liqueur mixture make up a bit more – it really depends on how much of the liquid your biscuits are soaking up!

Cover and chill in the fridge for at least 24 hours.  This will set the mixture slightly but it will still be quite loose so it is better to serve this in a bowl.

Grate some white chocolate over the top and dust with edible glitter for a real ‘Chistmassy’ finish.

Wishing you all a Merry Christmas and thank you so much for reading my blog! There are lot’s more recipes and posts planned for the New Year.